A Quick Word:
Open for I believe around a year or so only... this is one of the newer sports bars that has an amazing atmosphere for watching sports, but misses big when it comes to the food.  It appears they are trying to offer more creative options, but by doing so, they are just copying a lot of the other bar and grilles in the city.  It is a great place in the South Loop for football though.  This is rare so a lot of people take advantage during Sunday afternoons.  If you want a beer or two definitely stop by but if you want food, I would look elsewhere. 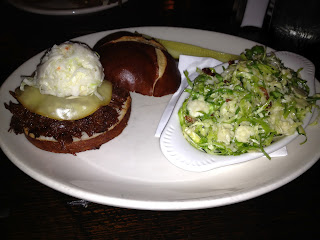 So I was craving a BBQ sandwich for days, and when I saw a BBQ pulled duck sandwich, I was extremely curious.  It is a roasted duck that is shredded, tossed in a BBQ sauce, and topped with both an aged gouda cheese and a creamy slaw.  Everything is served on a pretzel bun which was definitely a great choice.  It is served with a side, which I chose the brussel sprout salad.  Overall, the meal was just ok.  The sandwich had a strange aftertaste; I don't know if it is the actual duck meat or just a strange BBQ sauce.  The slaw was a little too creamy for me... I would have rather had a vinegar based slaw.  And the cheese was not strong enough to be noticed.  The brussel sprout salad also had an aftertaste that was more bitter than anything.  It was served with chopped bacon, cheese, and a vinegar base. 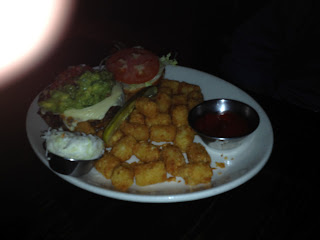 So my friend ordered this burger and substituted the vegetarian option black bean burger.  This particular creation had pepper jack cheese, guacamole, roasted tomato salsa, and a pico de gallo.  It was served on a sesame seed bun.  I tried a bite of it and I thought it was ok.  The burger itself was a little on the mushy side and less "burger-esque."  It had a very bean-like flavor as opposed to other restaurants that try to make the veggie burger close to burger taste.  the toppings were fresh, but is that really that hard to come by these days?  I probably wouldn't order this burger ever but for being the vegetarian option at least it was somewhat tasty. 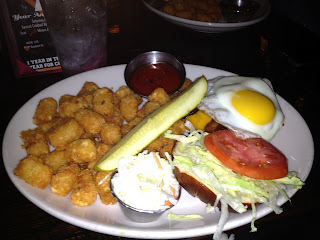 My other friend had a this creation that has been appearing at restaurants all over the city.  A typical thick cut hamburger topped with sharp cheddar cheese, applewood smoked bacon, and a fried egg.  Of course it is served on a pretzel bun.  The size of this burger was excellent.  It was cooked through pretty well though.  It was served with tater tots which obviously reminds everyone of childhood.  Definitely a good burger but nothing really unique. 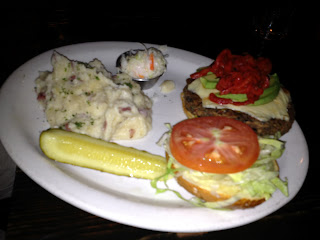 Here is the actual black bean burger and the ingredients it comes with.  Those include a roasted red pepper topping, cheese, and avocado.  Just read the description of the other veggie burger and change out the toppings.  Nothing great... thats how I felt about these veggie options.

The DOs/DON'Ts:
DO:
- Do order the tater tots.  You can't really mess them up, but they give you a huge order and it actually saves the meal from being completely terrible.

DON'T:
- My friends didn't enjoy the veggie burger too much so I would suggest avoiding it.
- Parking is difficult in this area of South Loop so maybe busing or CTA would be best option