A Quick Word:
Flaco's is definitely one of the better tex-mex style mexican restaurants in the city.  Outside of Pilsen, I tend to avoid "Mexican restaurants" but Flaco's is actually pretty good.  Not only do they have fast delivery, their food seems to be more authentic and also their daily specials are something to look forward to.  As you will see from the food that is featured below, the quesadillas are something special. Not many restaurants make good quesadillas, and Flaco's makes them GREAT.  Just about everything on the menu is customizable so you can make it just the way you like it! 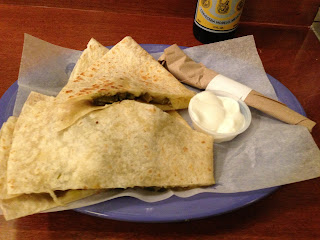 I was introduced to this quesadilla by one of my friends, who seems to be a flaco's regular.  The quesadilla is literally STUFFED with poblano peppers, jalapeño peppers, and Chihuahua cheese.  The tortillas are obviously warmed up and crisped on the grill.  The overall flavor of the quesadilla is an overwhelming poblano.  And, the jalapeños are just there for more of the spice factor.  The cheese makes it a little oily and the way they warm the tortillas also makes the entire dish a little on the oily side.  It is served with sour cream and a couple different salsas.  Each of the salsas is homemade, but unfortunately they aren't as flavorful or spicy as I would like.  I do recommend the quesadilla to anyone. 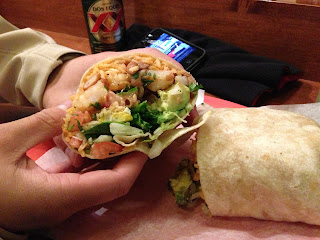 One of my friends ordered the special of the day... this huge shrimp burrito.  It is a burrito-sized tortilla filled with grilled shrimp, rice, beans, a pico de gallo, avocado, and some lettuce.  It is served with the two different types of salsas also.  I was lucky enough to snag a bite or two of this burrito.  I was surprised because it wasn't as fishy as I was thinking it may be.  The shrimp were freshly grilled and sliced into nice bite-sized pieces.  The rest of the ingredients weren't mexican-flavored, but all of them together made that mexican/hispanic style meal.

The DOs/DON'Ts:
DO:
- Do order the quesadilla!  It is one of the better items on the menu, and when you customize it to order, it will not disappoint.
- They do offer beer.  So I suggest ordering when you arrive and have a drink while the food is made for take out.

DON'T:
- I wouldn't plan on bringing a huge group of people to eat at the restaurant.  They probably have a maximum 20 seats on a first-come, first-serve basis.