A Quick Word:
Here is another one of the small restaurants/cafes that are trying to bring the farm to the table.  Local Root restaurant does so, but doesn't really do it well (that is for brunch at least).  After arriving at a restaurant that looks sort of like a small grocery store, we sat down to find an extremely limited weekend brunch menu which was immediately disappointing.  And similar food followed.  Incorrect or not descriptive enough explanations of each entree led to food choices that were regrettable.  I honestly believe the restaurant needs to change their descriptions for sure and also try harder to walk their customers through the menu.  Also, the prices for some of their sandwiches (like the portobello mushroom brioche) were outrageous.  $12.99 for a small vegetarian sandwich with soggy frites... I mean come on.  I thought they were removing the middle man to give a fresher, cheaper option... instead, it is just an expensive brunch restaurant with average food at best. 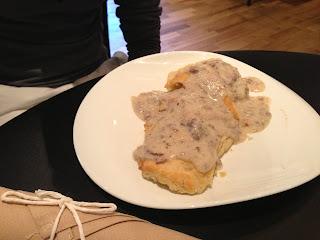 So my older brother ordered the classic biscuits and gravy breakfast entree.  And these were definitely tasty.  The meal consisted of two biscuits sliced in half and then covered in a lamb sausage gravy.  There is a vegetarian option that features a mushroom style gravy... but when he heard sausage gravy his mind was set.  I managed to have a couple of bites.  The biscuit was soft and very rich.  The gravy was a little on the thinner side and the lamb sausage was not noticeably lamb flavored.  Overall, the dish was good, but nothing too different from the other places in the city.  I don't know if this is an everyday menu item or just available on weekend brunch.  But whatever it is, I probably wouldn't order it unless they added more seasoning to the recipe. 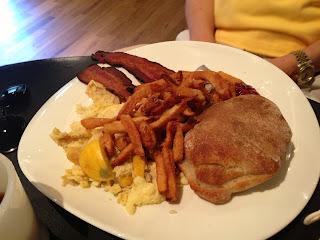 Nothing spectacular... well, this is one of the few breakfast platters they offer.  It features a vegetable scrambled eggs covered in a sharp wisconsin white cheddar cheese, thick cut peppered bacon, frites, and a toasted ciabatta roll served with butter and homemade strawberry jam.  First of all, the restaurant NEEDS to inform its customers that the cheddar cheese is a SHARP CHEDDAR that is DEFINITELY AGED!  When it arrives at the table, you can definitely smell it and some people (like my family) doesn't enjoy cheese, yet alone sharp, aged cheese.  Luckily, I love sharp cheese so I didn't mind eating the egg scramble but it was just disappointing for everyone else.  PLEASE CHANGE THE MENU DESCRIPTION. 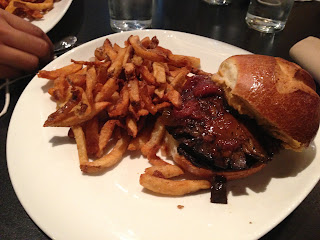 A great vegetarian option that is different than other restaurants.  This sandwich is first of all served on a lightly toasted brioche bun.  It is filled generously with two marinated portobello mushrooms, a black bean hummus, and a strawberry jam.  It is served with a side of frites which in my opinion were a little too soggy and not well seasoned.  The sandwich though was something I would order again.  I just wish the put more of the strawberry jam in the sandwich rather than leaving it on the side. 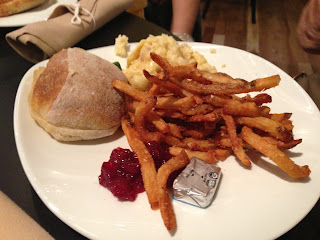 This breakfast platter is one of the vegetarian options that we decided to choose.  The description says organic eggs and organic vegetables and once again a cheddar cheese.  Once again, the sharp cheddar cheese was the enemy of this platter.  Too strong for some people and definitely NOT DESCRIBED on the menu.  The food needed some hot sauce and ketchup which were homemade and not spicy at all.  Definitely nothing special and not the typical farmers breakfast that I would want. (sorry for bad angle in the picture) 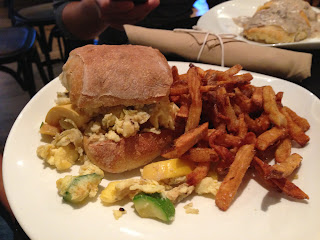 So I didn't personally get to try this sandwich, but I figured it is the exact same as the breakfast platter just arranged in a sandwich form rather than having the toasted ciabatta served on the side.  For that reason, I don't have much of a description except read the above item and imagine it between two pieces of bread.  Once again, nothing here to talk or rave about.

The DOs/DON'Ts:
DO:
- I would come for dinner because they have a much more extensive menu (unfortunately I never have been here for that service so I can't compare it to my experience).

DON'T:
- Don't come for brunch.  The food is nothing special and in some cases disappointing
- Be careful with the silverware and don't put forks on the plates.  The dishes were made in such an awkward way that placing silverware on the plates actually caused them to slide off the edge and onto the table or worst... the floor.  It happened several times and was just annoying.