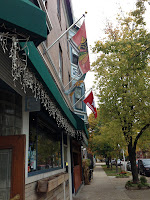 A Quick Word:
This is one of the well-established Packer/Wisconsin Bars in the city.  So bears fans stay away.  I came here though after finishing up the OB/Gyn rotation with the other students and it was a good experience.  The food was about average and the drink specials were nice and cheap.  They offer free popcorn when you sit at a table which was a plus, especially for starving students.  The atmosphere was definitely like being in the backwoods of Wisconsin, which was nice.  One huge disappointment was not having Spotted Cow Beer.  But other than that, it was a decent place, just not for Bears fans. 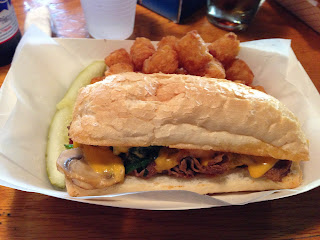 So I chose the cheesesteak sandwich.  I wasn't sure what made it "Willy's" besides being served at his restaurant.  Maybe it was some of the extra vegetable toppings, but I wasn't sure.  Anyway, this cheesesteak was made with thinly sliced steak, melted american cheese, roasted red peppers, spinach, mushrooms, and a homemade chipotle mayo.  All of it was served on a toasted french roll.  The bread was the best choice for all these ingredients.  They still fell out, but the sauces and juices were definitely being soaked up by the bread.  I really enjoyed the sandwich, but I did wish they used a different, stronger cheese and possibly some sautéed jalapeños or anything that gave it a little kick. 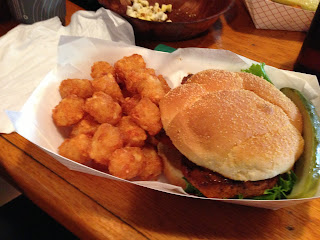 One of the other students from the team had this chicken breast sandwich.  You can choose from either BBQ, blackened, or buffalo, which he chose the latter.  The buffalo sauce was said to be a good heat, but it would be better spicy.  He also didn't care for some of the vegetables placed on the sandwich.  I wasn't able to try this sandwich either, but he said it was good, just nothing he would "rave" about.  It also came with either fries or tater tots... so chose wisely. 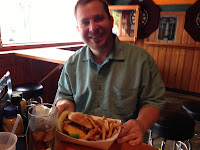 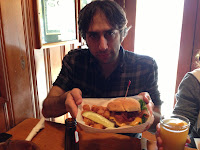 A couple of the other students on our team got the cheddar bacon burger.  They both appeared to enjoy the burger, both finishing them and all the fries or tots that came with them.  The burger itself was a half-pound burger topped with spreadable Wisconsin cheddar, applewood smoked bacon, lettuce, and tomato.  It was served on a corn-dusted bun.  It looked like a good sized burger, especially for the $9.  You can choose either tater tots or fries, which I thought the tots were the better option.  I personally didn't try the burger but it was recommended by the waitress so it has potential to be one of the better items.

The DOs/DON'Ts:
DO:
- Ask for Drink Specials... This bar does have specials running almost all the time so ask!
- Come for Packers Games or Wisconsin Games... this bar is obviously fans of both and supposedly a great place to come watch some football!

DON'T:
- Don't come if you are a bears fan.  You may not enjoy the atmosphere.
- If you want Spotted Cow Beer, don't get your hopes up.  They don't have any here... ya its disappointing.