A Quick Word:
For Americanized Indian food, come to Chutney Joe's to try the infamous "Bombayritto."  The main location has closed, and the current location is not associated with prior ownership (in fact, they do not want to be associated due to lower quality food).  I can see why they don't want to be associated... the food is average at best and the prices are still high enough to be disappointed.  Luckily, they are located in Ogilvie Train Station's Food Court, leading to high foot traffic.  If you are in the area, and not craving the other places, this may be a restaurant to think about trying. 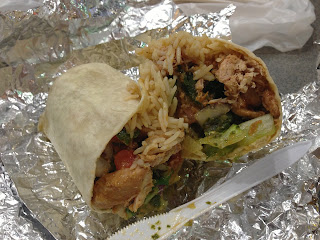 I refer to this unique creation as the "Indian Chipotle."  The Bombayritto is a play on the traditional  burrito that starts with a huge "roti."  I still think they use a burrito tortilla, but I guess it's the thought?  Anyway, you can choose an entree that you would like in the burrito and then of course all the other stuffings.  So, I had the Chicken Tikka Masala as my entree in my burrito; and I chose to have the basmati rice, onion, jalapeño, lettuce, and the cilantro chutney.  They are fairly generous on the ingredients; maybe a little too generous though on the jalapeño. It was really spicy, even for me... and overall, the food was still just ok.  The chicken tikka was more like shredded chicken stewed in the sauce for only a few hours.  It didn't penetrate into the chicken and unfortunately some of the larger spices weren't removed so you can get a huge bay leaf or what not in a bite.  The cilantro chutney was tasty, but I wish they had more of a variety. 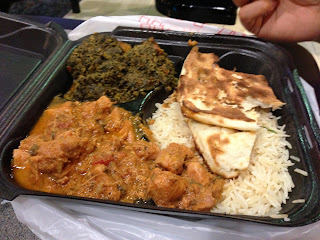 My friend decided on the two entree meal.  For a little bit more cash, you get a significantly larger meal, which is just average as I have been mentioning.  He chose the chicken tikka masala and the palak paneer.  It came with a huge helping of the basmati rice and also 1/2 of a naan.  As mentioned earlier, the chicken tikka was definitely a below average meal.  Too many spices and not enough cooking is not a good combination.  The palak paneer was just ok also. The meal was majority cooked down spinach with just a little bit of paneer.  The spices weren't as Indian as I was liking, but it will do.  The meal is big, so left overs are more than likely to happen.


The DOs/DON'Ts:
DO:
- The best deals are either the bombayritto or the naan sandwich.  I suggest getting one of these.
- Water cup is free here... so even though you are eating in a food court, still ask.
- The samosas here are pricey, but they do taste more authentic. (sorry not pictured)  And. they are baked samosas, so they are a little healthier than other places.

DON'T:
- If you are craving an amazing Indian meal, I wouldn't suggest coming here.  The food is ok, but it is definitely "Americanized" Indian food.