A Quick Word:
Lockdown Bar & Grill is not one of your typical hamburger joints in the city.  With a name including Lockdown, it was refreshing to find that a jail-theme was present throughout.  Burgers are named after death sentences and other police patrolling agencies.  The atmosphere is intense, with rock or heavy metal always playing in the background.  It sometimes gets too loud which is unpleasant if you are trying to have a conversation, but it shouldn't matter because once the burgers appear, no one will be taking anyway.  The food is incredible.  The burgers are well worth the price in sheer size.  They have about a million different toppings to choose from and also offer a build your own mac & cheese entree. The entire concept reminds me of Kuma's Corner, just not as packed.


The Jail House Rock (aka The Fat Elvis) 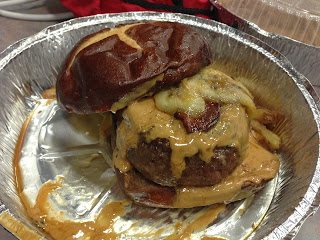 Finally! I was able to try peanut butter on a burger.  This crazy creation at Lockdown Bar was a 10oz burger cooked medium (I asked for medium rare)... topped with peanut butter, banana, and of course thick cut bacon.  They use a nice pretzel bun which is probably one of the only buns that could withstand the sheer weight of the burger and toppings.  You can tell that the peanut butter is added while the burger is still on the grill because it runs down the sides and almost becomes like a liquid consistency.  The overall burger was a little overcooked for my liking, but the flavor was awesome.  It was sweet because of the banana but I expected that.  Unfortunately, after I finished eating the burger, I was disappointed that I didn't have a more savory meal.  I was really glad to have tried the burger, but probably won't be ordering it again. 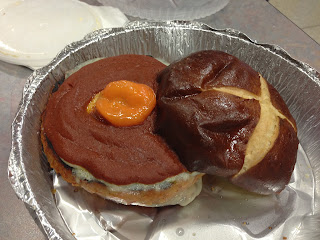 One of my friends chose the Arson burger... and by the name, you can probably assume it was extremely spicy.  The restaurant tops this burger roasted scotch bonnets, lockdown hot sauce, jalapeño jack cheese, and of course a whole habanero sitting right in the middle.  I was able to have a couple delicious bites of this burger.  The heat was perfect when starting to eat the burger and it continued to build.  Unfortunately, my friend didn't realize the habanero pepper in the middle and thought it was just a bell pepper of some sort.  After biting into it, the heat was too intense.  I, too, took a bite of the habanero and it was spicy... not as hot as Jake Melnick's Ghost Pepper Challenge, but still enough to make the rest of the burger unappetizing. Minus the habanero, this may have been my favorite burger. 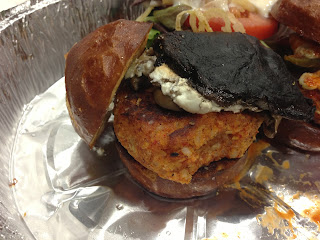 Part 1 of "The Flight Risk".  This option gives you three mini burgers along with fries.  The flight changes frequently, so make sure to ask your server which flight is being featured.  This visit, they offered a veggie burger flight.  This first veggie burger was topped with goat cheese, sautéed button mushrooms, and a portobello mushroom.  My friends really enjoyed the flight, especially this burger! 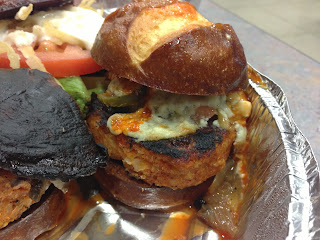 Part 2 of "The Flight Risk".  The electric chair burger creation had spicy roasted peppers, grilled onions, blue cheese, and buffalo sauce.  It kind of reminds everyone of a typical buffalo style burger with more of a kick from the peppers.  Just like the rest of the flight, it was also served on a mini pretzel bun. 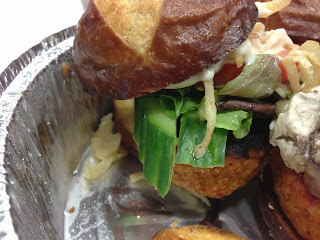 Part 3 of "The Flight Risk".  This is their typical vegetarian option, even though Lockdown Bar will accommodate by making any of the burgers into vegetarian (minus the meat toppings).  I have heard people love coming here just for their vegetarian burger.  This one was topped with baby greens, cucumber slices, tomato, fried onions, and a shallot dressing.  I didn't try this one, but it looked and sounds delicious. 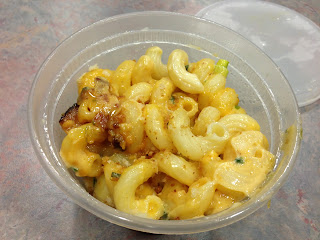 For $2.00 more, you can substitute mac & cheese in place of the normal french fries.  I thought this was a great deal, so I obviously did and had mine with bacon.  It was a healthy portion of mac & cheese and upon first bite, I was reminded of a loaded baked potato or potato skins.  The bacon and cheese and chives probably lead me this way.  It was a great side and I recommend spending the extra couple bucks it. 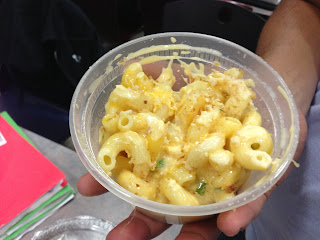 This is the same idea as the mac & cheese listed above.  For the same $2.00, you can also ask them to make it vegetarian, meaning the bacon was not added.  They are a very vegetarian friendly establishment which is amazing. 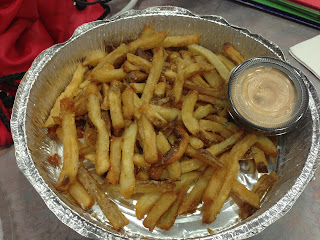 The fries here aren't anything special.  Typical hand cut french fries seasoned lightly with salt and served with some kind of chipotle aioli.  They were good, just a little soggy probably because of take out.

The DOs/DON'Ts:
DO:
- I really suggest coming here if you are craving a Kuma's style burger... This place doesn't have  much of a wait and can easily be ordered for take out.
- Also, be sure to ask about the burger flight... they rotate which burgers are featured and it is probably the best deal at the restaurant.

DON'T:
- The staff here gets kind of annoying.  They are all about fast pace so eating and leaving.  So if you are trying to have a nice longer meal, don't eat here.