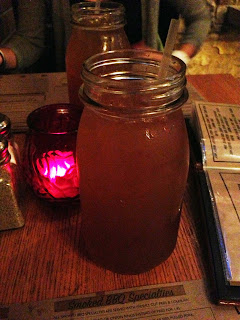 Never thought I would enjoy whiskey and iced tea but this creation is amazing.  It is made with sweet tea, lemons, and whiskey and served in a huge mason jar.  I was surprised how well it went together and was actually very refreshing especially with spicy wings. (sorry for dark picture) 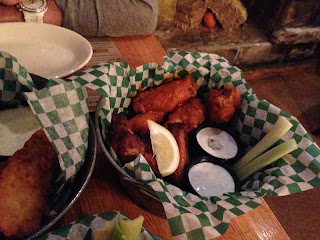 So the combo wings is a great way to try two different styles.  You get the option of Traditional Spicy or Traditional Mild and then Pancho's Special.  It comes with four wings of each variety so eight total which is a good amount for one person because the wings are pretty good sized.  The traditional spicy is like a typical buffalo wing sauce with not much of a kick.  I did wish it was spicier, just not like the ghost pepper wings I previously posted about.  The Pancho special wings are made with garlic and cayenne and I believe are grilled rather than deep fried like the rest of the wings.  The grill flavor was pretty overwhelming, but the cayenne was still strong enough to be noticed.  You can have a choice of either blue cheese, ranch, or in our case, both dipping sauces.  The blue cheese is mild so even if you don't enjoy it usually, this may be the place to try it. 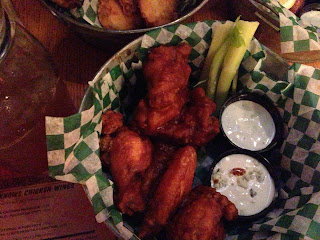 Whenever I see a seasonal special, I tend to try it.  Unfortunately, most aren't that great, especially when pumpkin is involved.  However, I was pleasantly surprised with these wings.  Another eight wings covered in a thick pumpkin BBQ sauce.  The pumpkin flavor was noticeable.  It is more of a sweet flavor that reminds me of honey BBQ with pumpkin pie spices.  These aren't too good if you dip them in either ranch or blue cheese so I suggest not to. 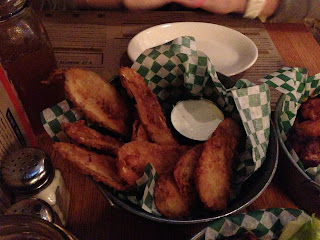 So this item is a first for me.  My friend suggested we get them because she loves them.  And I agree 100%.  These are unreal! Thinly sliced pickles are lightly breaded and then deep fried quickly.  They are served with a buttermilk ranch dipping sauce.  The batter is well seasoned... almost reminds me of a "sour cream & onion" flavor.  What is even better is when you dip the fried pickles into the blue cheese dressing that comes with the wings.  I think this is the best combo so make sure to try it.

DON'T:
- Don't try to eat all the ghost pepper wings.  They are unpleasant and hurt for days after.  If you do though, remember to
- Don't try parking around here.  It is tough and expensive.  I would take the public transportation if anything.