A Quick Word:
Every loves a good burger... right?  DMK is a burger bar that was opened by two great chefs of the city.  This restaurant offers not only the grass-fed beef burger, but also some of the more exotic meats like lamb and bison.  I have also heard it has one of the best, if not the best, veggie burgers in the city.  Anyway,  I found this restaurant to be more of a gourmet burger bar... The toppings are unique, organic, or both.  The price tends to be a little steeper than others with the portions being significantly smaller and the sides at an a la carte price.  The atmosphere is definitely fun; there is a huge communal bar and a bunch of smaller tables.  It always seems very busy; even on Tuesday nights there might be a long wait.  Overall, the burgers are delicious enough to make DMK the talk of the city for a while now, but the price and portions are starting to scare people to the other burger joints in Chicago. 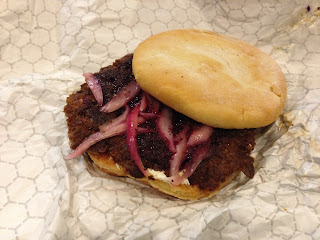 Anyone could probably peg me for this burger after glacing through the menu... Anyway, this DMK creation had a bison burger patty, fresh goat cheese, pickle red onions, and a blueberry BBQ sauce.  They serve their burgers on a homemade freshly-baked bun which is unreal.  The bread has a nice crust on the outside to keep all the juices in but is not as heavy or thick as a typical pretzel bun that most burger joints have converted to.  The patty was well cooked and a thick helping of goat cheese was spread on the bun.  I loved the tanginess the goat cheese added to the burger and the creamy texture as well.  The blueberry BBQ sauce was very subtle; only a little sweetness was added.  I did wish they had some kind of thick blueberry preserve rather than just a blueberry flavored BBQ sauce.  The pickled onions were a simple ingredients that gave a nice crunch... not much flavor though.  It was an interesting creation... and you have to LOVE goat cheese if you want to enjoy it.

The DOs/DON'Ts:
DO:
- The fries were pretty good.  I didn't have a picture, but the wisconsin cheddar fries is a nice side to share.  The large order will definitely be enough for 2 or 3 people.

DON'T:
- I wouldn't order out.  I heard some of the others people say that the burgers seem a lot smaller when you order out.
- Don't come in with the mindset that you are going to get a huge burger like the other places in the city... I find this place to be more of a gourmet burger bar.