A Quick Word:
As soon as I heard waffle sandwiches were coming to the West Loop area, I was sold on trying Wafel. With a similar concept to Bel 50, I was wondering which restaurant would top my waffle sandwich list.    And without question... it WASN'T Wafel.  This restaurant features a more "to go" style atmosphere.  They serve pre made leige waffles and also Fold & Go waffle sandwiches.  From the savory fried chicken waffle to a not so typical apple and brie waffle, they have options for everyone.  Unfortunately, we encountered waffles that weren't hot... and in fact, were room temperature at best.  I enjoy hot food from restaurants, so this was a huge disappointment.  The next awful experience was the service.  After ordering food for dine-in, we were given waffles stapled up in bags with no napkins, plates, nothing.  The cashier proceeded to say... "Oh, the paper plates and stuff you can grab over there."  He wasn't even busy, just sitting behind his iPad cash register probably wondering how long his restaurant will stay open.  The waffles were ok... much smaller than Bel 50 and less crispy.  Because of mediocre food and awful service, I think I was generous with a 2.5 mile rating.  We may differ in opinions, but try Bel 50 first, and you won't be disappointed. 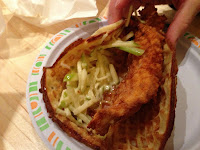 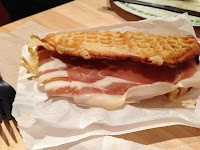 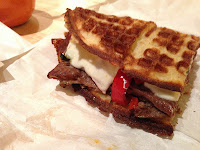 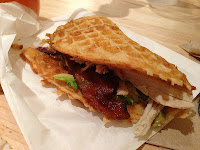 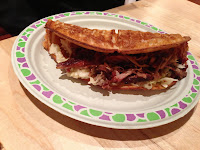 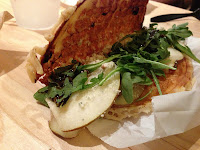 We had so many sandwiches, I decided to break it down to the basics rather than all the details behind each waffle sandwich.  First of all, each sandwich is made with a thin waffle base that acts just like bread.  It had a little sweetness to it, but in my opinion, was more neutral than anything (very disappointing).  There are plenty of toppings that can go inside as you will see below.

The group's favorite was the Fried Chicken Waffle.  This sandwich had a freshly fried chicken breast, maple syrup, and an apple slaw.  Just imagine being able to eat fried chicken and waffles on the go... it is great.  The apple slaw gave the sandwich a freshness taste.  The chicken was the only part hot on the sandwich.

The serrano ham waffle was easily the next best.  This waffle was packed with a generous serving of serrano ham, manchego cheese, quince chutney, and some arugula.  This one was a little more pricey, but definitely worth it.  The sweetness from the chutney which complimented the salty ham.

The Turkey Club Waffle reminded me like a club sandwich.  Turkey breast, avocado, bacon, tomato... what else is needed?  The avocado was creamy enough to act like a sauce and the rest... well you can't really mess up a club sandwich.  Maybe I was already disappointed with the restaurant when trying this sandwich, but still... not that impressive.

A couple of the other waffles that were on the subpar rating include BBQ pork (extremely dry, tasted like it was frozen meat) and the vegetarian waffle (made with apples, arugula, and goat cheese).  Both weren't impressive, and in fact, I would never order them again. 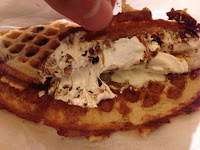 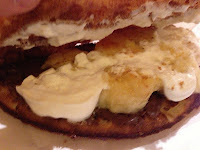 Now the dessert folds were something else.  This is how I picture waffle sandwiches to be... maybe because I have a sweet tooth or maybe because these were that good.  We ordered two to split.  First was the S'more fold.  This waffle was filled with a dark chocolate, marshmallow cream, and a graham cracker topping.  There was a lack of graham cracker, but the chocolate marshmallow combo was perfect.  The other dessert waffle was the Banana Nutella Fold.  It was simple... banana, nutella, and whipped cream filled the waffle.  If anyone didn't know, nutella is a hazelnut chocolate.  Everyone knows the chocolate is best eaten with bananas.  I still prefer it on crepes, but the waffle is next best option. 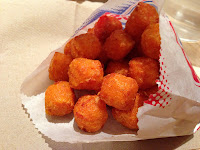 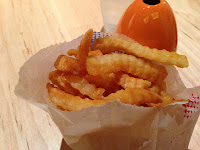 After the cashier raved about how great the tater tots were, we all decided to order a couple sides to split.  I was disappointed to find frozen sweet potato tots and fries that were double fried, probably because they were pre-fried and not ordered due to the lack of customers.  I didn't like these at all and would rather spend the money on a dessert fold.

The DOs/DON'Ts:
DO:
- Fried Chicken is the best option.  This is cooked to order so the chicken is hot and crispy.
- Do order the sweet potato tater tots... definitely frozen before fried, but can't complain.

DON'T:
- Don't expect this to be a cheap lunch/dinner.  The sandwiches with tax will run you at least $7 and after dessert waffle, you will be closer to the $15 region.  Personally, I wasn't even full after one of each. 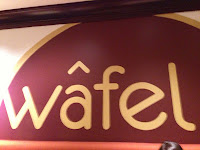