A Quick Word:
So, it is late night eating time... and we are wondering around the city.  My friends and I tend to gravitate towards the Greektown area, mainly because of proximity.  We always end up at either Taco Burrito King or Mr. Greek Gyros.  This time was gyro night.  When walking into Mr. Greek Gyros, you will most likely encounter a line full of intoxicated students.  Everyone orders the gyros, which is a huge meal.  They cook everything to order, so it takes several minutes and comes out piping hot.  Unfortunately, the food on a night without drinking is pretty bad.  Bland, fatty, and covered in sauces to disguise the other flavors is how I see the restaurant.  The service is pretty bad as well.  The restaurant is not clean at all.  I would definitely give this restaurant an average 3 mile rating after a night of drinking, but a 1 mile rating is all it truly deserves. 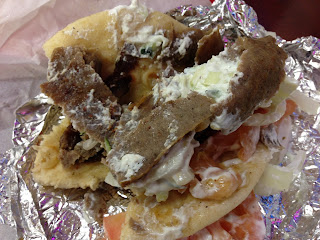 Whenever we end up in Greektown after a night of drinking, Mr. Greek Gyros is one of our most frequented stops.  I always order the Gyros Meal which includes a huge gyro and fries.  The gyro has plenty of beef/lamb meat, tomato, raw onions, tzatziki sauce, and is all served on a thick pita.  They definitely do not skimp on the meat, and in fact, it can be overwhelming how much is on the gyro.  The are a little heavy on the tzatziki, so if you don't like your gyro covered, be sure to specify a lighter amount.  The raw onions are a rough after a night of drinking.  I once made the mistake of ordering this for a normal lunch... I felt awful and never wanted it again.  The fries are extremely plain.  There is absolutely no salt on them.  I am addicted to their sweeter ketchup though. 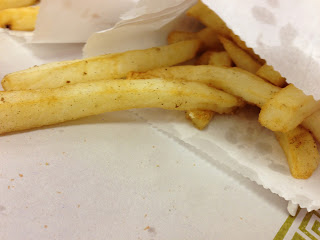 The DOs/DON'Ts:
DO:
- Do come here for late night.

DON'T:
- Don't eat here for an actual meal during the day.  It will not only ruin your late night spot, but it will also make your stomach hurt.

(But, definitely 3 mile rating after a night of drinking!)

Posted by Joseph Esparaz at 7:25 PM