A Quick Word:
Another well-established food truck in Chicago is The Tamale Spaceship.  Home to the masked-sombrero-wearing owner, this silver vehicle parks in various locations of downtown Chicago to serve homemade tamales to city goers.  They have a huge variety of tamales from vegetarian to the typical shredded pork ones.  Each comes with some kind of sauce that adds much needed moisture to the tamale.  I was disappointed in the fact that each order came with two of the same tamale.  I wish you could do a mix and match so I could try more than one type of tamale.  When it comes to all the food trucks in the city, I would consider this to be above average, thus giving them a 3.5 mile rating. 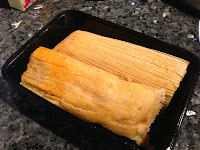 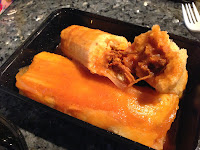 After staring at all the different tamale options, I just went ahead and asked for a recommendation.  The masked man in a sombrero recommended the Picturesque de Puerco (which happened to be the first item on the menu).  This roasted pork tamale was made with traditional massa and wrapped in a corn husk.  It comes with a tomato-habanero sauce and supposed to have a side of purple pickled onions.  After unwrapping both of the tamales, dump the sauce all over.  The massa will quickly absorb most of the sauce, giving that spicy mexican flavor we all love.  Unfortunately, my order lacked the advertised purple pickled onion.  That was disappointing because I truly thought some kind of acidity was needed to complement the dish.  The pork was nothing special, just shredded and a little chewy.  When comparing to other tamales I have had the past... I thought these were a little on the dry side still.  They are good size, so one order is all that is needed for a filling lunch.

The DOs/DON'Ts:
DO:
- Do follow them on twitter.  This is the only way to find their location.

DON'T:
- Don't come by yourself... the tamales come with two in a container and no mixing and matching allowed.  It is very disappointing if you don't share with someone.

Posted by Joseph Esparaz at 7:30 PM