A Quick Word:
Two of my friends arrived in the city late Friday night and we knew Saturday would be a perfect day for day drinking.  We decided on Haymarket Pub & Brewery to enjoy a couple of drinks while sitting on their outdoor patio.  The service was excellent and the variety of beers was extensive.  They offer several sizes which allows customers to try a variety of beers without dipping too deep into their wallets or losing their minds.  I haven't had the food yet, but from the beers and service, I am confident with a 3.5 mile rating.  I hope the food will bump this bar even higher!

Disclaimer:  I just started to learn more about beers and still do not consider myself adequate at rating them or describing them.  I certainly tried, but like all my other posts, these thoughts are just my opinions! 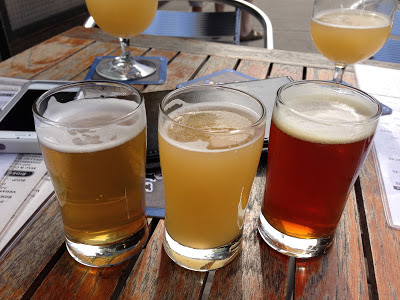 After arriving at Haymarket, I noticed they had a huge selection of IPAs and wheat ales.  These were great for summer drinking and where else would be better to drink than the outdoor street patio.  I ordered several of the 4oz. samplers to give more of their beers a chance.   (Described from L to R)

Unfortunately, I forgot the first beer I chose.  I know it was Haymarket's try at a Hefewiezen which is also a wheat beer.  It was crisp and I believe had some lemon flavors that shined through.  I probably would prefer the other two over this beer.

A Mash Made in Heaven VI - White Peach Wit.  This beer is a belgium style wheat ale that reminded me of a blue moon but even lighter.  Rather than just an orange flavor, a few peach notes were tasted by both myself and my friends.  It was lighter and sweeter than expected and an incredible beer for the summer.

Mathias Imperial I.P.A. was a higher alcohol content beer at 10%.  It is extremely hoppy, but does have a few citrus notes that made it a little more palatable.  I am starting to love the hoppiness of I.P.A.s, but my friends weren't big fans.

The DOs/DON'Ts:
DO:
- Do come for sports games.  They have plenty of TVs and lots of seating both indoor and out!

How far would I walk for this beer?

Posted by Joseph Esparaz at 8:28 PM