A Quick Word:
After spending an afternoon watching the Blackhawks game at nearby Lakeview bar,  one of my buddies and I decided to try this knew tavern/lounge restaurant... Tommy Knuckles.  The menu sounded interesting with plenty variety of sandwiches and pastas.  After ordering, we had some of the worst service with forgetful staff and dirty napkins.  The wrong meals were brought to our table several times and the bill was forgotten several times after requesting.  The experience was also tainted by an overcooked burger despite having some of the most interesting toppings I have ever seen.  The food did bring up my overall rating, but because of the service and big misses in some of the food, I could only give this new restaurant a 2 mile rating.  Maybe they are working out the kinks?  Or maybe it just isn't that good... I guess time will tell. 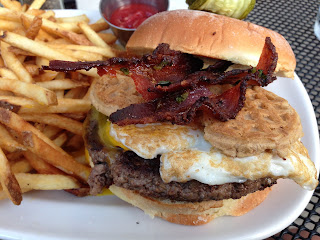 Listed under the knuckle sandwich category, I wasn't sure if this was a burger or what.  After asking, the server clarified that almost all the knuckle sandwiches are burgers except for a couple.  Anyway, I stuck with my choice which was a beef burger topped with a fried egg, a waffle, candied bacon, and a BBQ aioli.  It was served on a typical hamburger bun.  From the first bite, I immediately noticed an overcooked, dry burger.  I requested medium rare but encountered a more well done patty.  The waffle was out shined by the char flavor... even though it was an interesting attempt at a topping. The candied bacon wasn't that sweet and the egg yolk was popped before it reached my table.  I don't know, but the burger was just not that great.  The fries with the runny yolk were still crispy and rich.  A good side to just a subpar burger. 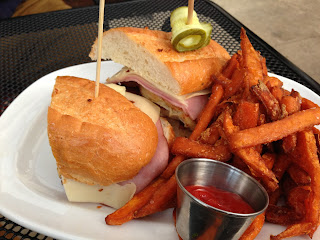 My buddy ordered the chicken knuckle sandwich.  This was not a burger... but rather a fried chicken breast that was topped with "shaved ham", swiss cheese, a dijon aioli, and served on a hoagie roll.  The sandwich was huge.  The chicken breast was served piping hot so it was still crispy.  But the most disappointing part was the so called shaved ham.  It was just deli ham slices stacked on top.  Very disappointing when you are thinking holiday ham shaved off the bone.  The sandwich reminded me of a cuban sandwich--just not as good.  It came with sweet potato fries which were significantly better than the regular fries.  Pretty good sandwich; just a more accurate description is needed.

The DOs/DON'Ts:
DO:
- Do order the sweet potato fries.  I think that was the best part of all the food we tried.

DON'T:
- Sitting outside here was a mistake.  The service outside was horrible.  I don't know if it was just our server, but it seemed like everyone wasn't have the best service out here.
- Almost no parking around the area.  Don't drive.

Posted by Joseph Esparaz at 2:55 PM