A Quick Word:
After falling in love with Ian's Pizza and hearing that it had closed... I was disappointed.  Luckily, a similar joint, Dimo's Pizza, opened in its space.  I still am a little confused on the actual story behind Dimo's and whether or not Ian's renamed itself as Dimo's, but regardless, I encountered delicious pizza with the most interesting toppings.  A thin crust pizza has toppings that could be eaten alone or toppings that are typically served on other vessels.  Unfortunately, some of the slices are big misses--blandness is the first word that comes to mind.  I can't wait to try more of the toppings... especially the s'more slice, but overall I could only give Dimo's a 4 mile rating.  Maybe because some slices are struggles, but more likely because Ian's Pizza was imitated and not perfected. 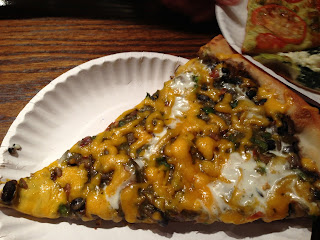 Our first choice was the burrito pizza.  We chose the guacamole burrito slice which contained black beans, rice, guacamole, cheddar cheese, and a drizzle of sour cream.  The other option would be a spicy chicken burrito, but guacamole sounded better.  When you first bite into the slice, you really get confused if you are at a mexican joint or a pizza place.  The burrito actually tasted somewhat authentic and was tasty.  The guac gave a nice creamy consistency. 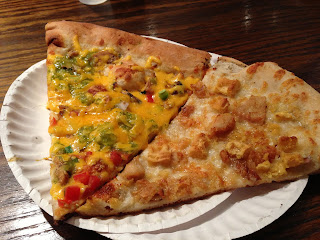 Once I saw Fried Chicken and Waffles on the menu, I knew I had to try this slice.  The slice was made with breaded chicken fingers and mini waffles chopped into bite sized pieces.  They were sitting on a creme fraiche base, topped with mozzarella cheese, and drizzled with both maple syrup and melted butter.  Unfortunately, I was extremely disappointed with the slice.  There was no flavor whatsoever.  In fact, I couldn't tell you if it was chicken, waffles, or even pizza at all.  I would never order this again unless they find someway to make the chicken more moist and have more flavor.

Mexican themed pizzas are very popular at Dimo's.  This spicy chicken taco slice is honestly their buffalo chicken with a Mexican twist.  It is topped with marinated buffalo chicken, pico de gallo, mexican seasonings, and both mozzarella and cheddar cheese.  There was a really good spice to the pizza slice; I wasn't sure if it was from the buffalo seasoning or the jalapeños in the pico de gallo.  It really tastes like a taco and I really suggest getting this slice. 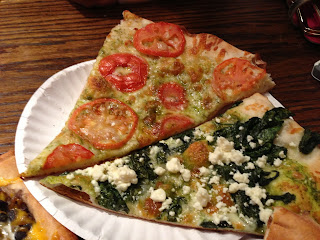 For a more fresh slice of pizza, the spinach feta pesto slice is the way to go.  It is topped with sautéed spinach, mozzarella cheese, and crumbled feta cheese.  A pesto base is used which gives that Italian flavor.  It was another great slice to enjoy.  It broke up the greasy feel from some of the other slices.  The spinach and feta combo also reminded me of Greek flavors... so maybe this slice is a little confused, yet still very tasty.

After ordering so many intricate slices of pizza, we all decided to try a simple one.  The tomato pesto pizza is exactly what it's name describes... sliced tomatoes, extra mozzarella cheese, and a pesto based sauce.  The thin crust is still a perfect vessel for the toppings.  The pesto is basil heavy so I really enjoyed it.

The DOs/DON'Ts:
DO:
- I encourage sharing.  There are so many different slices that sharing is the only way to try a majority of them.
- Do call ahead and ask for the specials.  They have a weekly rotating slices.

DON'T:
- Don't come during Cubs games... the place is ridiculously packed.
- Don't drive to this area.  Street parking is scarce and sometimes impossible.

Posted by Joseph Esparaz at 7:36 AM