A Quick Word:
In Chicago, BBQ restaurants are hard to come by.  With the motto, "Low and Slow", Smoque BBQ has slowly, but surely been establishing themselves as some of the best in the city.  In fact, it has even been featured on the Food Network.  Tourists and locals flock from all over to the Irving Park neighborhood, several miles outside of the main downtown Chicago.  After the long trek, you are greeted by a smokey smell that fills the air.  Their meats have been smoking for hours... some longer than 12, but all are smoked until they are perfect.  Unfortunately, in my experience, I was encountered by an "over-smoked" pulled pork sandwich that was unpleasant to taste.  But after looking past this flaw, I tasted some mouth watering brisket and incredible sides.  With plenty of seating, customers can lounge around in this relaxed, BYOB atmosphere.  The food comes on metal trays, giving you that southern style feel.  Overall, I decided on giving Smoque 4 miles... mainly because of the huge miss on the pulled pork, but also because rib tips weren't offered on the menu (my favorite). 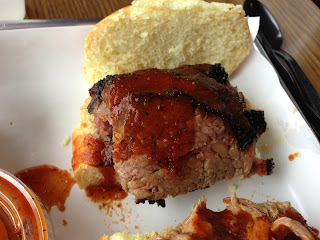 The brisket at Smoque BBQ has been cooking for over 12 hours and comes out fall apart tender.  You can choose either slices or chopped and of course it comes with a side of their BBQ sauce (described later). There is a a heavy smoke flavor that penetrates all the way through to the center of each slice.  You can tell they use a full brisket packer cut because of the thick fat layer that remains on some of the slices.  Overall, the main flavor appears to be black pepper.  This may be a key part of their spice rub, but obviously this secret is not shared.  Regardless, add some of their vinegar based BBQ sauce and enjoy this amazing sandwich.  Next time I will be ordering the brisket dinner for sure. 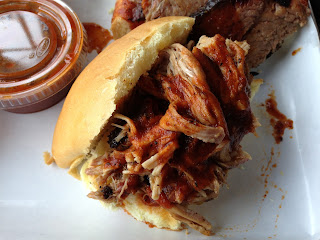 I also ordered a half of the pulled pork sandwich so I could try more of Smoque's meats.  The pulled pork was smoked over apple and oak wood which was a little confusing since the oak would defnitely overpower the apple... and it did.  After biting into the sandwich, I was left with an ashy smokey flavor that was more unpleasant that tasty.  BBQ sauce was definitely needed to cut some of that smoke flavor.  And also, the pork was drier than expected.  Definitely will not be getting pulled pork here again. 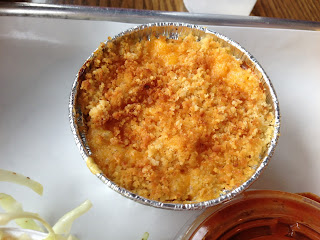 The mac and cheese here is amazing.  It is definitely some of the richest mac and cheese I have ever eaten.  I am unsure which cheeses they use, but a strong sharp cheddar defnitely overwhelms the palate.  The consistency is my favorite part.  Rather than "soupy" like other restuarants, this side dish's cheese tightened up just enough to make it more creamy and thick.  There is a bread crumb crust to the mac and cheese which gave just enough crunch to add a contrasting texture.  Definitely order this side! 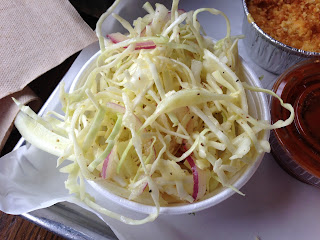 The slaw at smoque is interesting... it is simply made of cabbage, a little red onion, and a vinegar based dressing.  The cabbage is extremely crispy probably because they don't mix the dressing together too early or maybe there is just enough turn around that the slaw is frequently being made fresh.  Whatever it is, a crunch accompanies every vinegary-based bite.  Definitely a good palate cleanser in between BBQ bites. 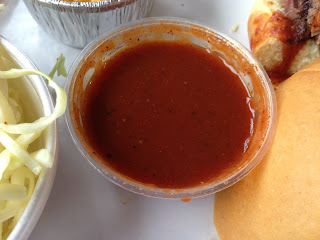 I was pleasantly surprised to see a more vinegary based BBQ sauce offered at Smoque.  I understand that different regions have their own specialty so I guess vinegar based was that far off.  Anyway, the BBQ sauce had almost no sweetness to it.  In fact, it was very peppery.  I personally like sweet BBQ sauces or mustard-based BBQ sauces.  The one at Smoque was neither, but it still had a nice background heat that made me add more and more to each bite I took.

The DOs/DON'Ts:
DO:
- At first, the restaurant appears confusing.  Walk in, look at the huge chalkboard menu on the wall (somehow I missed this completely and ordered from the paper menu near the register), order at the cash register, and let them know you are dining in.  Someone will tell you which table to sit at.  Wait for your number to be called and enjoy!  After eating, one of the bus boys will come clean up after you so no worries.
- Plenty of free parking around and not much public transportation so driving is ideal.
- BYOB --  you know what that means...

DON'T:
- Avoid the pulled pork... all you taste is smoke and dry meat at best.  I was disappointed, but maybe just got an overcooked batch? 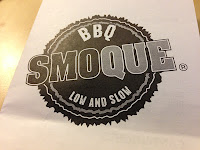 Posted by Joseph Esparaz at 6:30 PM