A Quick Word:
In my opinion, Frontier prides itself in having an extensive beer menu, but an even better wild animal meat menu.  Located just off the highway in the West Town neighborhood, Frontier may be best known for offering whole animal service, including and entire wild boar.  But if you don't have a large enough group or appetite to take down the whole animal service, you can order a variety of small plates that uses different types of unique meats.  From antelope to alligator, everyone will have an option that they are willing to explore.  I personally was even more surprised when an oyster menu hit our table.  One knock on the restaurant is the small tables they expect you to eat it.  When ordering several small plates, the tables become an annoyance.  The food overall is pretty good, but unfortunately, some of the sides on each dish outshines the main item.  For those reasons, I decided to give Frontier a strong 4-mile rating.  I will be back!  (They are on drink deck, which saves 20%.) 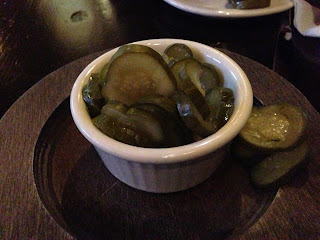 Easily the best pickles I have ever eaten.  Frontier has two options for their house pickles--either dill or habanero.  I highly suggest the habanero if you enjoy spicy food.  They have an amazing heat component that is surprisingly cut well by the vinegary pickle brine.  Your mouth is still left with the memory of eating habanero but without the craving for that huge glass of milk.  For a couple bucks, you get a side order of these crisp pickles.  A MUST order! 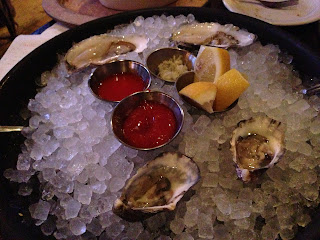 It was a nice surprise to find out that Frontier was also an oyster bar.  I am unsure if this is all the time, but a small oyster menu accompanied their regular one.  We decided on choosing an oyster from each of the coasts.  My friend hasn't really had many oysters in the past besides one time, so we played it safe by ordering more mild oysters and a bunch of their cooked ones (see below).  The oysters were fresh, and served with their homemade horseradish, homemade cocktail sauce, and homemade hot sauce.  Add a little of each, and a squirt of lemon.  Delicious! 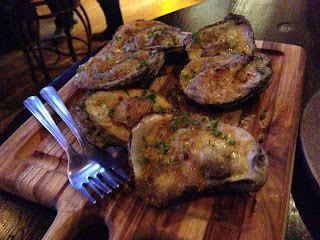 This was a Frontier's version of an Oysters Rockefeller.  Freshly shucked oysters are topped with an herbed butter, brioche crumbs, and parmesan cheese.  They are placed under a broiler until the heated throughout with an incredible crust formed by the brioche crumbs.  The herbed butter makes these oysters extremely rich.  I suggest ordering a minimum of 6--you will want more.  I guarantee it. 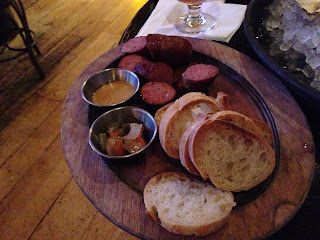 The wild boar sausage was more like a kelbasa rather than charcuterie that I was expecting.  We were able to choose two different sauces/toppings--molasses mustard and house-made giardinera.  The sausage and toppings came with plenty of sliced french bread.  The sausage itself was very peppery but still had a gamier flavor than typical polish or italian sausage.  The main spice that overwhelmed the sausage was simply black pepper.  I loved the mustard sauce and highly recommend it.  The giardinera was good, but nothing spectacular.  Maybe next time order a cheese to go with this dish? 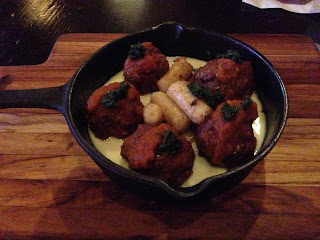 The next wild animal meat we chose was antelope.  The meatballs were served along side gnocchi and both whipped gouda and sage chimichurri sauce.  The meatballs were very moist and had a little bit of smoked tomato which complimented the flavor of the meat.  The gnocchi was great consistency--soft, yet still enough substance to give it a nice shape.  The sauces were the best part.  The gouda sauce lined the pan and was very rich.  Make sure to dip everything in that sauce, and I suggest eating both gnocchi and meatball at same time. 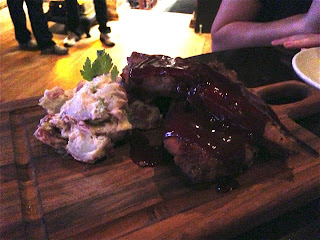 Yeah... the gator ribs is probably the one dish I wouldn't order again.  These alligator ribs from Louisiana were covered in a peach BBQ sauce and served along side a red potato salad.  First of all, the consistency of the ribs were strange... very cartilaginous.  The meat was very tender, but had strong gamey flavor (trust me it doesn't taste like chicken).  The BBQ sauce was just as bad.  Supposedly being peach BBQ, you would expect sweet, but all I tasted was a bitter tanginess.  Even though it may sound like the most interesting item on the menu, I would avoid it. 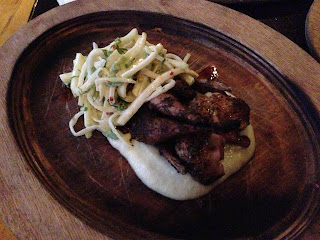 Another dish where the main star was one of the sides.  For the coffee dusted quail dish, which was prepared chargrilled, the sunchoke puree stole the show.  Such a random vegetable that I have never heard of was pureed and used as the base and sauce element of the dish.  My friend and I kept going back for more of this pureed mush, forgetting about the quail and definitely forgetting about the kohlrabi salad that accompanied the dish. It couldn't have been that great in comparison I guess. 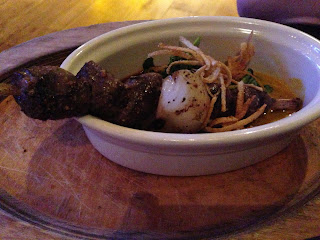 Seeing duck hearts on the menu, I was interested in how they would be prepared.  Skewered was my last thought, but there they were, four or five hearts on a long wooden skewer.  They were served with aji panda & amarillo sauce  which is like a spiced, deep flavored pepper and also frittes.  A pearl onion completed the skewer.  Thankfully in this dish, the hearts were the star.  In fact, they were the only good part about the dish.  Each heart was intact, tender, and packed with that unique organ flavor.  THe simple preparation did this dish justice!  Unfortunately, the frittes were oily and reminded of wonton strips.  The sauce was nearly non-existent. 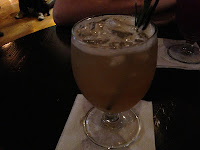 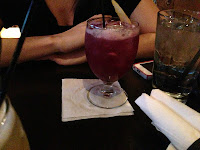 Once again, I think I will just stay away from explaining cocktails.  I still don't understand everything I try, but I do know that I enjoy the whiskey based drinks.  Check em out and let me know what you think!

The DOs/DON'Ts:
DO:
- I received the Drink Deck, which is a deck of cards with discounts to 52 bars/restaurants in the city.  Looking through it, I found Frontier to offer a 20% discount.  I believe these decks typically cost around $20 or $30, but it is well worth it if you are planning on coming to Frontier.
- Do share plates.  They are a little on the smaller side, so ordering a bunch is a must.
- Oysters are awesome.  The char-grilled are definitely worthy of ordering extra.

DON'T:
- Parking is surprisingly tough.  They do offer a $12 valet, which is pricey for not being in the heart of downtown.
- Gator ribs... sounds interesting, but taste is not very pleasant.