A Quick Word:
Carson's is one of the long standing BBQ establishment located in downtown Chicago.  They offer slow cooked meats (some over 24 hours) as well as all the fixings that everyone associated with a typical southern BBQ meal.  Unfortunately, the prices of Carson's are directly impacted by its location. High prices accompany mediocre BBQ in my opinion.  I find it kind of hard to enjoy BBQ when the sides and appetizers are the most memorable parts of the meal.  The atmosphere is very bar-like as opposed to some of the other BBQ places that remind you of being in the "country." And the service was just OK... with the waiter forgetting our table a few times.  For these reasons, and mainly for the subpar food, I decided to give Carson's just a 2.5 mile rating.  If you want BBQ, this is a place to try... but not until other options have been exhausted. 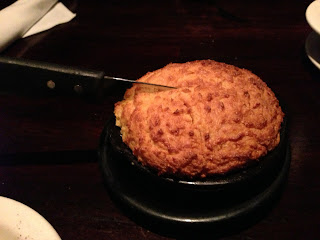 The corn bread is their "famous" appetizer according to their menu.  And I agree with them completely.  Served in a cast iron skillet, the corned bread comes out piping hot and with a generous side of butter.  After cutting into the bread, I realized that there were whole corn kernels.  There was a slight sweetness to the bread and an awesome texture.  The outside was crunchy and the middle extremely soft.  Add a little (or in my case, a lot) of butter to the corn bread and enjoy. 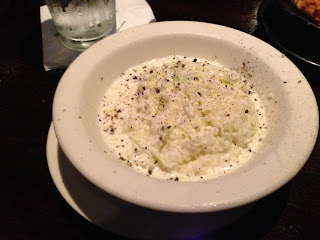 The coleslaw was the other dish we had that night that I really enjoyed and would want to come back for.  The slaw is simple... a light mayonnaise base appears to be water down maybe will a little bit of vinegar.  I believe they add a little sugar for sweetness and then the cabbage.  After arriving at the table, the waiter will add freshly ground pepper at your preference.  I suggest adding extra pepper because the sauciness of the slaw drowns out most of it.  I love the contrasting peppery and sweet aspects of this slaw. 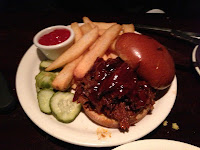 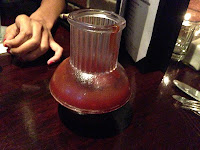 The sandwich we chose to eat was the beef brisket.  The claim to smoke the meats at low temperatures for over 24 hours.  There was a strong smokey flavor to the meat, but it was a little too fatty for my liking.  I smoke meat myself, and tend to find cuts that are a little more lean.  Adding their BBQ sauce didn't really help out the cause either.  It was a good attempt, but the sauce was too vinegar based.  And the bun was subpar for such a messy sandwich.  The fries it came with were good though.  Perfectly crisp on the outside with a strong potato flavor still present due to the nice thick cuts they offered.  It is reasonably priced which was a huge plus but once again the side dish appeared to outshine the BBQ. 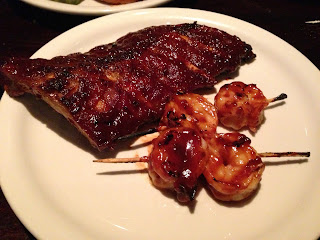 It took a while to decide on which combination to order, but we finally choose the ribs and shrimp.  It came with a half slab of ribs and a skewer of four BBQ shrimp.  I did enjoy the ribs from this platter.  The half slab is six ribs that have been smoked for hours and then smothered in their BBQ sauce.  The ribs are not "fall off the bone" which I enjoyed because I like ribs with more chew to them.  Unfortunately, I didn't enjoy the shrimp too much.  They were chargrilled so basically no smoke at all and just an overwhelming char flavor took over my palate.  Adding even their BBQ was not a good option.  I would not get the shrimp ever again and the ribs may also be a one time event.  The combination entree does come with choice of potato which is described below. 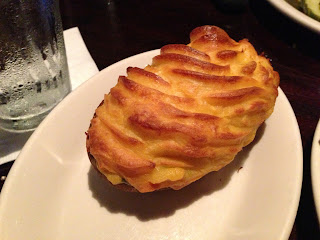 The double baked potato at Carson's was just ok... shouldn't really be called ultimate in my books though.  It was baked, mashed, mixed with cheese, sour cream, and maybe some seasonings and then placed back into the skin and baked again.  I was hoping for more like a loaded baked potato when the word ultimate was in the description.  Anyway, it is definitely something to try, but I would prefer the fries over this option any day.

The DOs/DON'Ts:
DO:
- Definitely order the corn bread and some of the other appetizers.  The flavors are significantly better than any of the BBQ.
- Stalk Groupon... I have seen this restaurant on their website several times.
- Valet parking, $13

DON'T:
- If you are craving authentic BBQ, I would head to one of Chicago's other establishments.  The sauce here is, simply put, just not that good.