A Quick Word:
Ghareeb Nawaz Express is the sister restaurant of the well-established Ghareeb Nawaz located in Chicago's Devon Avenue.  The new location recently opened near UIC which is a huge addition for all the students' late night cravings.  Ghareeb offers huge portions for low prices.  Some people refer to it as the "Jim's of Indian Food," meaning it is a popular fast food joint that offers memorable cuisine for the lowest prices possible.  From butter chicken to huge portions of biryani, Ghareeb doesn't disappoint for the cost.  However, the express location is limited in terms of sides and entrees.  Lacking fresh naan is a huge downfall and also really expensive samosas that appear to be from the freezer just disappoints. And wait??? No paneer dishes??  Because of these big misses, I could only give Ghareeb a 3 mile rating.  They have some easy fixes that would change my rating for the better. 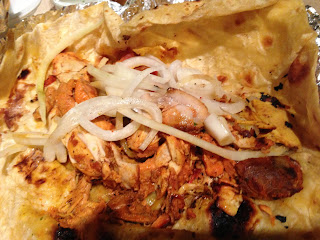 This was without question my favorite dish of the night.  I am still unsure what Chicken Boti is, but it had a nice curry spice and was more like a tandori chicken rather than a curry.  For only $2.99, you get a smaller portion of the chicken boti that is topped with raw red onions and then served with a huge paratha.  I suggest ordering biryani and adding it to the paratha along with some raita.  Roll it up into a "bombayritto" and enjoy.  This is another filling creation and one I highly suggest making! 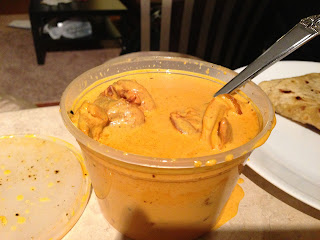 A typical order of butter chicken is what we experienced at Ghareeb.  It was a lot more sauce than chicken and some of the pieces of chicken seemed to be thrown into the sauce rather than cooked with the sauce.  Regardless, it had a nice spice to it and was even better the day after.  I added some of the butter chicken sauce to the burrito I made and that was amazing.  I believe this only costs $4 or $5 which is a steal for butter chicken. 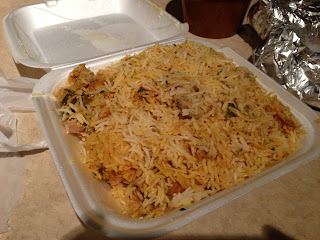 The chicken biryani from Ghareeb is one of the largest take out portions of rice I have ever seen.  They fill an entire "to-go" container to the brim.  The rice was well seasoned and wasn't dry at all.  It had tons of chicken and is definitely a meal of its own.  Unfortunately, I was cheap that day and didn't spend the extra $1 for boneless chicken.  I suggest paying the extra buck because there are so many small pieces of bone in the rice that it gets frustrating after a while.  I will definitely be ordering this again--just without bones. 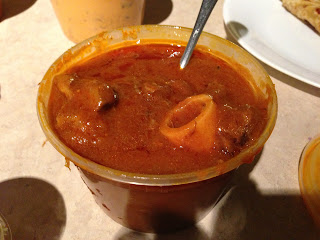 I was pretty disappointed with the lamb khorma entree I ordered.  The lamb was extremely fatty and any sort of meat was also more cartilaginous than anything.  There was a strong game flavor that was actually overpowering as if the meat was old.  The sauce was just as bad, with the strong game flavor being the overwhelming flavor that filled my mouth.  I thought eating rice would help dull the sharpness of that meat, but it didn't help. Do not order this dish. 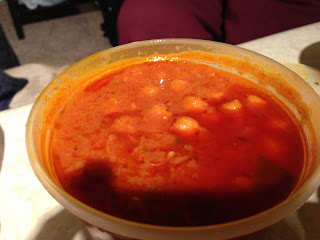 My friends and I are addicted to their channa masala.  It just seems to be healthier than some of the more creamier versions I have had at other Indian restaurants.  This time unfortunately was little more oily than we were wanting (but just pour some of it off like we did).  The chick peas were a great consistency--soft, yet firm enough to make the meal substantial.  It wasn't spicy at all which was disappointing.  It varies every time we go, but is still worth the gamble.  A great vegetarian dish. 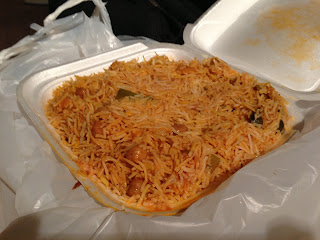 My roommate also ordered a biryani... but this was the vegetarian option.  Rather than pieces of chicken, it was mixed with a bunch of curry flavored chick peas.  It had similar seasonings to the chicken biryani but lacked the annoyance of bones.  This dish only costs $3 and is a steal for the size of the dish.  I swear it will feed 2 or 3 people for at least two meals. 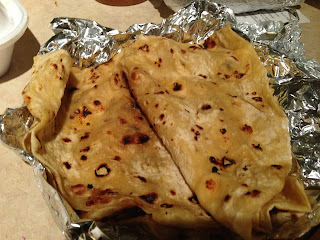 Huge parathas for $0.75.  I suggest ordering a couple extra for left overs.  Unfortunately no naan and when they do, I think it is just store bought naan that is warmed on the stove.  Get the parathas.

The DOs/DON'Ts:
DO:
- Definitely come for late night food.  They are open till midnight or later on most days and offer their entire menu (except samosas if they ran out).
- There isn't much seating (since it is a small part of the adjoining book store), so I suggest ordering ahead of time and just carry out the food.  It is just as good and they definitely do not skimp on portions.
- Do stick with the classics and the parathas if you don't want to be disappointed.

DON'T:
- Surprisingly, parking is difficult around here.  So just be aware.