A Quick Word:
One of the newest and most talked about restaurants in Chicago is Embeya.  They focus on Asian cuisine but with a French style of cooking.  So here, you will not find the typical oily meats covered in sauces and salty fried rices.  But rather you will encounter dishes with complex flavors but still keep that Asian feel.  I thought the best part about Embeya was their offering during restaurant week.  Rather than making guests choose, the restaurant gave smaller portions of each item on the restaurant week menu.  Everything here can be served family style which in my opinion is the best way to attack their menu.  Order a lot and share it all!  The atmosphere is incredible... experienced wait staff and beautiful decor.  Some pricing was a little off (rice dishes), but overall the price and quality was exceptional.  If it wasn't for the couple misses in the food, I would have given a better rating, but for now... 4 miles is perfect for them. 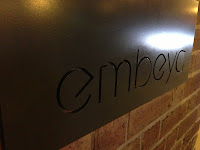 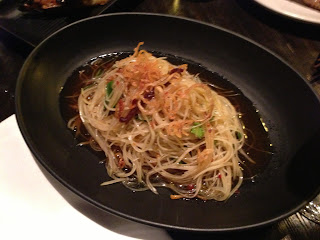 This was a great dish to start of the meal.  The green papaya salad is thinly sliced papaya that seemed to be pickled.  It reminded me of achara which is a Filipino pickled papaya salad.  The gourmet version served at Embeya is topped with cilantro, crispy shallots, and beef jerky.  I am unsure about the jerky because I personally didn't get any, but the shallots added even more texture to the already crispy and vinegary papaya.  I think everyone should try this appetizer because it is one that will not be offered at any other restaurants in the city. 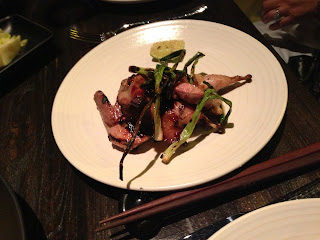 I absolutely love eating quail.  The meat is much sweeter than chicken.  In this case, it was marinated in honey and lime and then lightly grilled.  The grilled scallions that accompanied the meal was another nice touch, adding that char and onion flavor.  This dish reminded me exactly of a dish from Aristocrat Chicken in the Philippines... just a much smaller portion and more "high class." 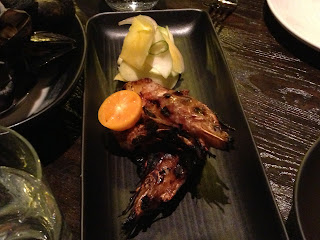 The Head-on Prawns was one of the hot appetizers we decided to order.  It came with two decent sized prawns that were char-grilled.  They were served with a green mango garnish and calamansi which is a very strong citrus fruit.  Because of the small appetizer, this is difficult to share.  The head of the prawn was my favorite part with the charred shell giving a lot of smokey flavor and the juices of the shrimp all collecting in the head.  It wasn't fishy at all so even non-seafood eaters would enjoy this.  Squeeze just a little bit of calamansi on top and I suggest eating a little mango with it as well.  Great balance with smokey, citrus, and sweet flavors. 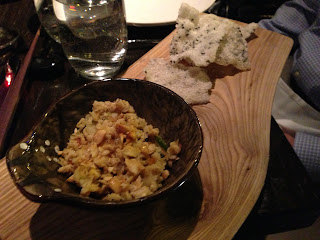 In my opinion, this was the best appetizer we had.  As a thank you for coming to Embeya during Restaurant week, the chef prepared this baby clam appetizer.  It was an interesting concept with a baby clam and peanut mixture with what I thought was fish sauce.  It was served with a shrimp or fish cracker.  I am unsure if it was supposed to be an asian nacho or bruschetta or what, but I do know it was incredible.  The peanuts was key, adding a salty, earthy flavor to the seafood.  Just wished it came with extra crackers.  Even though it didn't, that didn't stop us from using our spoons to finish off that clam mixture. 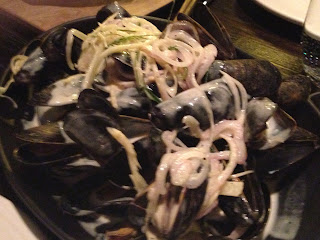 Mussels are my dad's favorite appetizers.  Here, they were cooked in a coconut-wine sauce and topped with lime leaves.  It was a huge shareable appetizer with even more sauce leftover that went to waste.  We wanted some kind of bread or rice to eat the sauce with but the rest of the meal came much later. Overall, the dish was strong coconut flavored, but the sweetness was mellowed by the sliced red onions that covered the top.  I suggest ordering rice with the appetizers... or have them bring mussels later on in the meal. 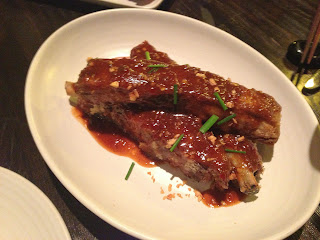 The first part of the restaurant week entree was the Embeya's popular rib dish.  Coated in what I like to call an asian BBQ sauce, the ribs were just tender enough, but at the same time had the chew that I really enjoy in BBQ.  The sauce was made of tamarind, toasted garlic, and hoisin sauce.  There was a dominating asian flavor that was tasty when mixed with the rice.  A little cartilaginous on some ribs, but overall tons of meat. This was my older brother's favorite dish. 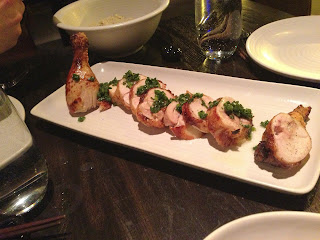 This was the first of the restaurant week entrees that arrived at the table.  The garlic chicken is simply topped with scallions.  I was pleasantly surprised with how much garlic actually came through.  In some pieces it was a little too much, so eating extra rice definitely helped.  A great dish for sharing. 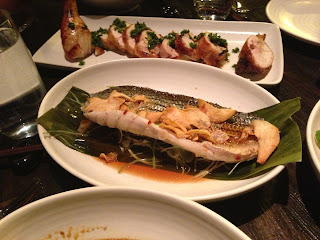 When seeing the menu item called Suzuki on the menu, I knew it was something I would probably be ordering.  After finding out it was sea bass, I was definitely hooked.  The sea bass was prepared by first being filleted (NO BONES!), wrapped in a banana leaf, and steamed.  After steaming, it was topped with a ginger soy sauce, sliced ginger, and fried garlic chips.  This was my favorite entree of the night and the one dish that stole the show.  The fish was extremely tender and just broke apart without any effort.  The ginger was prominent and the slices of both garlic and ginger gave bursts of flavor to the fish.  The presentation was beautiful and fun at the same time.  Highly recommend this dish. 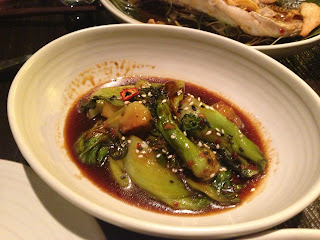 When seeing bok choy on the menu, I was confused on what the dish would be and if I would like it or not.  I am used to eating boiled bok choy or having it in my soup.  Anyway, this bok choy was stir fried with candied jalapeños and topped with sesame seeds.  And it was awesome.  The bok choy was crisp and well seasoned.  I couldn't really taste any heat from the peppers but the sauce was very salty which I enjoyed.  Once again, add it to the rice! 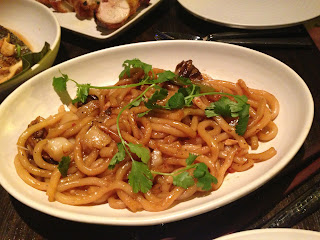 These house made noodles was another highlight of the meal.  It was a little on the simple/conservative side with the dish containing a few bay scallops, chinese celery, and maitake mushroom.  I personally didn't get to try the scallops or mushroom, but the noodles consistency was the best.  Reminded me of an asian gnocchi just in noodle form. 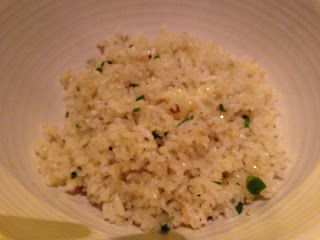 Probably the main disappointment of the meal.  The fried rice was nothing more, but I guess nothing short of its name.  Their white rice was lightly stir fried with soy sauce, garlic, and scallions.  It wasn't anything special and honestly with such great food, it was more of a disappointment.  We also ended up ordering another bowl of white rice ($4?!?!).  Insanely priced for essentially a filler. 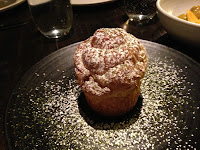 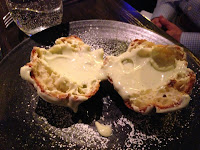 During our meal, we snuck away to tell our waiter about my mom's birthday.  By doing so, the creme puff  came out with a candle.  My mom cut open the puff and it was filled with a green tea-vanilla creme that was an interesting consistency.  It was almost like a melted ice cream, just not as cold.  It is just sweet enough for people to associate the puff as a dessert, but not too much for people without a sweet tooth.  Definitely the better of the two desserts. 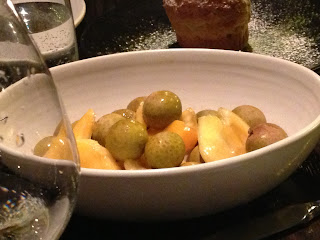 The second restaurant week menu dessert was simply exotic fruit.  I guess it is not very exotic when you are exposed to these fruits in Chicago's Chinatown frequently.  The bowl came with longans and jackfruit (but was missing the rambutan).  Fruit is fruit... most people think jackfruit is an acquired taste, so maybe it is too pungent for some.  Anyway give it a try. 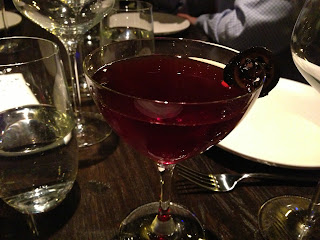 The smoke and barrel drink was made with scotch, 10 year tawny port, vermouth, and a candied walnut as garnish.  The port was much sweeter than expected and the scotch flavoring definitely gave that smokey wood barrel flavor that I was looking for.  Overall, the drink was still too sweet to appreciate entirely, but a great way to start off the meal.

The DOs/DON'Ts:
DO:
- Definitely take advantage of their prix fix meals if offered.  The restaurant week menu was incredible, allowing guests to try everything rather than choose one entree over the other.
- SHARE!  sharing is the best at Embeya and being served family style is part of their restaurant's concept.
- Valet parking for $12 (dinner time).

DON'T:
- Fresh fruit dessert is disappointing.  I wouldn't pay for that dessert ever again.