A Quick Word:
Whenever I hear the word deli or corned beef in Chicago, the first place that comes to mind is Manny's.  I understand that Chicago deli's can't compare to New York's, but Manny's does an amazing job and has done so for decades.  Located near Maxwell Street Market (near Roosevelt Rd.), this restaurant has been providing Chicagoans with sandwiches piled high with their signature corned beef and pastrami.  The atmosphere is very relaxed with a cafeteria style arrangement. Customers walk to counters and stare at all the amazing home-cooked style meals that can be ordered.  Just point and the dish will be quickly prepared before being handed to you.  However, despite having some of the best deli sandwiches in the city, the side dishes were not only expensive, but subpar in taste and temperature.  And for that reason, I couldn't give it a perfect rating... but 4.5 miles is still incredible! 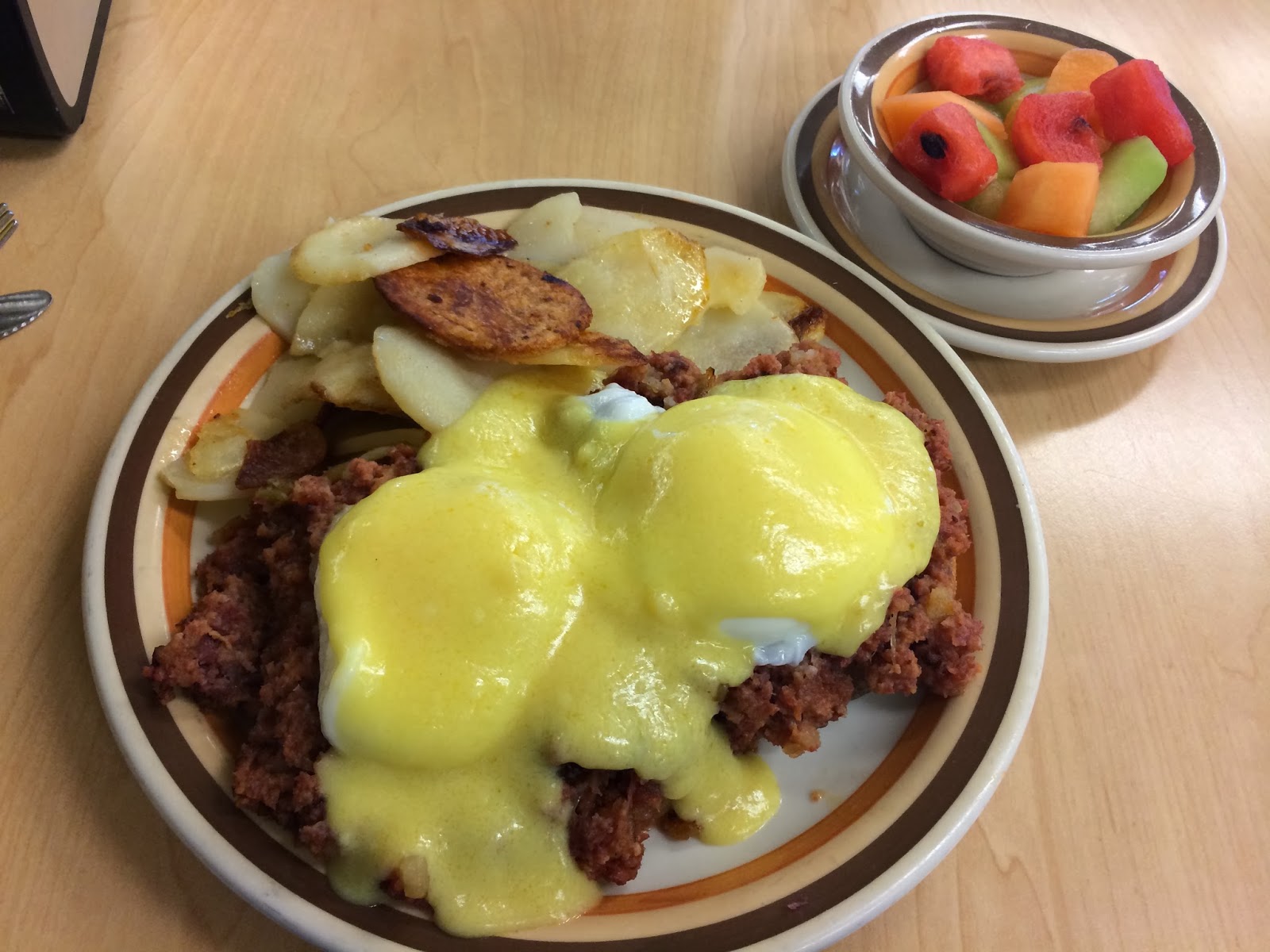 It had been a while since I dined at Manny's, so I randomly decided to give their breakfast a try.  I usually crave their corned beef, so when I saw the corned beef hash eggs benedict, I was sold.  This dish had a base of a buttered english muffin cut in half and toasted.  It was then generously topped with their house-made corned beef hash, followed by two poached eggs.  Hollandaise sauce was poured on top and it came with a side of house potatoes and bowl of fruit.  Once again, Manny's found a winner.  The corned beef hash was so much better than most breakfast joints, probably because they use the same corned beef that they pile high on rye bread for their sandwiches.  It is super tender, has great chunks of meat and potatoes, and the flavor was spot on.  The english muffins were held up nicely, but one suggestion could be to try biscuits.  Make sure to pop the yolk of the poached eggs and mix it into the meat.  It makes everything rich.  You will not be disappointed with this meal, even when the checks, you will find only a $9.00 charge! 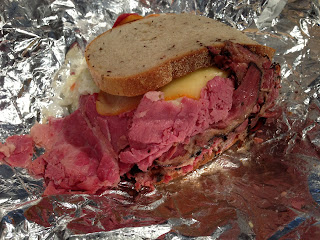 After coming here quite a few times, I decided to try one of their signature sandwiches rather than the single meat sandwiches everyone orders. The Chazzer combines Manny's two specialties... the corned beef and the pastrami.  Each is piled at least two inches high in between two slices of rye bread.  On top of all the meat is an ice cream scoop full of coleslaw and a slice of munster cheese.  You have the option of 1000 island dressing which in my opinion is not needed.  The corned beef and pastrami are both extremely moist and seasoned to perfection.  There is just enough fat left on the meat to give that extra flavor.  Pepper is the main spice that fills your mouth and it goes well with the sweet mayonnaise based slaw.  I couldn't taste the munster cheese, so I don't think it is necessary.  I suggest getting this sandwich because you get the freshness from the slaw and the best of both worlds... both meats! 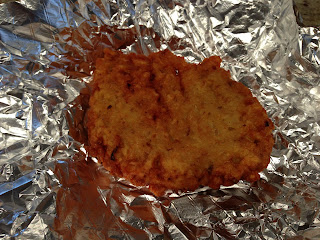 Manny's potato pancakes or latkes are just as famous as their corned beef and pastrami.  These jewish influenced side dish is made simply with potato and a little onion and is bound together with an egg mixture.  They are formed into a 3- to 4-inch pancake that are nearly 1/2 an inch thick and then fried.  The pancake is crispy on the outside, soft in the middle, and has an onion flavor that seems to linger.  I was a little disappointed because every time I get one, it seems to be room temperature as opposed to being made fresh.  If you order a sandwich, it only costs $1.00 extra to get a potato pancake, so it is an awesome deal, just know that it may not be as hot as you want. 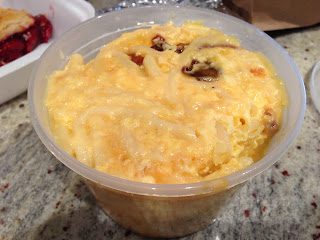 After trying the noodle kugel on my last visit to Manny's, I knew what not to get.  So this time, I chose their baked macaroni and cheese.  It is very different, mainly because of the long thin style noodle they use.  It reminded me of the consistency of spaghetti noodles, but is hollow in the center, similar to the classic macaroni.  I am unsure exactly what cheeses they use, but it seemed like a mild cheddar and some kind of creamier cheddar cheese.  They don't use any breadcrumbs, but instead have a thick layer of burnt cheese the tops the dish.  I enjoyed the creaminess and simplicity of the mac and cheese.  I think many restaurants spend too much time making insane creations that take away the classiness of mac and cheese.  But at nearly $6 for a side, it is a quite expensive way to relive your childhood. 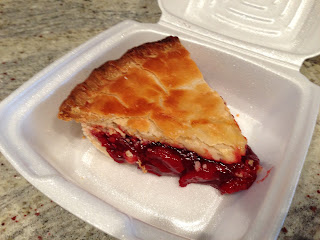 To complete the "President Obama Lunch," you have to grab a piece of Manny's cherry pie.  The pie is generously filled with a gelatinous cherry filling similar to the one you find in the can, but with more cherries.  The filling is overly sweet, but is toned down by the sugar lacking and dry crust.  The crust is awful by itself, but somehow together with the filling makes for an addicting pie that I order everytime I come.  Give it a try... it isn't like a Hoosier Mama Pie Company pie, but it does remind you of your school's cafeteria.

The DOs/DON'Ts:
DO:
- This place is cafeteria style so... Just walk up to the counter, DO grab a tray (you will need it), tell one of the guys behind the counter what you want and continue to move down the line.  Grab your own dessert or drink at the end of the line and then approach the lady with a register.  Here you will just get a ticket of what you ordered and if you want it "to go", then someone will take your tray and wrap it up.  Otherwise enjoy your meal and bring your ticket to the cash register near the doors after eating and pay.
- Do try the sandwiches.  I know they offer a lot of other home-cooked meals, but the corned beef and pastrami are what they are famous for.
- Free Valet Parking!

DON'T:
- Noodle Kugel was featured on "The Best of..." on food network.  Don't order it.  It is not good and tends to be dry.
- Don't order too much food here.  The portions are much bigger than expected.