A Quick Word:
Not many places in Chicago pride themselves in serving New York City style pizza.  It wasn't a surprise that the one place to do it was the same guys behind New York Bagel Co.  When I first noticed the pizza place in Ogilvie Train Station, I was curious how the city would react.  With signage that magnified SLICES rather than NYC, you could tell the owners were also hesitant.  And with some website online showing the place as CLOSED, I was simply just confused.  However, my friends and I were still able to grab a few slices at the still open restaurant.  We had a groupon, which definitely helped out; but at about $5.00 a slice, it doesn't brake the bank.  The pizza itself is hit or miss.  Some of it is fresh which makes it much better, while others have been sitting around, making the pizza crust tough.  They appear to have great toppings, but later in the afternoon, they stop making fresh pizzas, meaning you have to choose from whatever is left over.  I was pretty disappointed with the lack of options despite their extensive menu.  For those reasons, this pizza joint barely made average in my books.  3-mile rating is what I gave it. 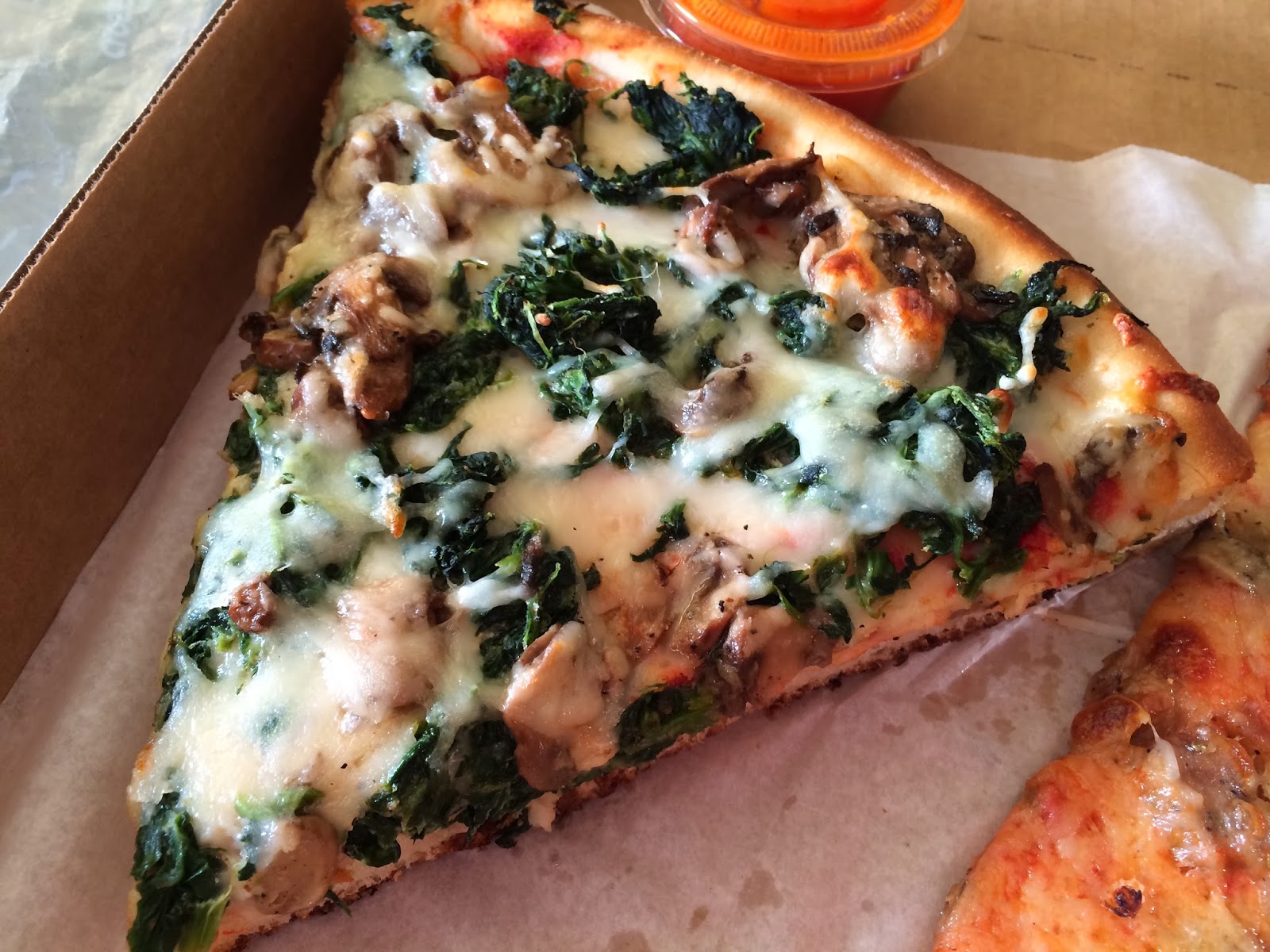 I strayed away from the typical thin crust NYC style pizza with this slice.  The veggie supreme was their pan pizza version.  This one was topped with spinach, artichoke, mushrooms, sausage, and mozzarella cheese.  The crust was thicker and very moist and crispy.  It sort of reminded me of Pizza Hut.  It is on the drier side in terms of sauce; luckily, the cashier gave me a side of marinara for it.  Add plenty of red hot pepper flakes and dip into the sauce and you will find a descent slice of pizza. 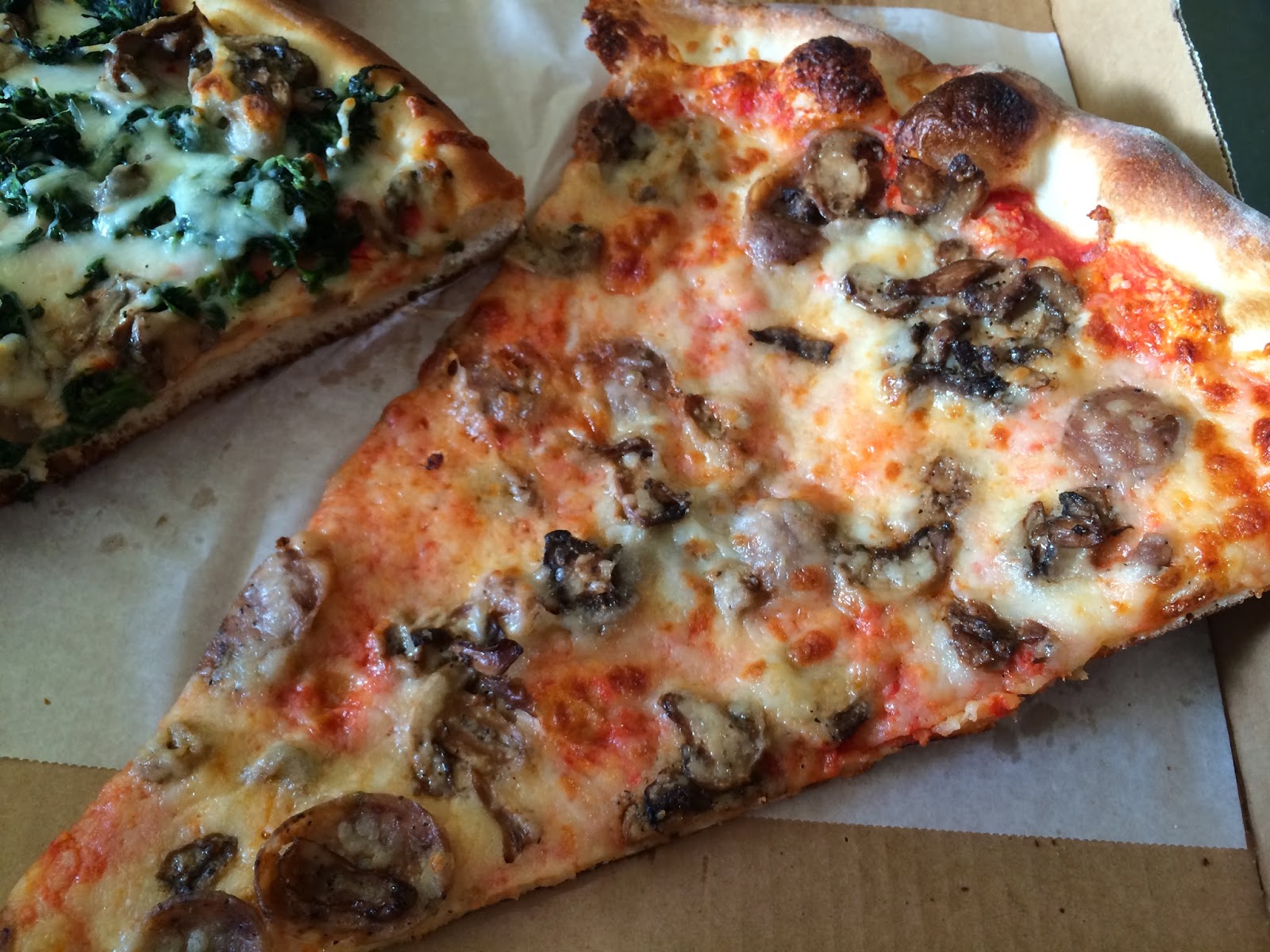 For the other slice, they unfortunately had a limited selection with none of their specialty slices.  So I stuck with sausage and mushroom.  I was pleasantly surprised to find a nice spicy sausage and mushrooms on each bite.  The crust was the thin version, making it crispy under the pizza, but almost inedible on the crust.  The crust was dry, and flavorless and like I said, inedible towards the end.  The slice is huge; honestly, larger than my head.  It is filling, but I think 1.5 slices is the best amount of food.  With a Groupon, it is worth the price... without, I would definitely think twice. 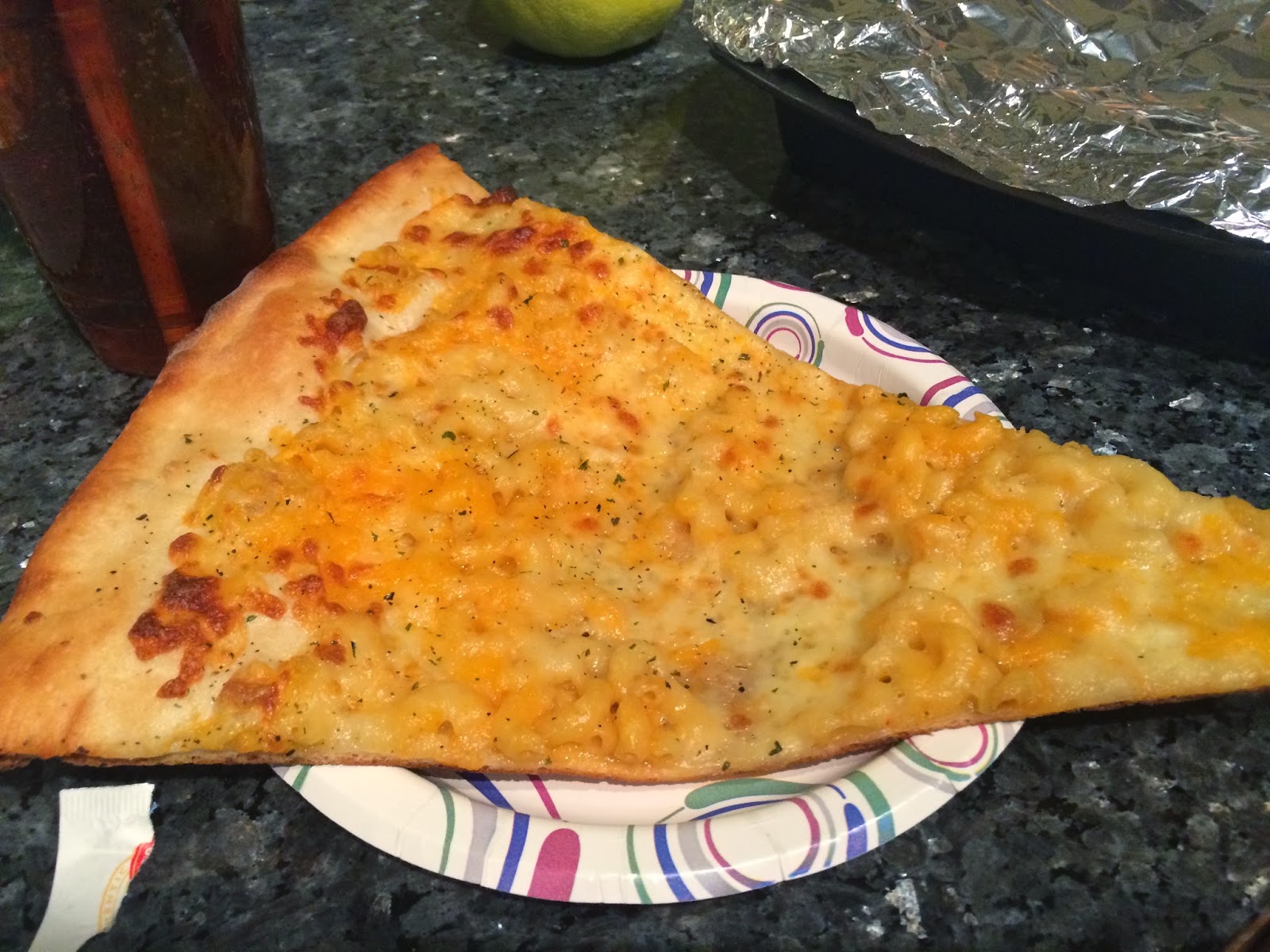 With a limited option of vegetarian slices at night, my roommate decided to stay away from the classic cheese and order a slice of their Mac 'n Cheese pizza.  The name of the pizza is self explanatory.  They have baked mac 'n cheese sitting on top of their typical thin NY style pizza crust.  There is no pizza sauce.  Overall, the flavor was good.  It actually reminded me of eating homemade mac 'n cheese.  I did think it was a little on the dry side.  The lack of pizza sauce made it essentially a cheese block.  The pizza was warmed prior to heading home, unfortunately, the thin crust didn't hold the heat well.  The size of the pizza was huge.  Two slices per pizza box is not bad for the price... but the groupon helps even more. 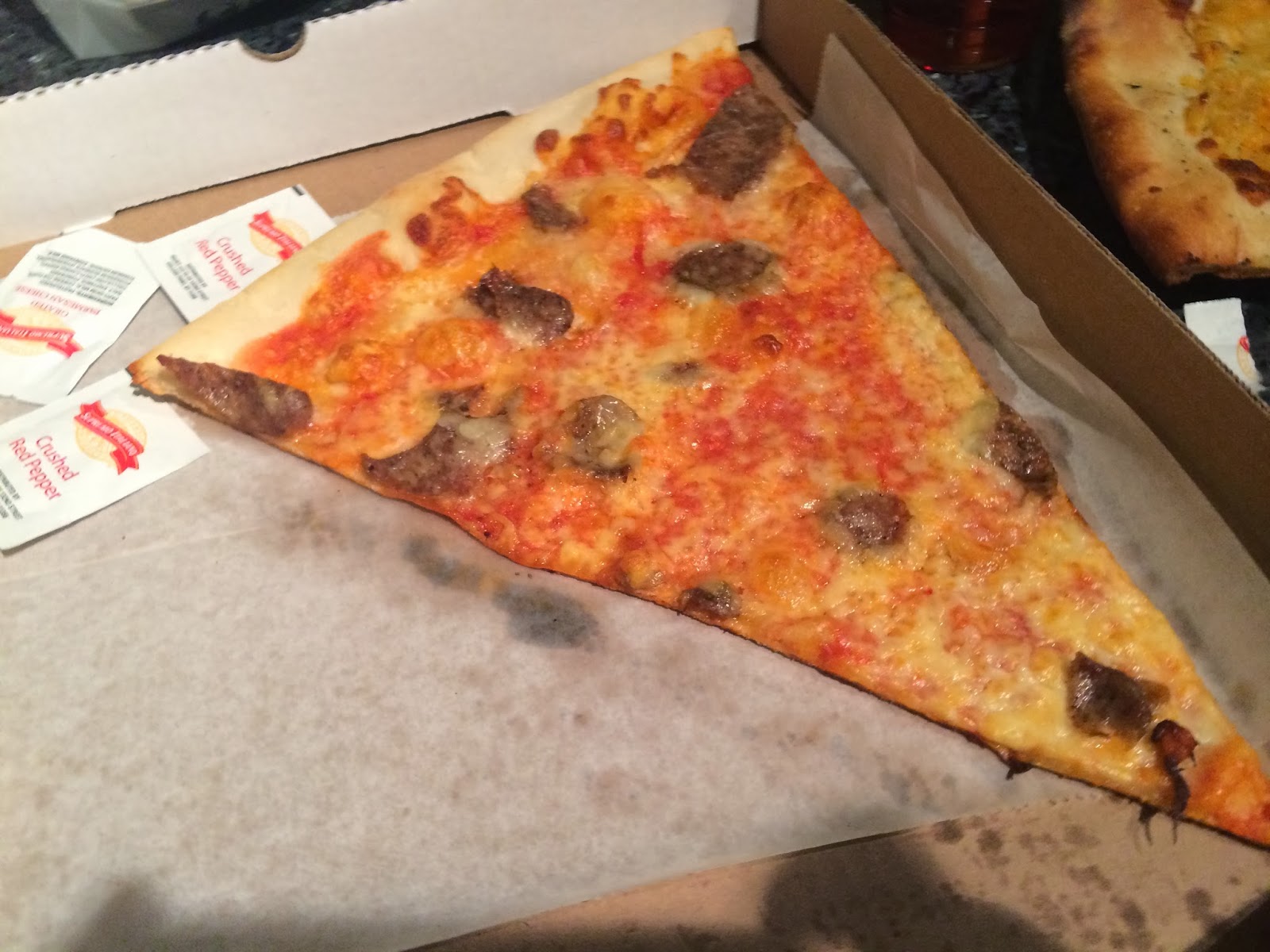 The other slice of pizza was the NYC sausage.  Still on that extremely thin crust, italian sausage slices topped the classic tomato sauce and mozzarella cheese.  This one was more fresh, signified by a much softer and more addicting crust.  The sausage had a little spice to it, but not enough to persuade one to not use plenty of crushed red pepper.  It was also fresh enough to still bend in half like New Yorkers do.  It was once again a large slice, but still not as satisfying as Chicago's deep dish slice.

The DOs/DON'Ts:
DO:
- Check on Groupon for a deal.  We paid $7 for any two slices of pizza and two fountain drinks.  This is about a 40% discount or so.

DON'T:
- Don't come too late.  They stop making their speciality pizzas early in the day and only have a few of those unique slices at night.  Most of the night time slices are the classic cheese, sausage, or pepperoni.

Posted by Joseph Esparaz at 8:30 AM