A Quick Word:
Because we dined at La Madia a few times in the past couple of months, we continued to see Beatrix's popularity grow.  At first, it seemed like walk-ins could get a table, but now, reservations are highly recommended.  Eventually, we decided to find out what the huge hype of Beatrix was.  Being part of the Lettuce Entertain You group, we expected the quality of service to be great and the food to be above average.  And, we didn't leave disappointed.  Their concept seems to be home-cooked foods with a twist.  They offer a complex meatloaf, a classic pot roast, and even deviled eggs!  This sure reminds me of dishes I can make at home, but then I realize the speciality ingredients involved.  At Beatrix, we had a very attentive waiter that fixed a cold food problem without a hassle.  We had great food and drinks that missed on some parts, but were great in other aspects.  The location is wonderful, but the valet parking is expensive.  I know their restaurant is still very new so they are working out those kinks.  But with those kinks, I thought a 3.5-mile rating would be fair.  Plenty of room for improvement. 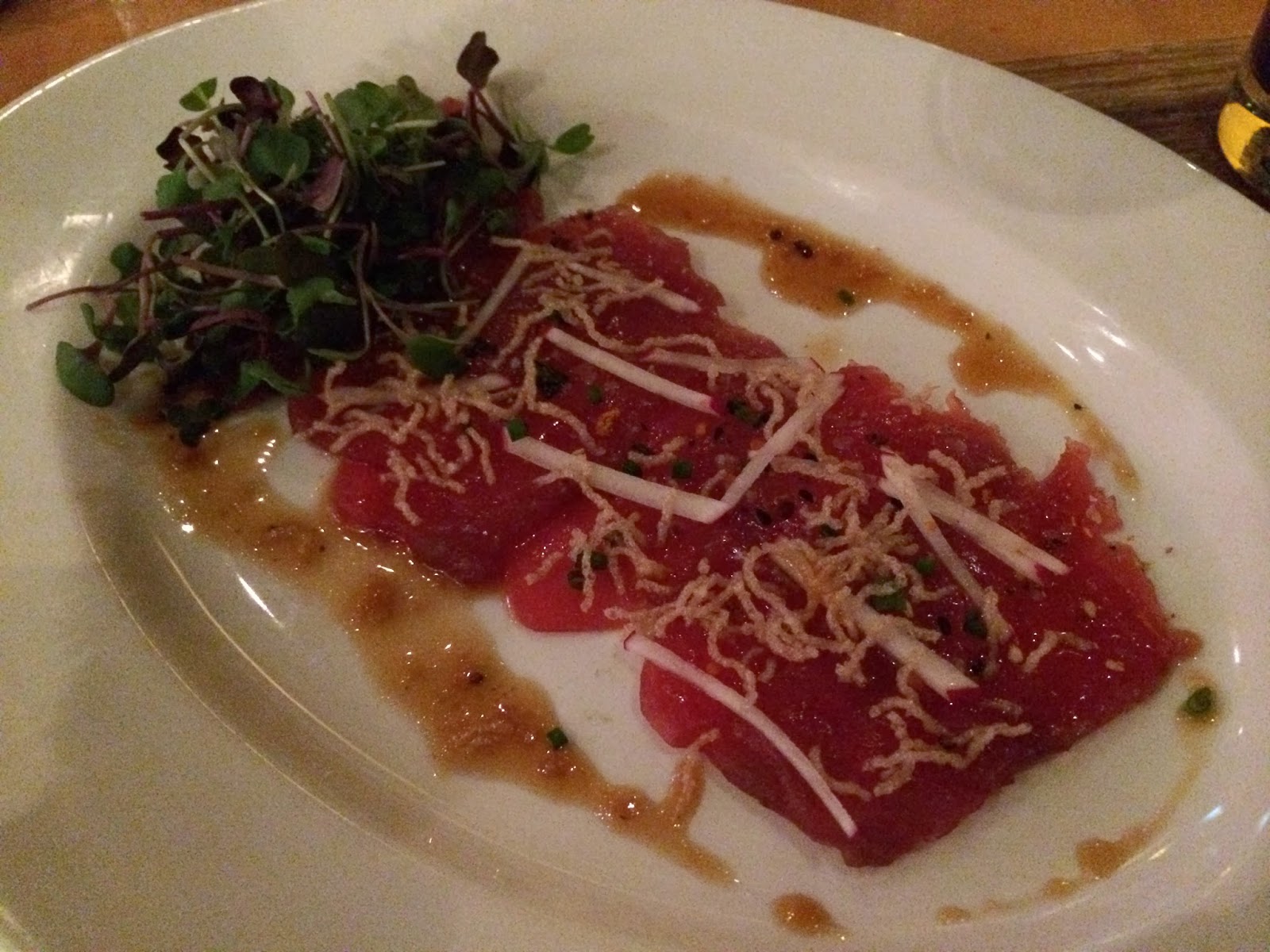 It was difficult for me to turn down deviled eggs, but in its place, we decided on the Ahi Crudo appetizer.  It is made with thinly sliced sushi-grade ahi tuna that is topped with a yuzo dressing, thin slices of apple, chili oil, and crispy brown rice noodles. A small micro-green salad acts as both a garnish and in my opinion a much needed pepperiness.  There was probably five or six slices of the tuna so the appetizer is small and barely large enough for two.  I suggest rolling the tuna with some of the salad and a little bit of all the other ingredients.  Together, the different flavors makes for a complex flavor scheme with contrasting textures with the smooth fish, yet crispy apple and noodles.  Delicious, but dainty! 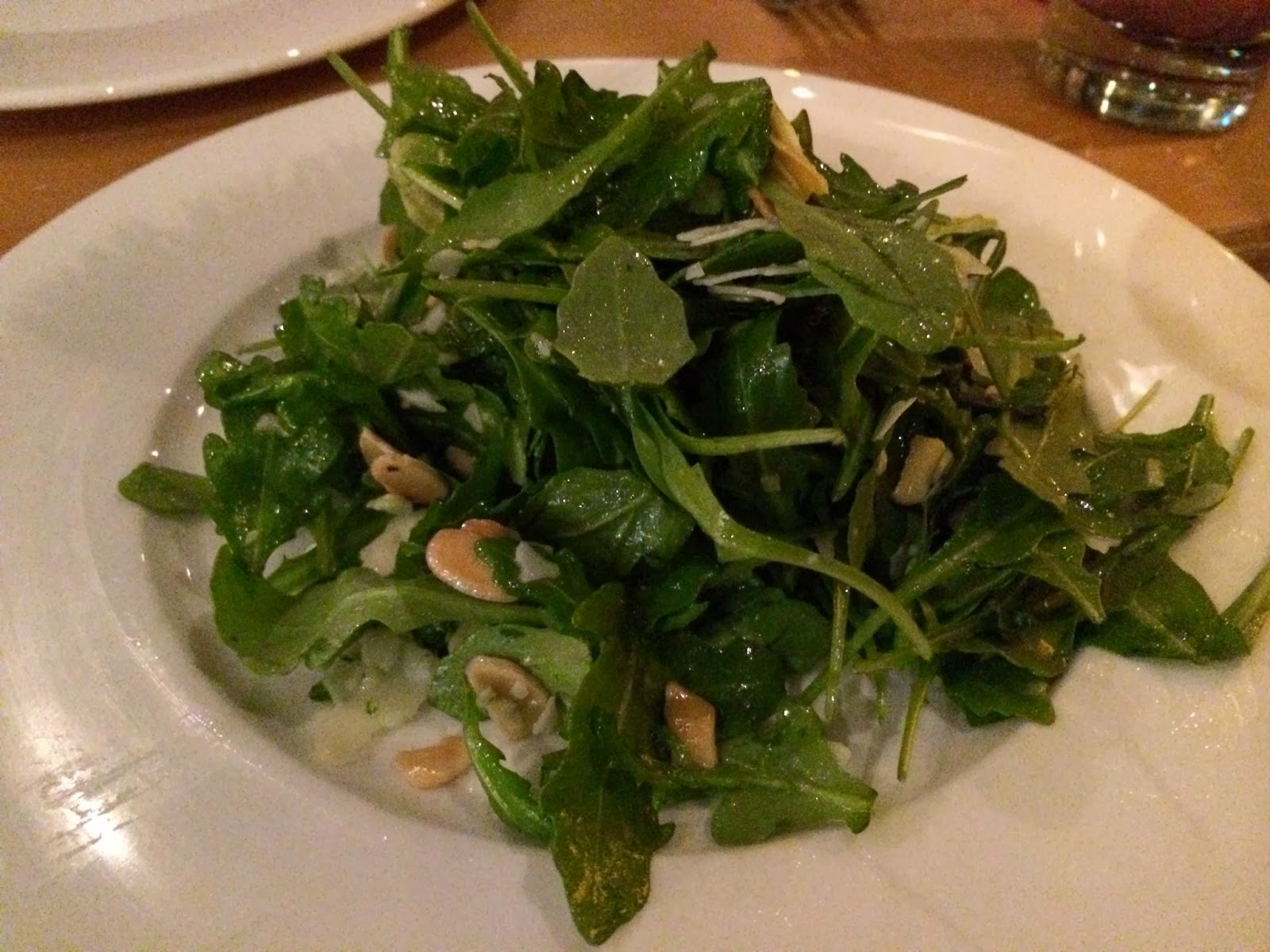 My girlfriend and I decided to split a salad and share an entree.  They describe their salads as "entree-sized," so we knew this would be plenty of food.  We chose the Straight "A" Salad, which was made with arugula, avocado, asian pear, asiago cheese, and almonds.  It was lightly dressed with a vinaigrette.  The above picture is just half of the salad because they went ahead and split it up for us.  All of the components worked well together, but I was disappointed in the amount of avocado and asian pear that was added to the salad.  I honestly had maybe one or two cubes of avocado and even less in slivers of asian pear.  I thought maybe the other half of the salad was luckier... but it wasn't.  They are definitely stingy on those toppings. 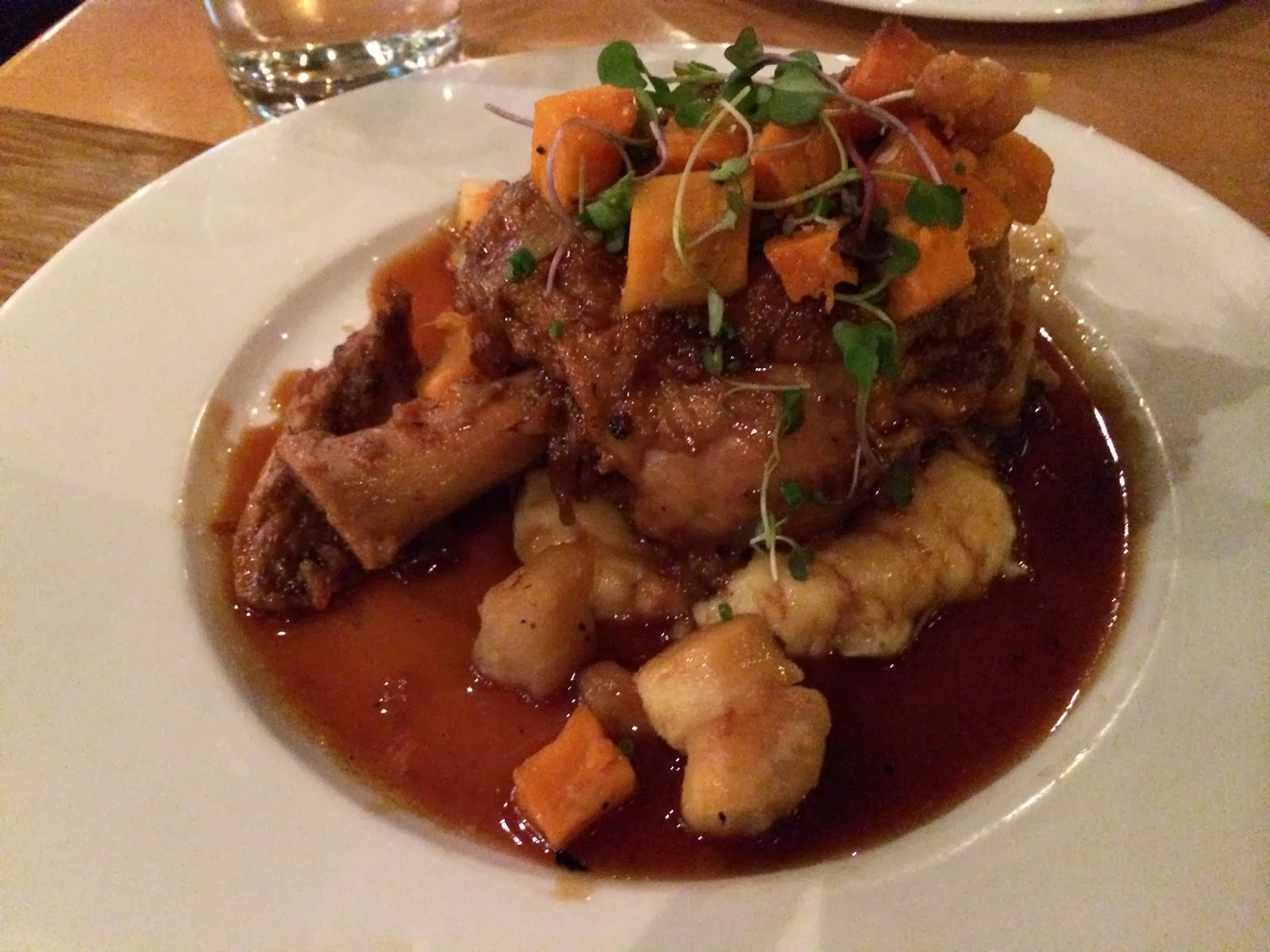 Before heading to the restaurant, I was curious why Beatrix became so popular so fast.  I checked out some reviews and pictures of the restaurant and this dish caught my eye.  The caramelized pork shank is a MUST HAVE dish.  A huge pork shank has been cooked until fall-off-the-bone tenderness.  It is topped with diced sweet potatoes, braeburn apples, and sits on a bed of mashed potatoes.  A cider reduction is then drizzled around the entire dish.  WOW!  The meat is incredible.  You can use your fork to easily pull apart the meat.  It has a sweeter flavor profile with both the cider reduction and the sweet potatoes.  I liked how it came with two starches, making the dish even easier to share.  Unfortunately, our meal came out cold... and I mean refrigerator cold.  This had me thinking how could it be that temperature.  After letting our waiter know, the meal was fixed and came out piping hot and delicious.  The manager stopped by our table to apologize, which was a huge plus.  Great service! 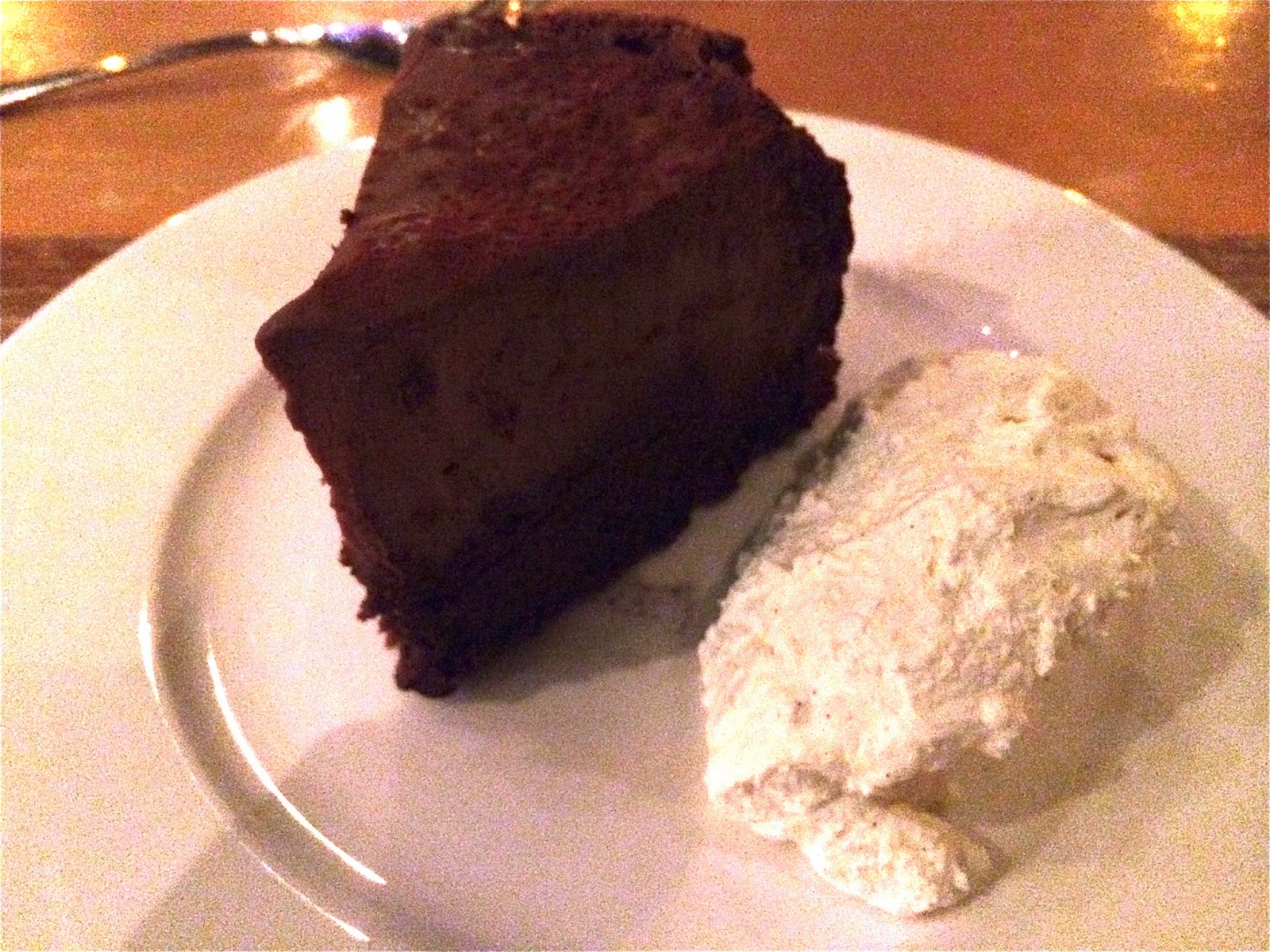 Our mistake of the night arrived after the meal was over.  This dessert was RICH, TASTY, and HUGE.  I say mistake because it put us over the top in terms of fullness.  The chocolate cake is minimal cake and a lot of fudge and mousse.  It is served with homemade whipped cream.  I thought the cake tasted more like dark chocolate than milk, making the sweetness not overwhelming.  The cake was dry, but that didn't matter when you add the mousse topping to it.  I would have been happy without the dessert, but if you want chocolate, give it a try. 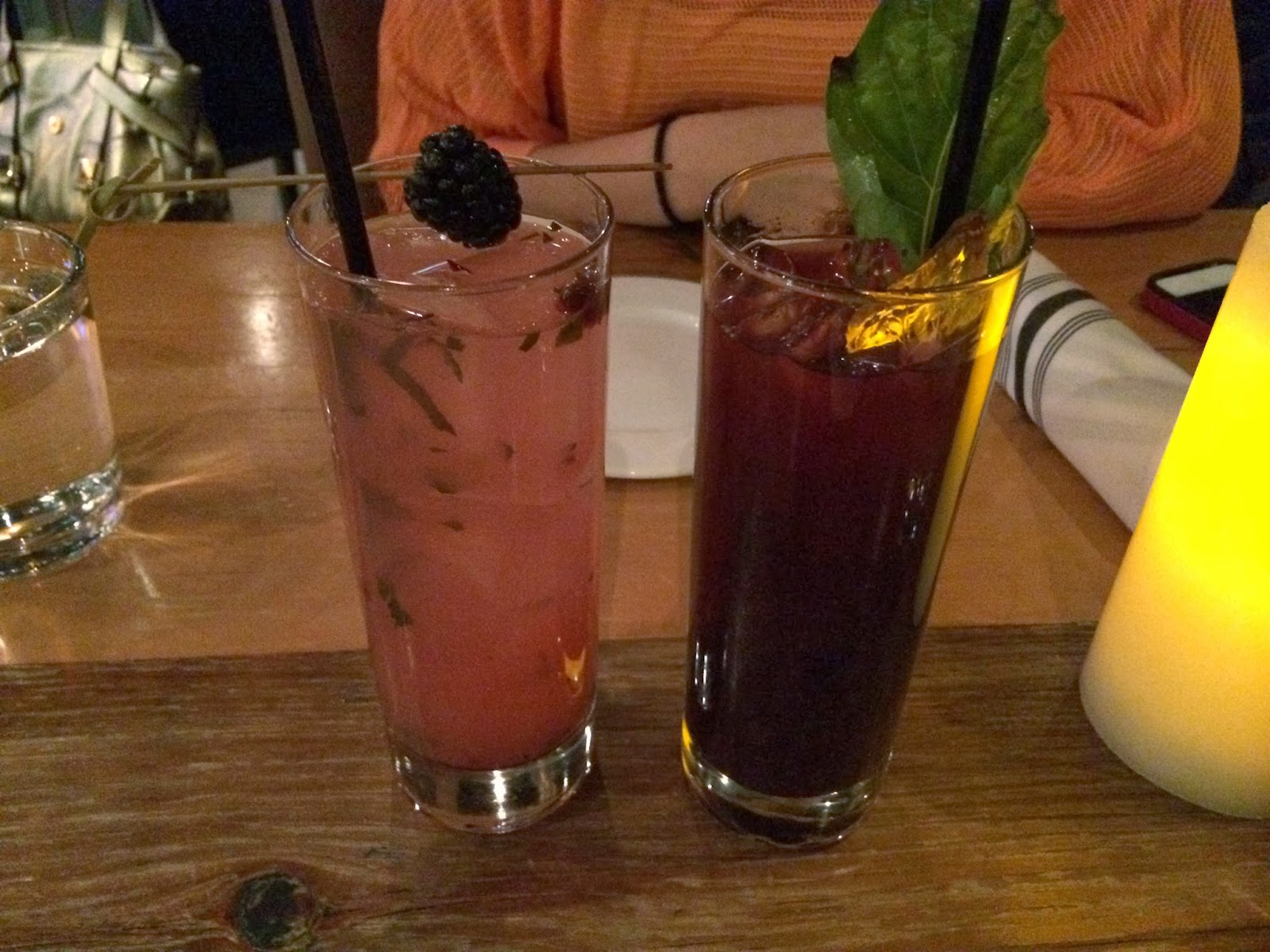 The waiter did a great job selling the idea of freshly squeezed juices that have the potential of being spiked.  My girlfriend chose the blackberry and lychee lemonade with an added shot or so of gin.  The drink was refreshing and reminded you of lemonade.  The lychee flavor was, however, absent.  My choice was the blueberry and basil smash which pairs well with rye whiskey.  Unfortunately, for me, the blueberry juice overwhelmed everything in the sense that you could not taste whiskey or even just basil.  Good idea, ok execution.

The DOs/DON'Ts:
DO:
- Valet Parking is $14.  I will let you decided if you should drive or not...  The valet parking is part of the hotel next door.  Just make sure to remind them you are dining.  A validation from the restaurant host stand is needed.

DON'T:
- Don't miss out on that Pork Shank.  It is worth sharing and definitely worth the higher prices.

Posted by Joseph Esparaz at 2:26 PM