A Quick Word:
I am a huge fan of pies--both sweet and savory.  I have seen Bridgeport Pasty's food truck around several times, but whenever I arrive, they were always sold out.  I thought to myself, this place must be good.  When I heard they had a store front near my apartment, I decided to give it a try.  The first word that comes to mind is... Disappointment.  Located just a block or so away from Pleasant House Bakery (one of the best, if not the best, savory pies in Chicago), I was hoping for something better.  But, all you get here is a handheld pot pie that is too expensive for my liking.  Yes, their flavors are decent, but still not memorable.  The chic-pot-pie may be the only one I would even suggest trying.  It can be cheap, if you just get one, but you won't be that full.  For an average pie, I decided on an average rating.  3-mile rating was given. 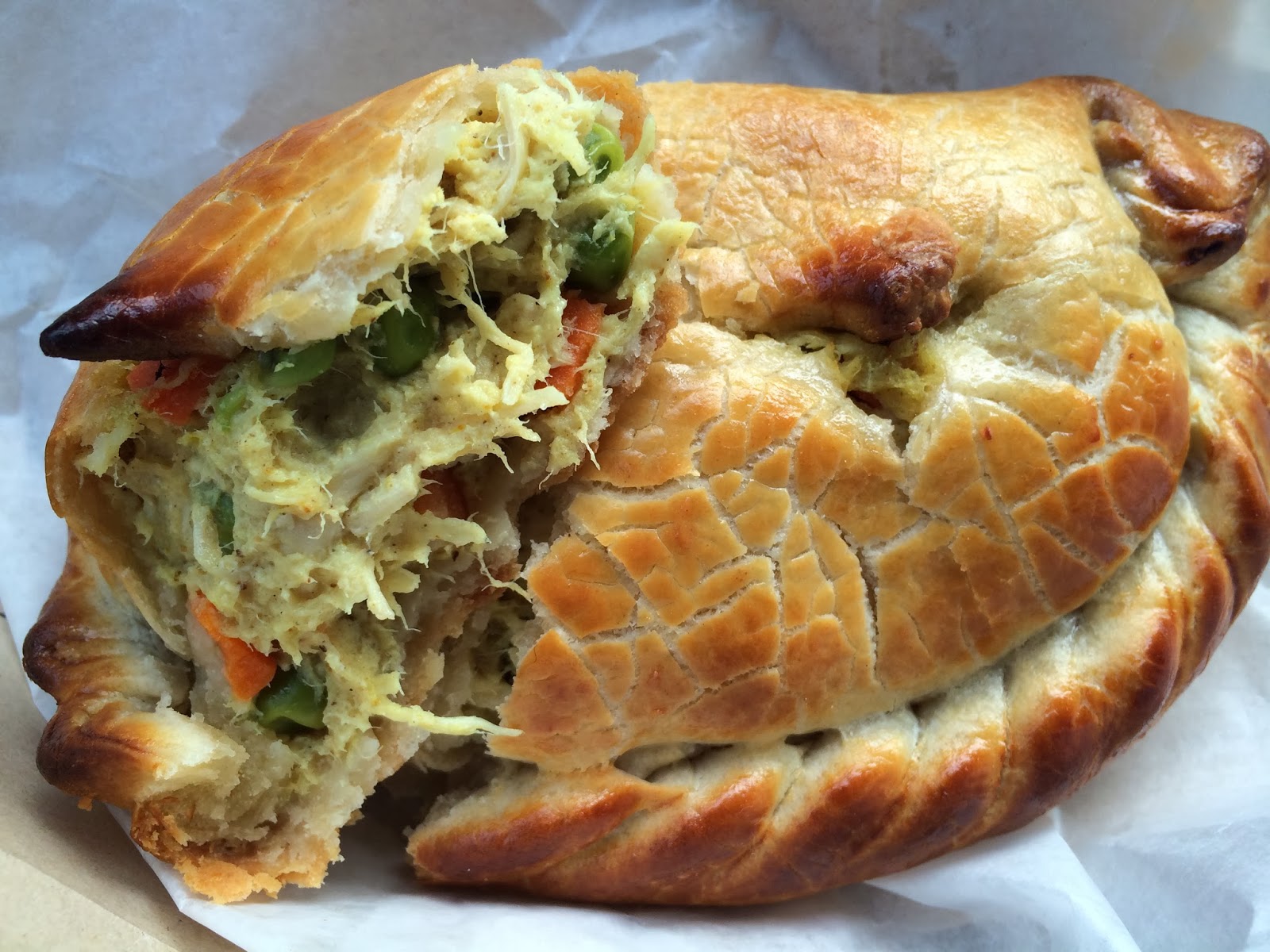 There were two pasties that seemed to be the no-brainers of the menu.  The first was the Chic-Pot-Pie.  I mean, who doesn't love chicken pot pie?  This pasty was made with their traditional crust and stuffed with shredded-poached chicken, peas, carrots, and a béchamel sauce.  They add a touch of curry to give the flavor some complexity.  Honestly, it was pretty tasty.  The pasty was filled to the brim with the chicken mixture.  The shredded chicken was moist and that curry flavor was subtle, yet impactful.  It was weird... you knew something strong flavored was there, but you could easily second guess yourself away from the curry ingredient.  The crust was a little on the drier side and was flavorless.  It wasn't that pleasant to eat, and I even ended up wasting the rolled up edges.  I think they needed to add a little more of that béchamel to help the dry crust.  All in all, it tasted like chicken pot pie which was great. 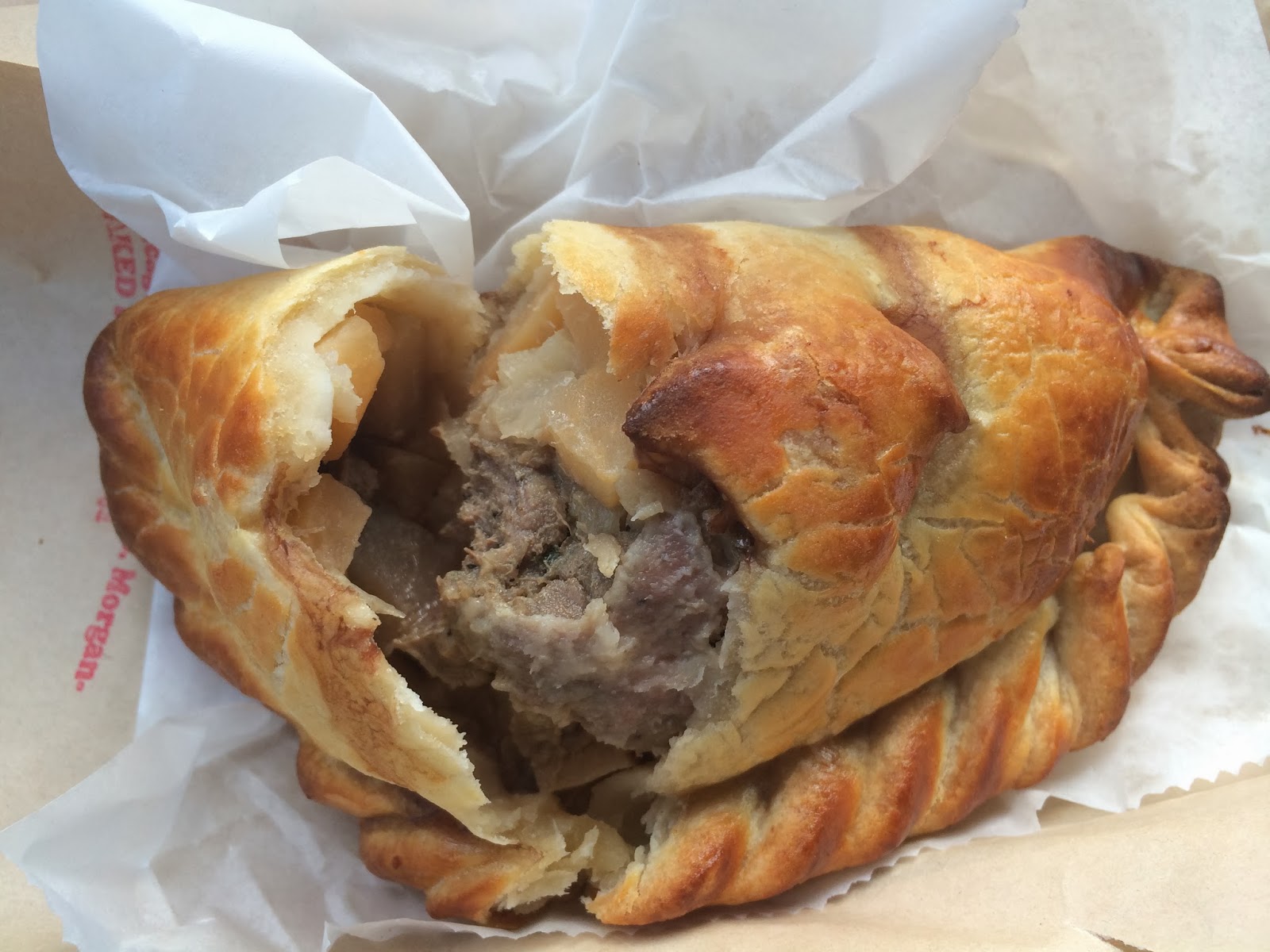 The other obvious choice was to stick with tradition.  The Yooper Pasty was their version of a traditional Cornish pasty.  It was filled with sirloin, diced potatoes, rutabaga, and onion.  A little salt and pepper and that was about it.  This is where my disappointment set in.  I bit into this pasty and immediately thought bland.  That blandness was not helped by the dry crust, which left a peanut butter-like feeling in your mouth.  The potato and rutabaga was cooked too much and became almost like mush.  This pasty needs some kind of sauce to dip in to otherwise you will too be annoyed with the dry, flavorless pie.  For $5.00 + tax, it seems quite expensive for the size.  I know it is just 5 bucks, but that money can go a long way at many different restaurants in the city.

The DOs/DON'Ts:
DO:
- Plenty of street parking in the area.  Be aware of their hours and also check out their food truck if you do not want to come to their storefront.
- Food Truck Twitter: @BridgeportPasty

DON'T:
- Don't get just one.  You will probably not be full.

Posted by Joseph Esparaz at 3:19 PM