If you are looking for a great place in the city for pie... definitely come here!  They have minimum six or so pies each day and the menu keeps changing.  They always have a few stable items (fat elvis, apple pie) but I like how they keep alternating flavors.  I do wish the place was a little bigger.  If you want to eat your pie at the store, cross your fingers that one of their three or four small tables is open. 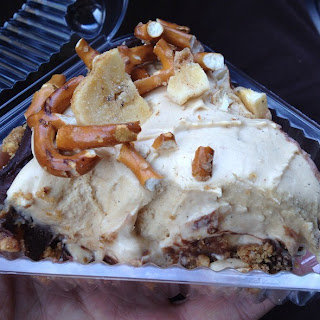 If you have ever heard of Elvis's favorite sandwich... this has to be Elvis's favorite pie.  It is a chocolate based pie topped with a peanut butter mousse, sliced bananas, and crushed pretzels!  It is probably one of the richest pies I have ever eaten and I advise not eating the entire slice in one sitting.  I did that and stomach doesn't feel to well after.  But honestly, it is next to impossible to stop eating the pie! 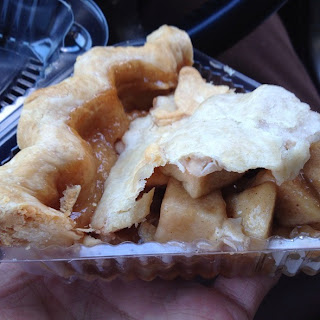 Good old fashion apple pie.  The apples were on the crunchier side so had more of a crisp than the normal mush that I was used to.  And the crust was extremely flaky.  You could tell this was more "high class" than your normal apple pies.  I liked the crunchier apple but my friends that tried it weren't the biggest fans.  I guess its all personal preference. 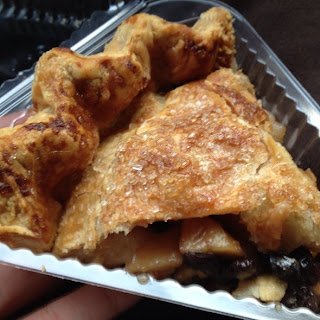 The only reason I bought this slice was because they were handing out free samples of the pie.  And once biting into it I had to grab a slice. It was a nice spin on their normal apple pie.  Adding the currants gave the pie a nice contrast... it made it almost less sweet without taking away too much of the sugary goodness.  Currants in general have a sweet and tannin undertone so it was a great add to the pie!

DO:
- Make sure to ask which pies they sell mini pies for!  Sometimes it seemed to be a little cheaper to purchase the mini pie than two or three slices of a same pie.
- Do understand that the prices are a little high.  Paying $5 or so for a piece of pie may seem pricey, but trust me, it is worth it!

DON'T:
- Don't expect to get a sit inside their little store front.  They have like three tables I think.
- Don't order your pies too late for Thanksgiving... They stop selling a week before sometimes depending on how popular they are that year.

How far would I walk for this place?