A Quick Word:
Yusho is based on an awesome concept... "Japanese Street Food."  I was excited to find a Japanese restaurant that doesn't just specialize in sushi.  However, after trying their food, I was disappointed with too many dishes to give it a high rating.  We both left the restaurant thinking it was just average.  I did find some of the dishes to be excellent, and most of the presentation was creative.  Some dishes are served on japanese newspaper and others on skewers.  But after looking beyond the presentation, some of the dishes just failed miserably on taste in my opinion.  The prices seem fair and the atmosphere is nice.  It wasn't packed when we came here on a weekday.  I do think it is a great place to try unique and strange foods, but overall the meal is just not that memorable. 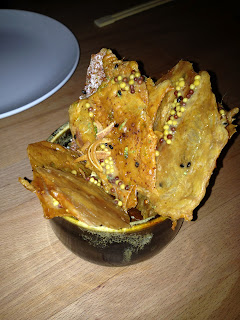 This menu item was so random and interesting that we had to have it.  I had heard good things about it and in the end, I thought it was just OK.  It was simply chicken skins deep fried until super crispy and seasoned with garlic and japanese mustard.  I couldn't really taste the garlic as much as I would have liked but the crispy skins and mustard did make a pretty good combo.  I still wished for more seasoning. 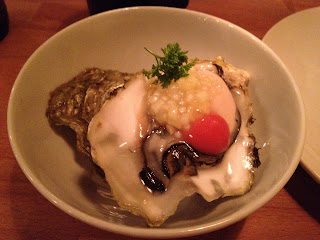 Without question, this was my favorite menu item we chose at Yusho.  First of all, just look at the amazing presentation.  They oyster was huge and topped with an apple cider and sake sauce and soft tapioca.  The oyster was fresh with not even a hint of fishiness.  I would have ordered a dozen if the price was a little cheaper but I suggest ordering at least one per person to try! 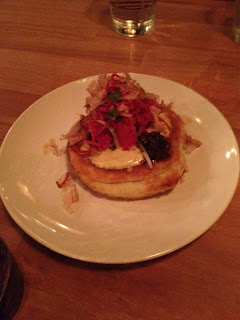 I really didn't understand the name when the waitress recommended it to us, but when she said shrimp pancake, my friend and I knew it would be good.  It is a shrimp pancake that reminded me of a dim sum item from Chinatown.  The pancake was actually thicker than what I expected but still very soft and fluffy.  It had lots of savory elements including the shrimp and a cabbage slaw.  Definitely eat everything together as one bite because the chickpea and cabbage goes really well with the soft pancake.  I enjoyed this one a lot! 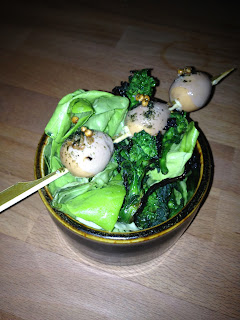 This was a last minute decision because we wanted to try one other dish.  And it was the biggest disappointment.  I absolutely disliked this dish.  The quail eggs were pickled, skewered, and served with charred broccoli rabe.  Unfortunately, the "charred" vegetable was too burnt and all you could taste was ash flavor.  The quail eggs had that strong pickled flavor but they were served cold.  I was hoping for creamy quail eggs, but when cold they seem like hardboiled eggs which were just not pleasant to eat. 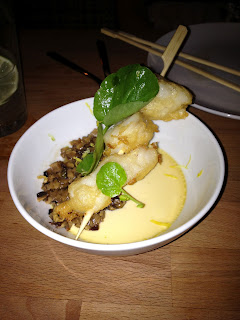 This was another average dish.  The cod was lightly breaded and deep fried.  It was served skewered and with a side of shitake mushrooms and watercress.  The best part of the dish was the mushroom mixture the fish was sitting on.  The fish tasted like any other fried piece of fish.  It was not a unique dish and something I probably wouldn't eat again. 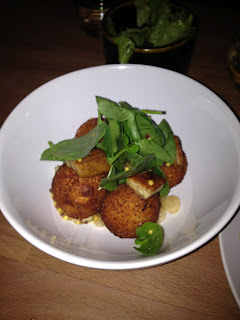 I am glad we ordered this dish last minute as well!  I was very surprised to see four large croquettes with huge pieces of eel sitting on top.  The potato croquettes were freshly fried, making them crispy on the outside and hot/mushy on the inside.  I love croquettes and these were exceptional!  They had chunks of grilled eel on top and I believe also fried into the croquettes.  It was all topped with a light whole grain mustard sauce.  Yumm! 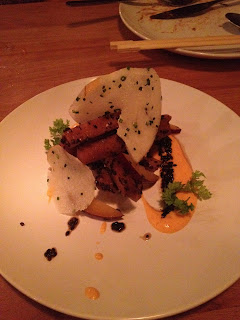 Another awful dish.  The gobo root was explained by the waitress to be one of the most popular dishes at the restaurant.  I think the curiosity may make it popular, but it is not tasty.  The actual root was tough and chewy rather than being crisp like I expected.  It has almost no flavor except for the sauce made with the asian pear and the plum.  Honestly, the chunks of asian pear and plum were the best part of the dish.  Don't order it! 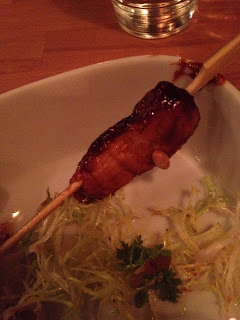 Almost forgot to take a picture of the dish.  We grabbed it so quickly and definitely enjoyed the simple preparation of the sweetbreads.  I never really know exactly which part restaurants use when they make sweetbreads, but its usually thymus or pancreas.  Here, they cooked it in a japanese bbq sauce and lightly grilled it.  It was served with microgreen leaves and toasted soybeans.  These are very rich and creamy for being a chunk of meat... I think everyone needs to try sweetbreads sometime in their life and this is a great place to do so.


A couple of Beers 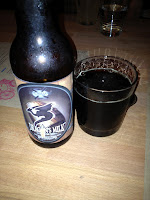 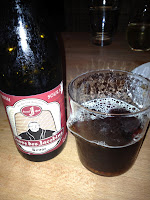 I honestly don't know much about different beers.  I have been trying to appreciate different styles and I chose these two.  I enjoyed both.  I know one was a sour beer which I had never had before but check them out and let me know what you think.

The DOs/DON'Ts:
DO:
- Do order the drinks.  They made very good cocktails and also offered a great selection of beers.
- Definitely order some of the weirder named items.  I found that if I knew what it was, it definitely wasn't as good as I would have expected.
- Come during the weekdays if you don't want to wait too long or you want more of a quiet atmosphere
- There is plenty of free street parking in the area!

DON'T:
- The desserts aren't very impressive so I suggest you pass on them.