A Quick Word:
Here is another one of the Food Truck leaders fighting for the better food truck rights in Chicago.  La Adelita Truck focuses on mexican classics from quick, "on-the-go" tortas to dinner platters.  It isn't as authentic as I would like (especially when leaving so close to Pilsen), but they do offer better Mexican food then what is offered in most of the city.  I would definitely ask for extra salsas and guac because they really make the tortas much better.  This food truck is sometimes known as a "Ghost" mainly because it is difficult to find and never in your area.  So if you find it... try it out.  It is better than most trucks but the food isn't as fresh as I would like (probably because it is kept in warmers since trucks can cook yet). 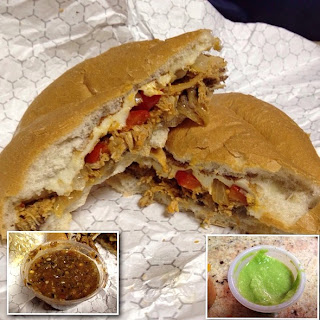 Finally, I thought this torta was more legit than the other trucks I have tried... But it still falls short in some ways.  First, for the positives, it was a nicely seasoned chipotle pulled chicken torta topped with grilled red peppers, panela cheese, and a black bean base. They somehow were able to keep everything warm without having it all dry out.  The bread though was not thick enough to hold up all the ingredients.  The sandwich tends to fall apart and for a food truck that is a huge mistake.  Food trucks are made for people to eat "on-the-go" and I find this sandwich a little to hard to do that. The jalapeño guacamole was very tasty so definitely add that to the torta. 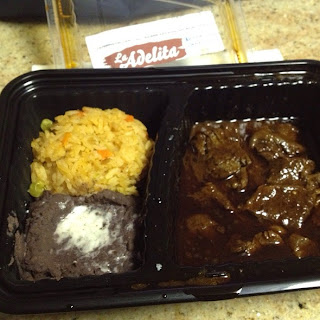 Extremely tender cuts of steak that are sort of stewed in a ghost pepper pasilla sauce. When I heard ghost pepper I was honestly worried about the spicy aspect... But they pulled it off. Nice spice and just enough heat to make ur nose sweat. It was served with Mexican rice and refried black beans.  The rice was nothing special and the refried black beans seemed to be not seasoned at all.  The meat was great quality or maybe it was just cooked enough to make it tender.  For the price, I would be a little disappointed but when compared to some of the other food trucks this is a decent option.  My suggestion is to mix some of the pasilla sauce with the rice and beans... It gives everything a nice spice that is much needed. 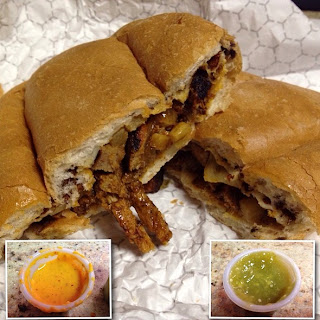 This was one of the popular choices on the truck.  I though it was pretty good. The pork was cooked in a chipotle style sauce and was then paired with grilled pineapple, panela cheese, and a black bean base. I added the orange sauce; it's kind of like a spicy pepper cream sauce. Definitely use that. The other sauce was a salsa verde. Also tasty but not my favorite.  The overall appeal of the torta though was a little soggy.  I thought the bread was not a good vessel for all the toppings they put on the torta.  The flavors were definitely complex, but a much needed spice was needed.

The DOs/DON'Ts:
DO:
- Do follow them on twitter to find their location.
- I would definitely try this truck before some of the other ones in the city
- Ask for extra sauces.  The salsas and the guacamole help make the sandwiches so try them out!

DON'T:
- Don't let the food sit too long in the wrappers they provide.  It makes the bread get real soggy and fast.