A Quick Word:
BIG & little's was a restaurant I saw on the TV show Diners, Drive-ins, and Dives.  I looked online and saw hundred of positive reviews of a wonderful fast food joint that has reasonable prices and fresh seafood entrees.  I was extremely disappointed with this place.  When I arrived at the restaurant, there was a long line to wait in, minimal seating, and prices that were SIGNIFICANTLY HIGHER than what I saw/read about online.  The food was definitely tasty, but, in my opinion, it definitely doesn't live up to the hype that the internet gives it. 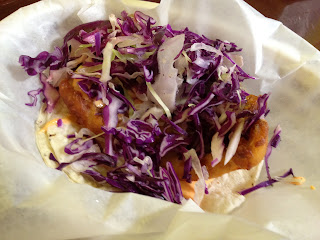 The samurai white fish taco was delicious.  It was a nicely battered fried fish topped with a vinegar based slaw and some kind of tartar sauce/aioli.  The fish was perfectly cooked and the slaw gave a nice freshness/crisp to the taco.  The tortilla was a thin corn tortilla warmed up nicely.  I think the tacos are the best deal by far but still a little pricey at $4.75 for this guy. 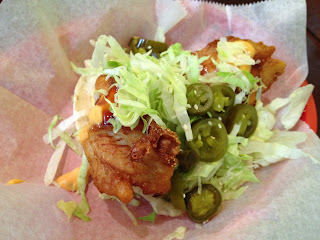 This was definitely my favorite menu item my brothers and I chose.  It was a well battered piece of tilapia, a little heavier on the breading than the samurai.  It was had some kind of chili aioli and was generously topped with shredded lettuce and pickled jalapeños.  I liked this one because of the spiciness from both the aioli and the jalapeños.  The fish was once again perfectly cooked and much larger than the tortilla.  This one was around $4.50 so still a little pricey for one taco. 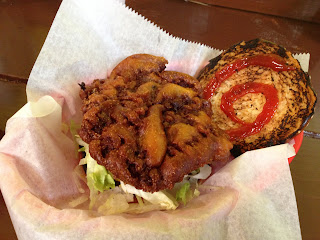 My brothers and I figured we had to try a deep fried burger... mainly because we had never seen in anywhere else.  And I understand why it is no where else.  This was something I would never get ever again.  The burger was breaded in a beer batter and deep fried to a medium doneness.  It was served on a grilled bun with some lettuce, mayo, and ketchup.  This was way to greasy... and the fried batter does nothing to make the burger better.  It just gives a crunchiness that the grilled bun would have achieved just fine.  I would stay away from this burger.... 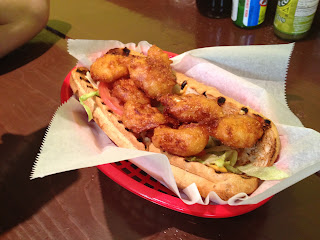 My little brother chose the fried shrimp po boy.  This was another one of their seafood items done well!  At a heftier cost around $12, the po boy had about 8 deep fried shrimps stacked on top of a grilled hoagie and served with lettuce, tomato, and another aioli that was hard to describe.  It reminded me once again of a tartar sauce... just not as thick or creamy.  The shrimp were well seasoned before they were deep fried which I appreciated.  Each bite had a nice chunk of shrimp making this sandwich one of the better choices we had at BIG & little's. 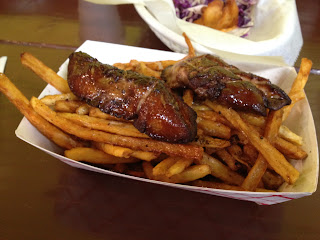 The foie gras and fries is a great concept that I wish I could have enjoyed more than I did.  I left the restaurant thinking this was more of a gimmick than anything.  At the cost of $16... I came in with the mindset that this would be one of the greatest fries.  Anyway, this item has freshly fried french fries topped with nice generous portions of pan fried foie gras.  They do put a nice sear on the foie gras and then pour the entire liquified fat on top of the fries.  Surprisingly, there was almost no flavor except for an oily foie gras undertone.  I couldn't even eat the fries once the foie gras was all gone... It was creamy and rich and maybe something to try.  I just would never order these again. 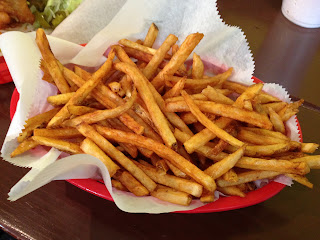 The truffle fries are another gimmick in my opinion.  They were nicely fried french fries which were supposedly topped with a truffle oil I believe... I couldn't taste much truffle and then the fries were terribly under seasoned.  I had to add much needed salt and a little pepper to make them more edible.  I would just stick to the tacos and not get drawn in by the names of some of these sub par items.

The DOs/DON'Ts:
DOs:
- There is plenty of parking around the area so go ahead and drive here.  They actually have a free parking lot as well next to the restaurant.
- Do order the tacos... I think it is the best deal (which isn't that great of a deal), but the flavors are definitely there and it isn't as greasy as some of the other menu items they offer.
- Do try the Po Boys... I really liked this sandwich and thought it had a nice balance of grease and freshness and the seafood really shines.

DON'Ts:
- Don't eat the Foie Gras and Fries... there is honestly nothing special about these. The greasiness is a 15 out of 10 and I find it more of a gimmick than anything else.