A Quick Word:
Here is one of Chicago's food trucks that is now turning into a store front.  5411 empanadas will be opening up soon near Clark and Diversey.  Anyway, this truck focuses on a Latin American classic... the empanada.  And, they fill it with contemporary American favorites.  All of the empanadas that I have tried pack great flavor; unfortunately, the cost is so outrageous and the size is small that they are almost impossible to have for a meal (unless you are willing to spend $15).  Each empanada is I believe $2.50 or $3.00.  But each of them are maybe 3 inches long MAX.  I honestly ate three one time and it didn't even make a dent in my hunger.  For those reasons, I could only give it an average rating. 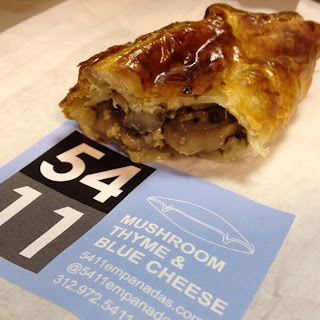 An empanada that is full of mushrooms sautéed in butter, garlic, and thyme.  They mix the mushrooms with blue cheese before stuffing it inside the flaky empanada crust.  The filling was very flavorful and the empanada crust was not too heavy.  But without the filling, the crust was way too plain.  It was flavorful to be honest and I wish they had seasoned the crust also. 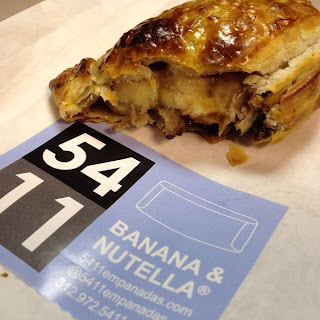 Another tasty empanada.  This one was stuffed with coarsely chopped bananas mixed with nutella.  The hazelnut chocolate spread is definitely the star of this empanada overwhelming the banana flavor.  It all melts to a gooey mess because of the deep frying process.  The crust was getting soggy probably because they were kept in warmers.  I wish they could fry them fresh.

The DOs/DON'Ts:
DO:
- Do follow them on twitter.  It is basically the only way to find their baby blue food truck
- Do order a bunch, the size is disappointing so it takes a lot to feed a hungry person
- I have had a couple of the other empanadas (sorry for no pictures)... The spinach and cheese one is tasty, just a little heavy on the spinach flavor.  And, the BBQ chicken one is one of their more popular empanadas but I don't see what everyone else does.  The chicken is shredded and the sauce is nothing special.

DON'T:
- Don't expect the empanadas to fill you up.  I consider this more of a late afternoon snack than a meal by itself.