A Quick Word:
I finally came to Hopleaf after about a thousand recommendations and only hearing amazing reviews.  It took me a few years to finally make it out here, and I am disappointed I didn't come sooner.  This Belgium bar is home to one of the largest beer lists I have ever encountered.  They even have a secret locked fridge with rarer choices.  But, Hopleaf isn't only known for their beer.  It's their food, especially their mussels, that keep attracting foodies, tourists, and locals.  The atmosphere is very laid back, yet the food speaks gourmet.  The wait staff is very knowledgeable about beers and beer pairings.  If you have any question, don't hesitate to ask.  It may be a little bit of a drive, but I promise, you will leave with a full stomach and exposure to many MEMORABLE dishes and beers.  For that reason, a 5-mile rating was given! 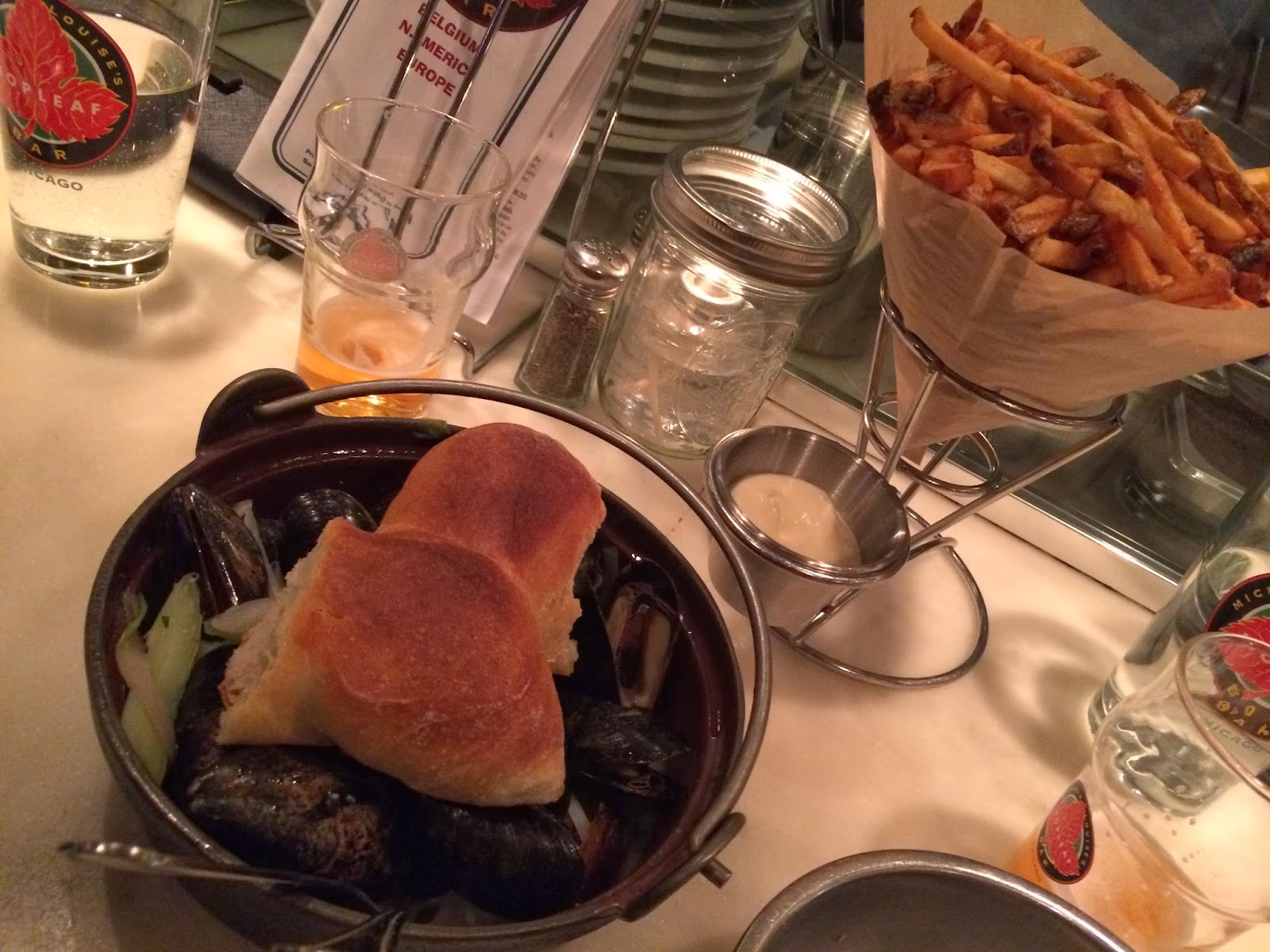 It is a well-known fact in Chicago that Hopleaf has some of the best, if not the best, mussels and frites dish.  So it was quite obvious that this would be our first pick.  Prepared Belgian-style, the mussels are cooked with a Witterkerke white ale and a mixture of shallots, celery, and thyme.  It is served with a nice chunk of toasted bread and an entire cone of frites.  Where to start... well, the mussels are definitely the large type and they are very generous with the portion size.  I loved the subtle beer flavor in the broth.  Definitely tear apart some of that bread and let it soak up the broth until soft.  You will not be disappointed.  In terms of the frites, these are constantly being fried and are crisped up to perfection.  They are heavily seasoned and come with house-made aioli.  I would even dip the frites into that broth. If more food wasn't coming, I may have even drank it. 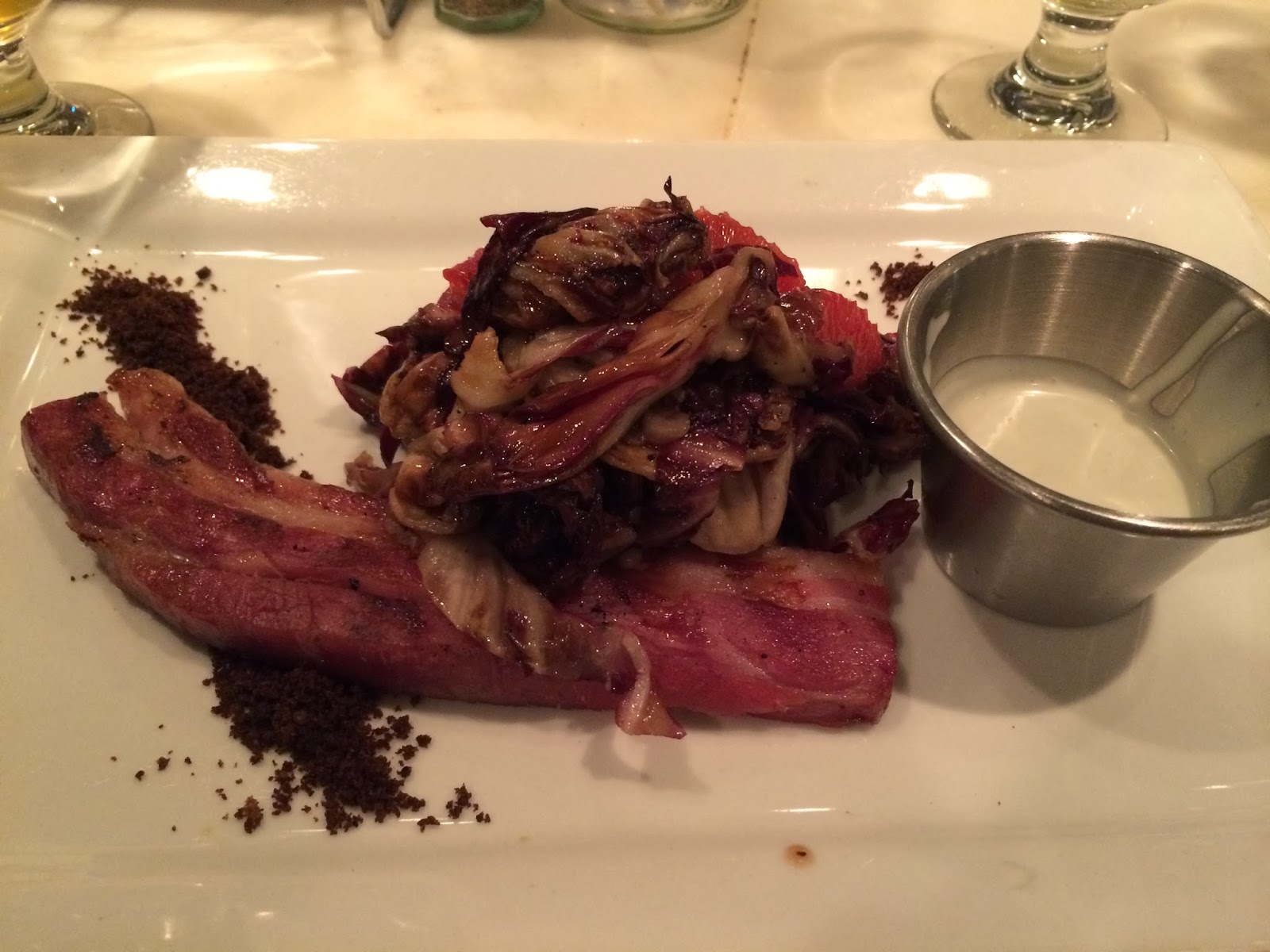 After looking at the salads, it is a no-brainer on which one we would choose.  Anything with pork belly is essentially a must order.  Here, the pork belly was charred on the grill before being served alongside grilled radicchio, sliced blood oranges, a blue cheese cream, grapefruit vinaigrette, and plenty of rye crumbs.  The salad reminds me of that deconstructed-type with each component strong enough to stand alone.  Grilling the radicchio made it lose all of its texture, but brought out that grill-smoke flavor.  The texture was replaced with those rye crumbs.  All of it made the pork belly seem a little less fatty, despite being pork belly.  I really liked the blue cheese cream, but ordering it on the side was smart because it is much stronger than your typical blue cheese.  But it was needed to pair well with the sweet and sour flavors from the citrus fruits.  I highly recommend this salad. 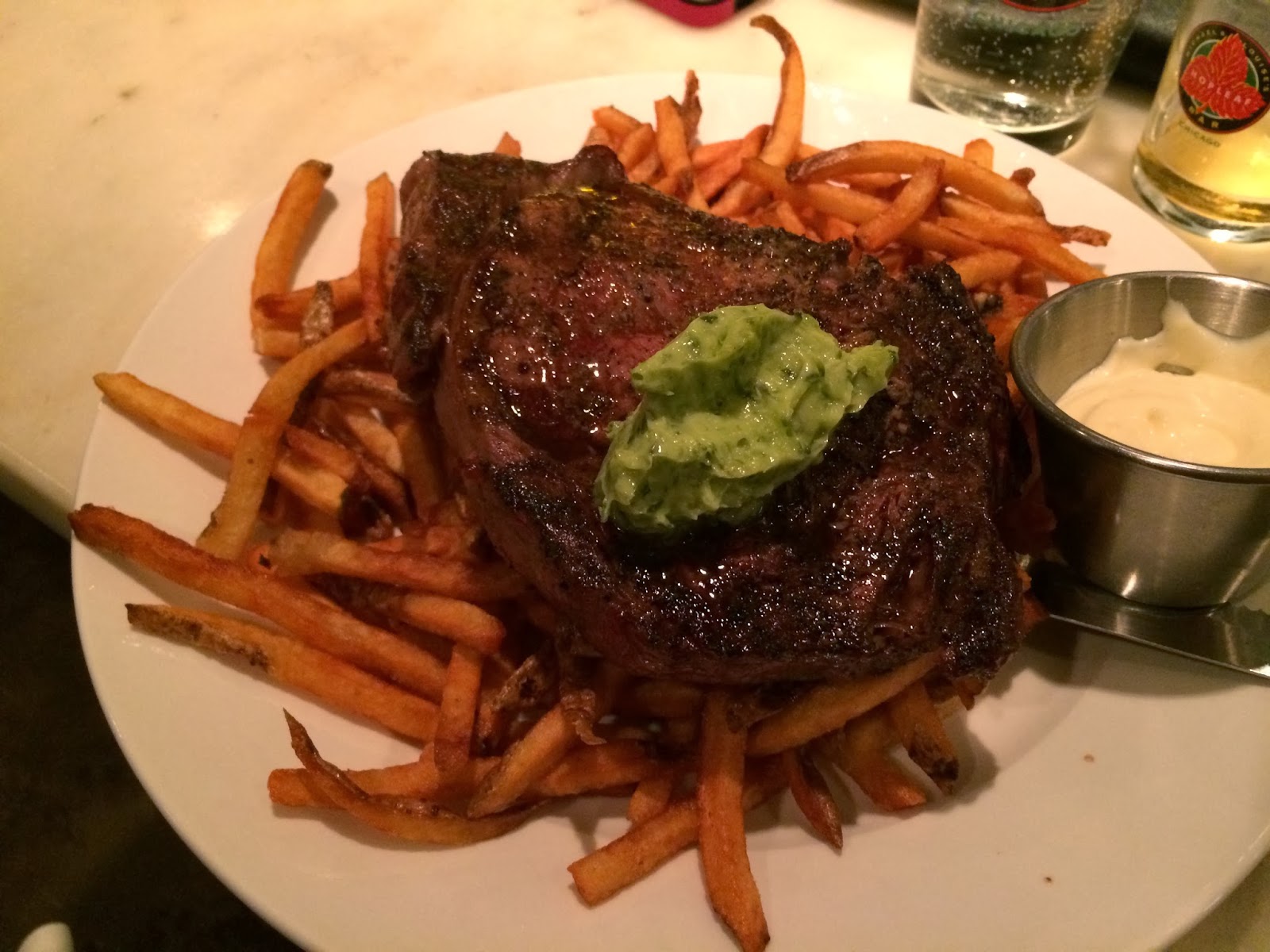 As usual, my girlfriend and I decided to share both of our entrees.  Her choice was the steak frites.  We benefited from a deal we bought online so she chose the 12 oz. ribeye as her steak.  It came with a huge scoop of herbed butter and was served on a bed of their frites.  Her desired temperature was medium and FINALLY, a place that got the meat temperature correct.  Before Hopleaf, I was on a cold streak with correct temperatures.  The steak itself was tender, juicy, and well-seasoned.  It had a nice char crust to it, but still kept that true pink center.  It had a great fat to meat ratio.  When the herbed butter melts over the steak, another set of complex flavors emerges... one that is more earthy.  Our beer expert paired the ribeye with a darker beer that brought out its pepperiness.  Great steak, maybe offer another side rather than more frites (especially if the customer orders the mussels and frites). 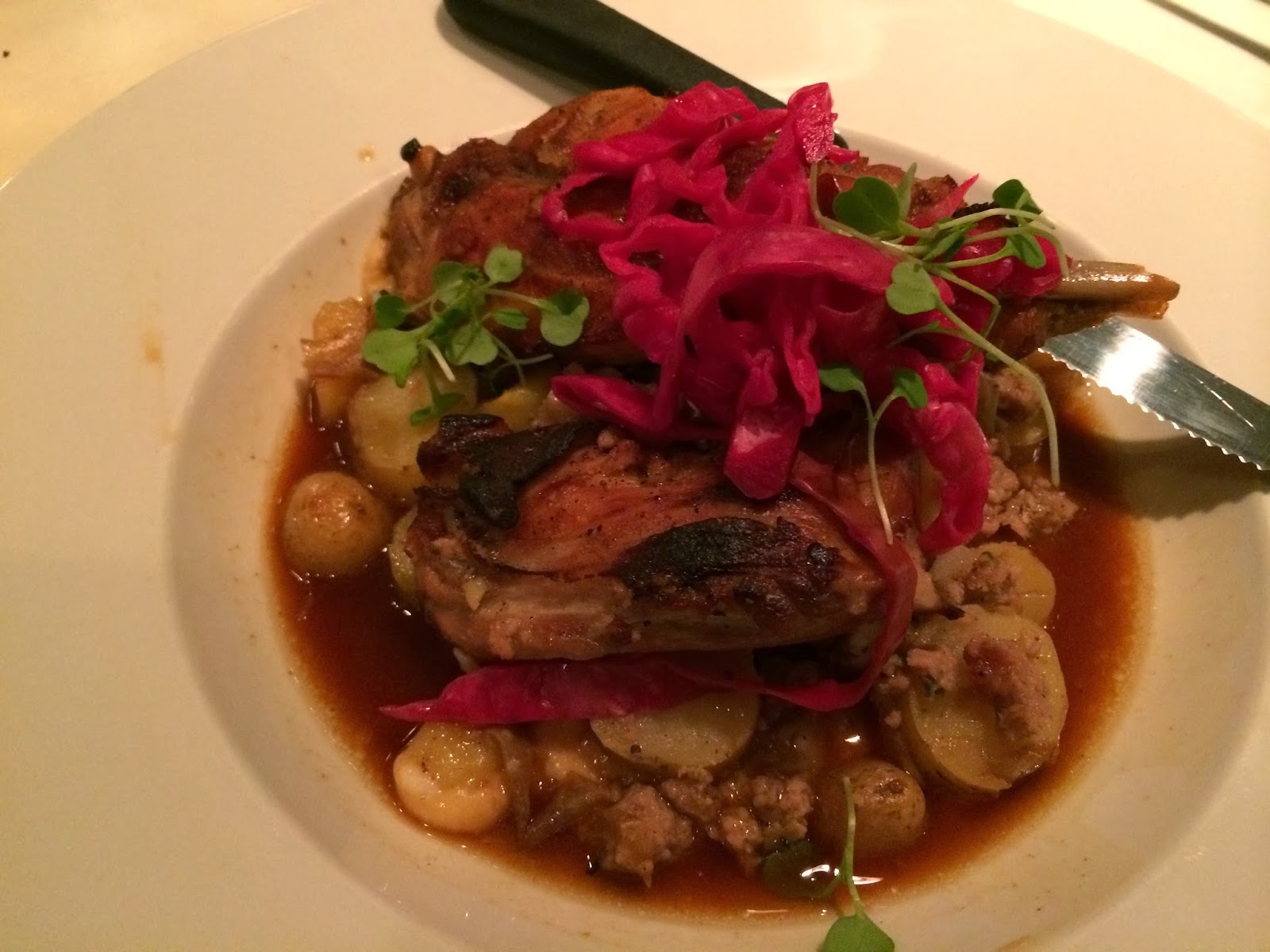 Our other entree was my choice.  But, she knew exactly what I would choose... Rabbit.  After speaking with our waiter, I learned that rabbit is a very classic Belgian dish with many different preparations.  Hopleaf's current preparation was a Kwak-braised rabbit.  Kwak is a Belgian strong pale ale, traditionally drank in a strange wooden contraption.  Anyway, the dish came with a cauliflower puree, rabbit sausage hash, and pickled cabbage.  A rabbit jus was then poured around the entire meal.  This dish was not only delicious, it was MEMORABLE.  From the first bite of the rabbit hash to the very last drop of that rabbit jus, I savored every bite.  The rabbit itself was a huge portion of both white and dark meat.  It was moist and had the mildest of mild game flavor to it.  The hash was a dish in itself.  Fingerling potatoes are cooked till soft and the rabbit sausage had its own complex spice mixture that added even more to the dish.  And, finally, that pickled cabbage was the icing on the cake. It had a sharp, vinegary flavor that cut some of the savoriness and richness from the rabbit and the jus.  You can really tell every part of this dish was methodically executed.  Unbelievably delicious. 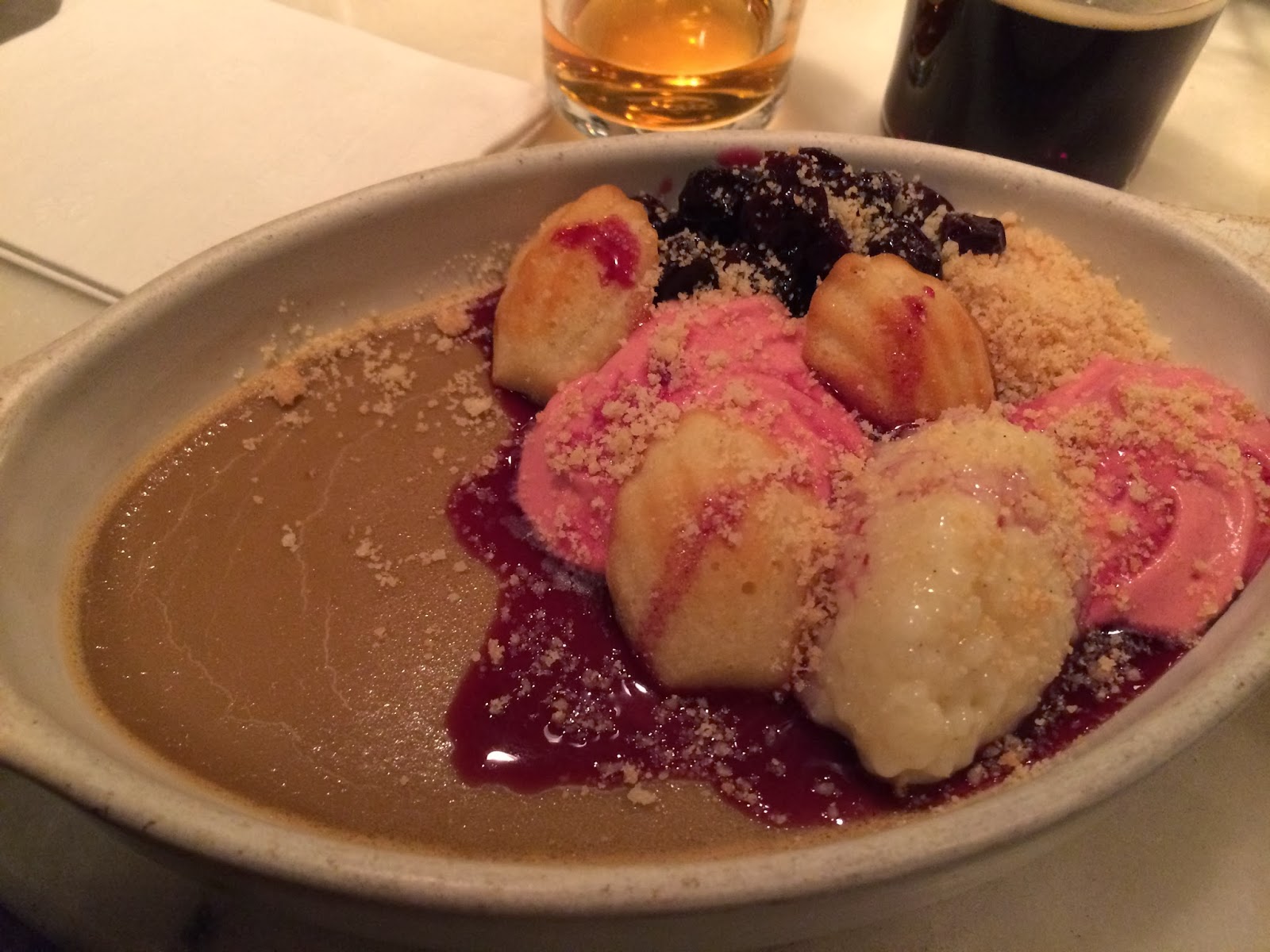 After the huge meal with each course being more than amazing, we were both excited, yet dreading eating even more for dessert.  But, just like the other dishes, one of their desserts stood out as being unique.  The earl grey pot de creme was a melting pot of some many flavors.  First, the custard-like creme was flavored with earl grey tea.  It was complimented by a raspberry sorbet, a blueberry compote, vanilla tapioca, madeline butter cookies, and some kind of crumble (maybe from the butter cookies as well).  This may sound like too many contrasting flavors, but it wasn't.  In fact, this was the perfect dessert to end the day.  It was a little on the lighter side, but just imagine mixing different fruit flavors with hot tea and then dipping cookies into your tea.  Maybe this was their inspiration when making the dessert.  Personally, I thought the pot de creme portion was the highlight because of its light, silky texture that had a mysterious flavor to it.  I suggest eating it in huge bites with a little of everything.  I wouldn't trade this dessert for anything. 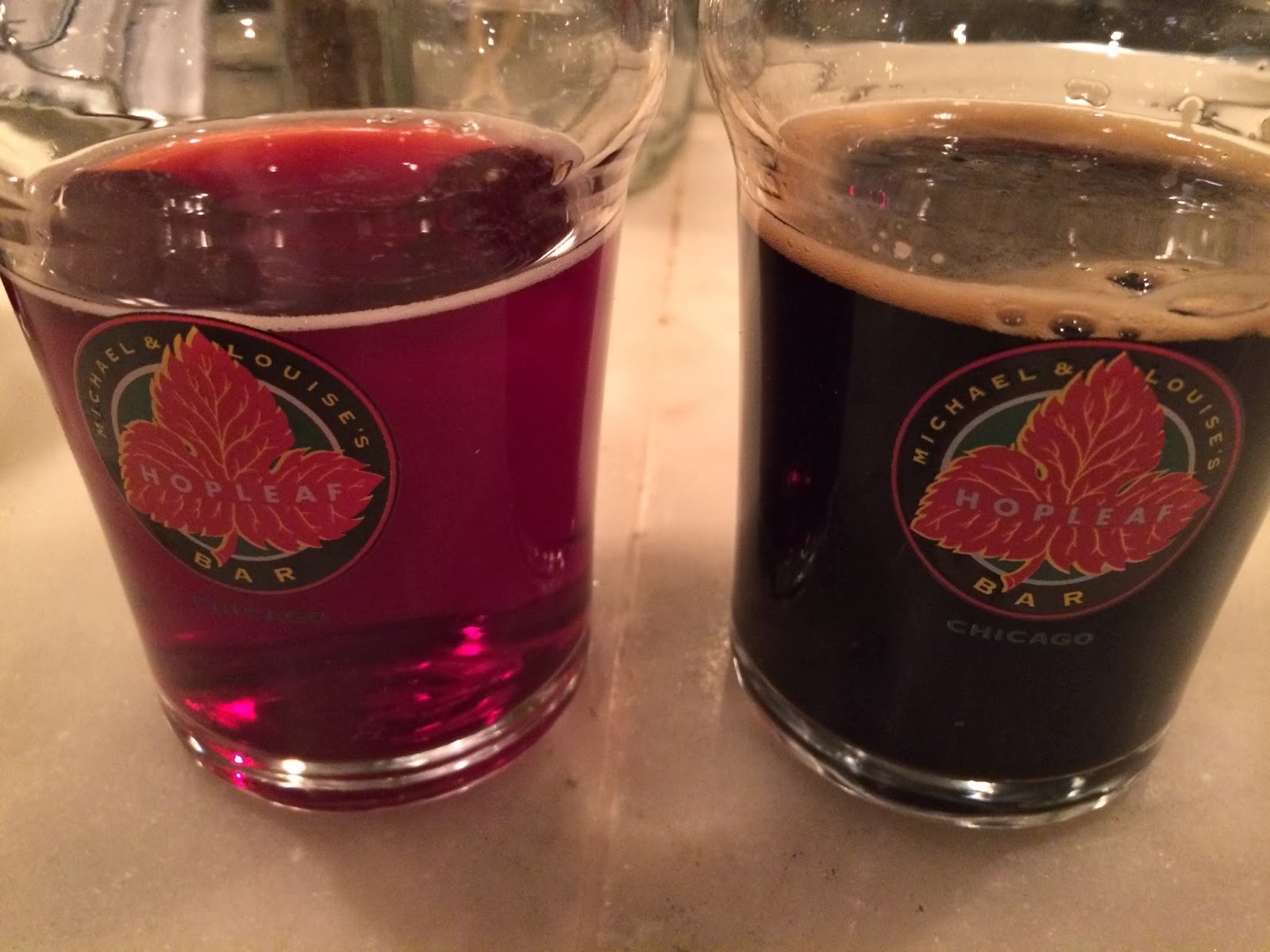 Once again, our beer expert gave us two incredible beer pairings for dessert.  I was unsure of the exact names or brands of the beers, but one was a cherry beer and the other a chocolate stout.  I was pleasantly surprised to try both beers before the dessert.  The cherry had a very prominent cherry flavor and a nice sweetness to it.  The chocolate stout a little on the bitter side.  However, after eating the dessert, the profiles completely changed.  The cherry was sour and the chocolate stout reminded me exactly of dark chocolate.  In a similar way to wine, I found out beer flavors change depending on what they are paired with.

The DOs/DON'Ts:
DO:
-  Come early or come on weekdays.  This place does not take reservations and gets packed really fast.  With their extensive beer selection, expect to wait whenever you do arrive.
- Ask about their special beer collection (not on the menu).  Amazing choices from Firestone Walker to Goose Island's Bourbon County Stout.

DON'T:
- Don't forget frites are served with multiple dishes.  Be careful not to order too many of them.

Posted by Joseph Esparaz at 2:31 PM