A Quick Word:
Fusion restaurants have become popular in Chicago, and many places are taking advantage of this craze.  One of the more popular and more established restaurants is Del Seoul... a Korean BBQ restaurant that uses a Mexican technique in their preparation.  If you haven't seen the pictures below, think TACOS!!  Here, all of the different Korean BBQ options are served on warm tortillas and topped with Asian-inspired slaws and sauces.  Personally, I think it is a great way to explore Korean food without being scared away by weird kimchees.  The service is quick and to the point.  Tables can be difficult to find during busy meal times, but ordering to-go is just as good.  I really enjoy coming here and I think the concept is one-of-a-kind.  For that reason, I decided on a 4.5-mile rating. 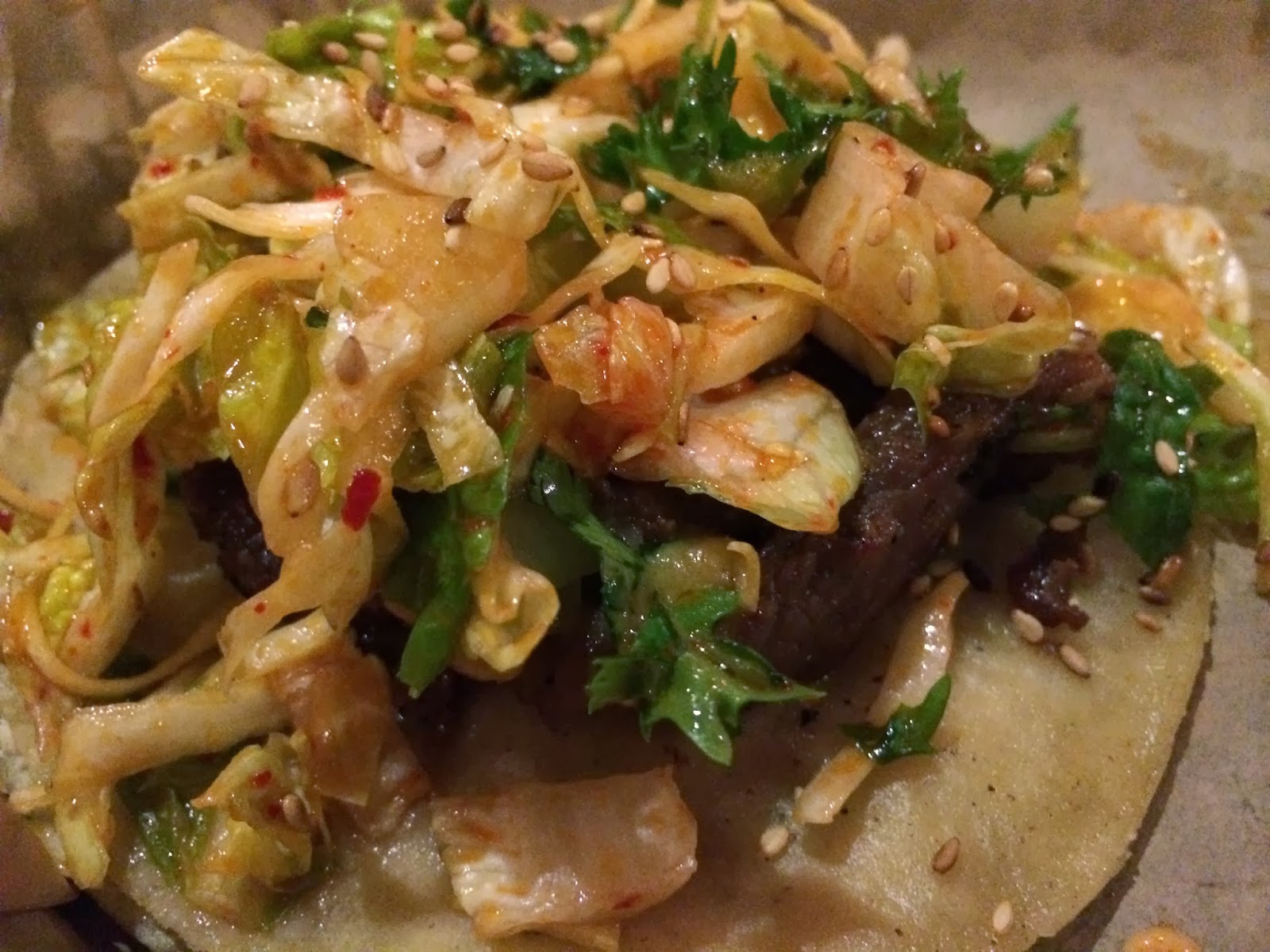 The classic Korean BBQ dish is Kalbi, which is a grilled short rib.  At Del Seoul, they taco-ize it.  The kalbi taco is that same sweet marinaded short rib grilled and served on a corn tortilla.  It is topped with a cilantro-onion relish, their house slaw, and toasted sesame seeds.  This is one of three of their most popular tacos and one of the better ones.  The meat was tender, but still had the chew as if we were eating kalbi off the bone.  It was on the sweeter side when compared to the other two tacos.  I think their tacos are great size and they are very generous on the toppings.  The slaw was fresh and could honestly be eaten as a salad.  Highly recommended! 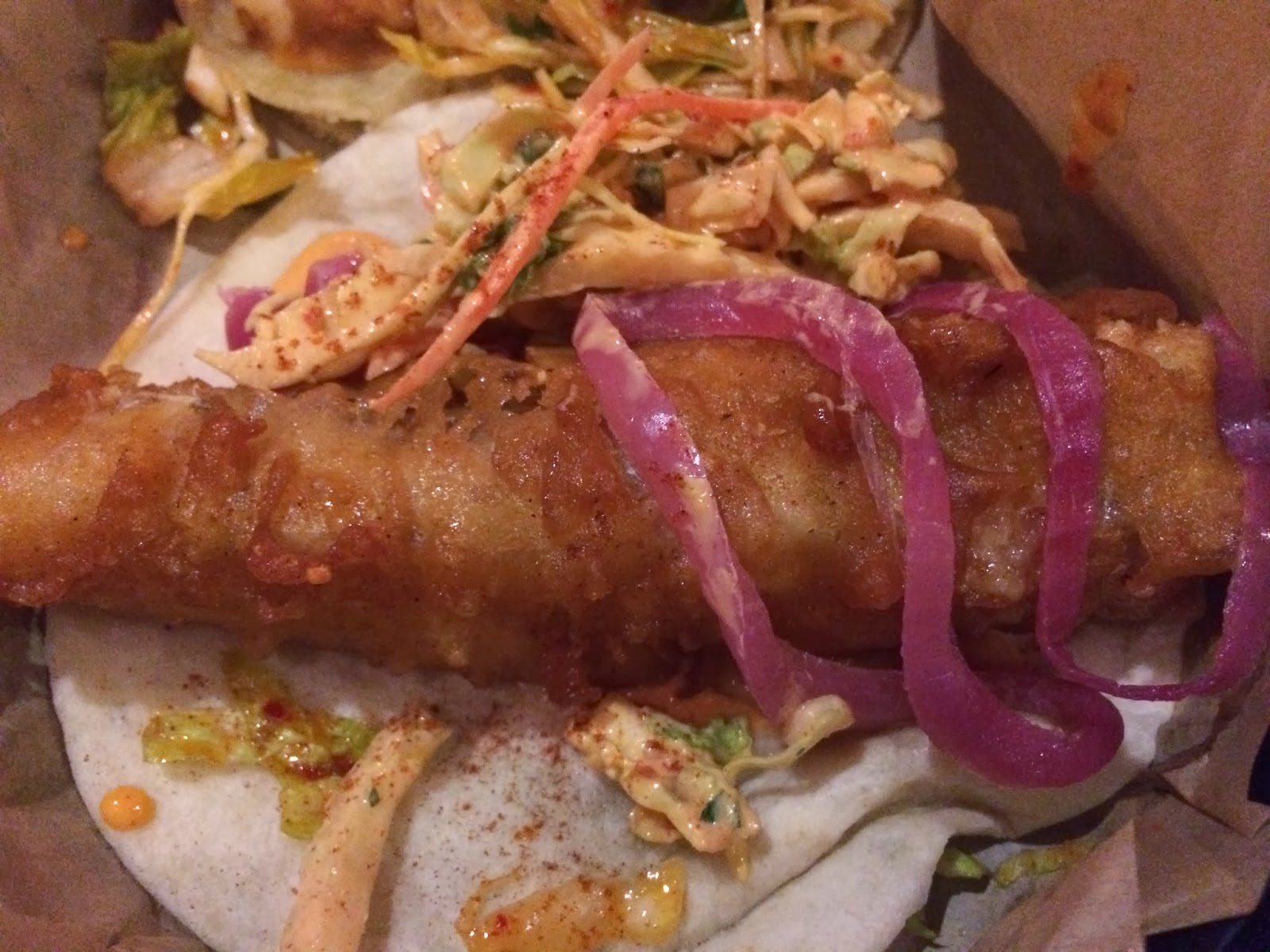 Personally, fish tacos are my favorite.  I knew I could sneak a couple bites of the kalbi from my girlfriend, so ordering the fish taco was an easy choice.  It is called sambal fish taco because of that special sambal sauce (chilies, fish sauce, shrimp paste, ginger, garlic, and spices).  The fish filet itself is tempura battered and fried.  It is served on a flour tortillla and topped with red onions, a napa slaw, and a diluted version of that sambal sauce.  Overall, it was much larger than the other tacos and the chunk of fish was huge.  It was fried till crispy and not as oily as I would have expected.  The pickled onions have that vinegar flavor which always pairs nicely with fried foods.  I would have liked a little more heat, but still, a great taco and another one of their popular choices. 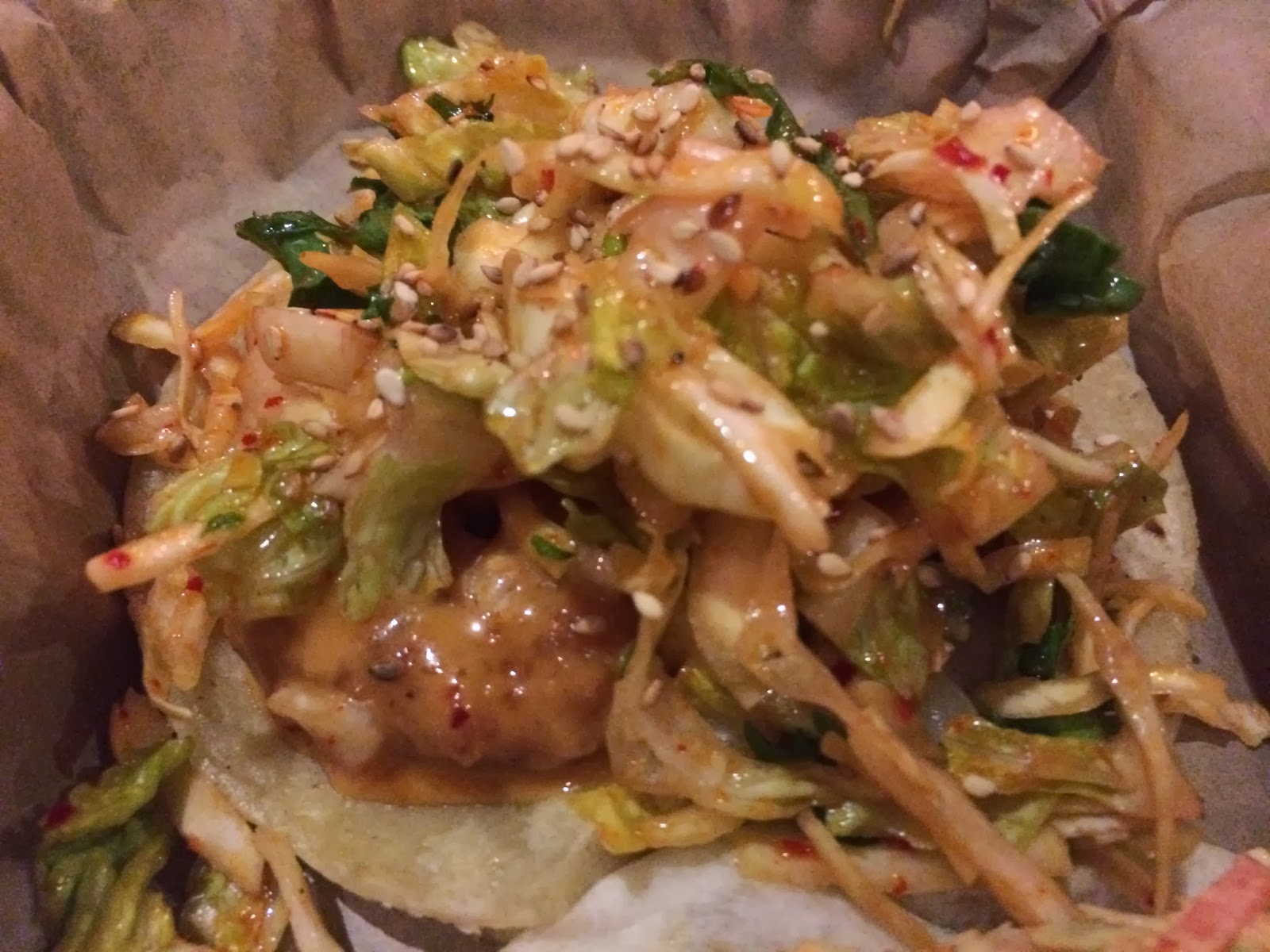 At home, I am known to make several versions of shrimp tacos, so it was fun to see how Del Seoul made theirs.  The taco uses a corn tortilla as its base before being loaded with panko battered shrimp, a cilantro-onion relish, asesame-chili aioli, and their house slaw.  So why did I like it so much?  The heat was finally felt with this taco.  It was a little on the spicier side, but nothing that overwhelmed your tastebuds.  The fresh slaw again was on point and the balance between crunch, fresh, salty, sweet, and spicy was perfection.  I would order this taco, like the others, time and time again.  Delicious!

The DOs/DON'Ts:
DO:
- If the line is long, I suggest having one of your friends or significant other grab a seat while you place the order.  The restaurant is small, so finding seats can sometimes be more difficult than expected.
- I suggest sticking with the tacos.  Some of the other menu items take up to 15 minutes to make, while others are french fries covered in sauces.  Tacos are my favorite menu items!

DON'T:
- Usually there is a line to wait in, but don't be discouraged, it surprisingly moves fast and the food comes out quickly!

Posted by Joseph Esparaz at 2:44 PM