A Quick Word:
With so many Italian restaurants in the city, it becomes quite a task comparing the pros and cons of each.  Osteria via Stato is one of those Italian restaurants that everyone seems to enjoy but no one raves about.  They are located next to their sister restaurant, Pizzeria via Stato, which specializes in a wood burning pizza oven.  When eating in Osteria, the dining room reminds me of a small Italian village and is much more private and peaceful than the pizzeria near the bar.  The food was all very tasty and they do a great job accommodating for allergies, specific diet restrictions, or a simple request.  I did find their menu to be a little on the safe side as opposed to some of other restaurants with huge variety.  But I did like how whatever they did make... they made it well.  The prices are fairly similar to most of the average Italian restaurants in the city, but the portions here are definitely smaller.  They tend to run behind in reservations and aren't the best at greeting.  In all, I gave it a rating of 3.5 miles because of the great, yet non-memorable meal and the OK service we experienced. 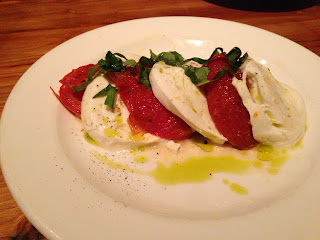 For my meal, I decided to order two different appetizers.  We had a long night planned, so I felt this would be a lighter option.  The first dish was the caprese salad.  I was pleasantly surprised when my dish arrived with oven-roasted tomatoes rather than the typical thick cut beefsteak raw tomatoes.  The oven roasted tomatoes weren't warm, but they were soft and well seasoned.  It almost reminded me of a simple marinara made extra chunky.  Like all caprese salads, this was served with thick slices of fresh mozzarella and a little bit of basil.  Some olive oil was drizzled on top which brought everything together nicely. 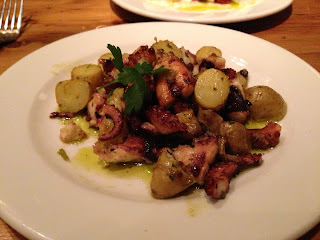 The second appetizer I ordered for my meal was the grilled octopus.  The simple preparation of octopus was served mixed together with roasted fingerling potatoes and a drizzle of olive oil.  As I mentioned, the octopus was just lightly grilled, allowing the fresh seafood flavor to be the main star.  It wasn't fishy at all and it was extremely tender.  It was a great dish, but the potatoes seemed out of place to me. 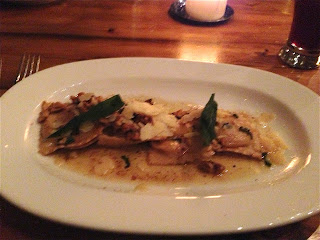 One of my friends decided on the butternut squash ravioli.  This is one of my favorite pastas, especially when served in the brown butter and sage sauce.  I was able to try a bite of her dish and it was great.  The ravioli was cooked perfectly and the filling had a mushy, sweet consistency.  They aren't very generous with the filling which is unfortunate.  I did hear from others that they thought it was too buttery.  I could see that after trying some of the other pastas, the sage and brown butter compliments the raviolis very well. 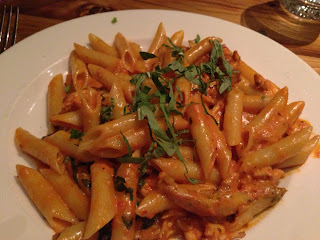 When reading penne as the title, I thought this dish was going to be boring.  A couple of my friends ordered it and I was glad to be able to try a couple bites.  The penne was topped with spicy tomato cream sauce, chicken, and fresh mozzarella cheese.  The chicken was thinly sliced, almost shred-like.  The tomato cream sauce had a nice spice and the mozzarella just added even more creaminess to the pasta.  Nothing unique, but definitely tasty. 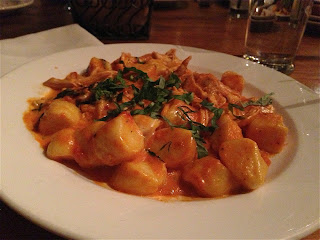 Everyone loves gnocchi, but not everyone likes the duck ragu that should have came with this dish.  Instead, my friend ordered the gnocchi with the spicy tomato cream sauce with chicken.  It was a great switch because the tomato cream sauce had great flavors, but I was disappointed that I couldn't try the duck ragu.  The gnocchi was very soft, yet not mushy.  For people that don't know, gnocchi is a potato dumpling that is boiled like a pasta and served with pasta sauces.  Definitely a must-try-noodle, but not a must-try-sauce. 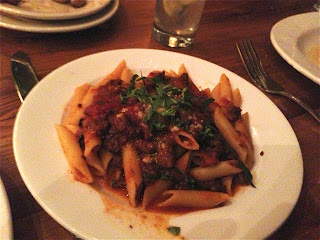 Pappardelle seems to be the house-noodle of most Italian restaurants.  This was supposed to contain that noodle, but was switched to penne out of personal preference.  They topped the dish with their signature 3-meat ragu (Which meats? I wasn't sure).  My friends ordered just a 1/2 order because they also decided on ordering a meat option as you will see below.  Once again, noodles cooked well, but with the sauce, it was nothing special. 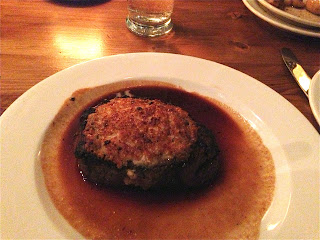 The filet mignon is the one steak option available at Osteria.  They have three different preparations--either gorgonzola crusted, parmesan crusted, or balsamic glazed.  My friend ordered his steak medium rare (which is my personal favorite as well).  The steak was cooked closer to medium, but because of the cut, it was still very tender.  I believe he chose the parmesan crust, but I couldn't really tell.  The gorgonzola crusted sounds interesting, so if anyone has had it, please let me know how it is. 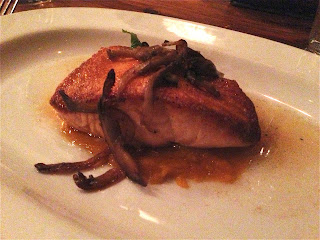 Lastly, one of my other friends ordered the salmon.  They lightly sear the salmon to crisp up the skin and then finish it in the oven.  It was served on a thin layer of mashed butternut squash and was garnished with crispy oyster mushrooms.  I personally was unable to try the dish, but everyone seemed to enjoy it and it was all gone by the end of dinner.

The DOs/DON'Ts:
DO:
- Do mix and match pastas... you can choose your switch up the sauces if you are craving one noodle but not the preparation they are offering.
- The half order is great for pairing with one of the meat/fish dishes.
- Make sure you ask for your drink to be served on the rocks because they serve most of their drinks in annoying martini glasses.
- Bathrooms are strange... you have to go upstairs to 3rd floor of hotel and there are rooms marked as men's and women's restrooms.

DON'T:
- Don't be late to your reservation.  They always have lines and will give your table to someone else.
- I don't suggest ordering a half order of pasta for a meal.  I thought some of the pasta full orders weren't that large.
- Don't be rushed.  We arrived on time and still had a 30 minute or so wait before we were seated.

Posted by Joseph Esparaz at 3:54 PM