A Quick Word:
Slurping Turtle is one of the first, if not the first, noodle shops in the heart of the city.  Located just off the river, this restaurant has become a hot spot for foodies, especially during lunch.  Their specialty obviously involves in-house-made noodles, but most people don't know, they also own one of the few authentic bincho grills in America.  The atmosphere of the restaurant is very friendly with a huge communal table  being the centerpiece of their dining room, a tiny open air kitchen (where you wonder how all the food can be made in such a small kitchen), and a few balcony style booths that overlook everything.  We were lucky enough to get one of those coveted 2nd floor booths as you can tell from the picture below.  For being a noodle shop, anyone that comes should definitely order at least one bowl of their noodles, but they are huge and should be shared (I wish they offered different sizes).  Besides the noodles, I highly suggest ordering one of their newest creation... the bento box.  The cost of lunch here will run nearly $20 with tax and tip unless a lot of sharing takes place.  Overall, the restaurant does have some great dishes, but also some awful desserts.  When taking everything into consideration, the price was too high for the food we tried, thus making me lower its overall rating to just a 3.5 mile rating. 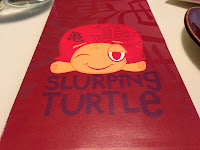 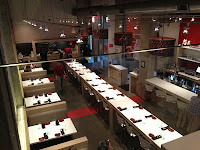 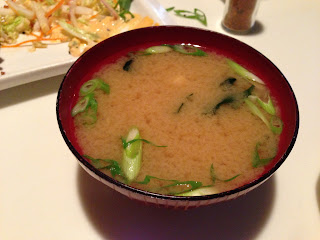 The bento box comes with a bowl of piping hot miso soup.  I am a huge fan of miso soup, especially on a cold, Chicago winter day.  The soup was not excessively salt and the miso wasn't overwhelming.  It had quite a few pieces of nori (seaweed) that had ben rehydrated by the soup.  Also, a few small cubes of tofu swam in my soup.  Great flavors and served hot... couldn't ask for more. 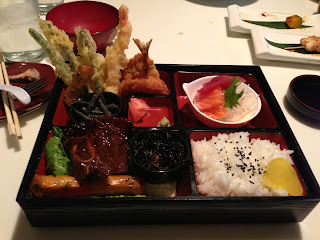 Despite wanting to try the ramen at this noodle shop for many weeks, I ended up ordering the bento box.  I figured I would have a couple bites of my friends' bowls and the bento box came with everything!  After choosing short ribs for my protein (other options include salmon or chicken), I was now waiting to see what the tapas and sashimi of the day would bring.  My bento box was huge... it came with two slices of each of the sashimi of the day (salmon and tuna), a variety of vegetable tempura, a piece of shrimp tempura, a few tapas of the day which mine included some sort of sweet potato/crab croquette and an interesting piece of fried fish.  It also came with a pickled green bean salad, a few sticks of daigako imo, the short ribs (my protein choice), and of course a nice size helping of sticky white rice sprinkled with black sesame seeds.  Also remember that miso soup is included (as explained above).  Overall, the bento box was amazing.  The short ribs were tender, but came with a disappointingly very small portion (two tiny pieces).  The different fried tapas were incredible, especially the fried fish with the extremely crispy fish tail.  I absolutely enjoyed every bite of the daigako imo which is a fried japanese sweet potato that seems to be caramelized in some special technique.  The sashimi wasn't as fresh as I was hoping so I ended up using a little soy sauce and the wasabi and ginger to help.  The bento box is a MUST HAVE at Slurping Turtle, but it will set you back $18 without tax or tip... so be prepared. 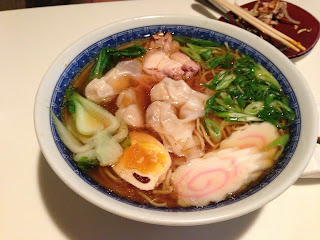 My friend that lived in Japan for a short while knew exactly what he wanted.  This huge bowl of ramen was filled with the in-house made ramen noodles, a traditional soy broth, chicken wontons, grilled chicken pieces, snow peas, a soft boiled egg, and garnished with some scallions, bok choy, and a couple slices of fish cake.  The noodles are perfect... they were tender and soaked up the flavors of that amazing broth.  My friend added some of the traditional Japanese spices to his broth which was incredible.  The size of the bowl was next to enormous.  Honestly, it was too much for one person and for the cost of $14, I think two hungry people or three lighter eaters could share.  I did see people sharing, so do not feel uncomfortable to share bowls. 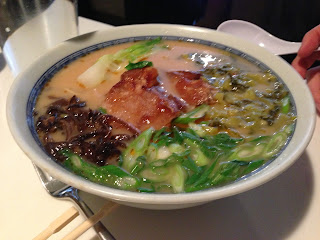 My other friend ended up choosing the bowl of Tonkotsu which is their pork-heavy noodle soup option.  It also overly packed with their thin ramen noodles, but this time, it sits in a pork broth and is topped with a braised pork shoulder, pickled mustard greens, enoki mushrooms, and garnish of scallions.  I was able to have a few bites of this noodle bowl also.  Immediately, I knew a pork broth was used... it was a little murkier than the shoyu wonton bowl, and also heavily pork flavored.  In fact, it was almost too much pork for one dish.  Even the the noodles soaked up the pork flavor.  I wasn't a huge fan of this noodle choice.  Once again, the bowl was too large for one person to eat in a meal.  Definitely share or I guess pack it up for left overs if you aren't sick of it by then.  I wish they would offer a smaller lunch size bowl or even just a half option. 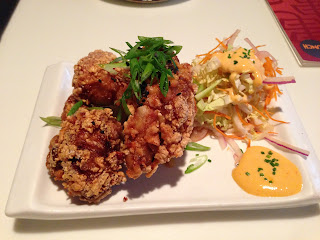 This was a great appetizer.  Whenever seeing "duck fat fried" on a menu, I try to stay away mainly because it never adds anything special to whatever is being fried.  However, for the fried chicken at Slurping Turtle, there was a richer and crispier skin on the chicken--a flavor that I was experiencing for the first time.  It came with three wings and also a chunk of breast meat.  For nearly $10, it is quite expensive, especially for the amount of wings and the small salad with a mayonnaise based pepper sauce.  It is pricey, but a delicious appetizer for sure. 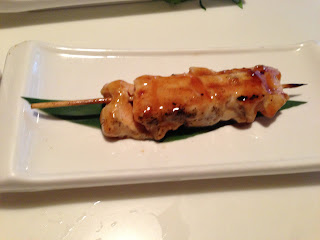 I understand the concept of the bincho grill which is a Japanese imported grill that uses very hot charcoals and specially trained chefs that know exactly where to place skewered meats and veggies depending on the temperature.  Unforunately, I think our waiter was a little confused... explaining it as a 1000 degree rock that sears.  Anyway, all the items are served a la carte and simply seasoned if at all.  The end result was an OK skewer of cubed chicken pieces with a light caramelized coating.  The seasoning seemed to be non-existent on this grilled chicken, but I can say it was tender.  Definitely not worth the price so I would avoid for sure. 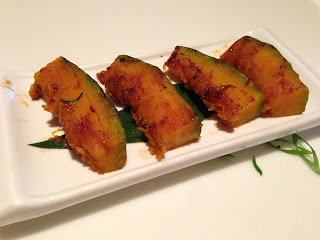 As mentioned earlier, one of my friends lived in Japan for a short time.  He saw kabocha squash on the menu and immediately wanted to order it.  I was glad we did because the squash was the better of the two items we ordered on the bincho grill.  It reminded me of a butternut squash but with a more earthy taste and much less sweetness.  The consistency was interesting because it was very firm, yet had an outer layer of mushiness that everyone associates with squash.  The grill did add some smokey flavor as well.  Try it out!


Macarons
Ehh... so when it comes to macarons, I have started to become picky.  I can say these are definitely not Paris macarons and not even close to the ones from Hendrickx Belgian Bread Crafter (my favorite in Chicago).  Instead, these were a Japanese influenced assortment of macarons that fell short in many ways.  In terms of flavors, they have five different ones--Raspberry Wasabi, Yuzu, Chocolate Sesame, Oba, and Caramel Soy.  All of them are very lightly flavored so you might read wasabi but notice nothing wasabi-like at all.  And what would caramel soy taste like... besides caramel?  I think they tried to make them japanese themed but didn't put too much time into each flavor.  The yuzu did have a citrus flavor but more flowery than anything.  And the Oba, the flavor that the waiter said everyone hates... was actually the best one.  Definitely a confused attempt at making macarons and not a dessert I would recommend or ever order again.

The DOs/DON'Ts:
DO:
- Just a warning.  The food does not all come out at once.  Let's say that four different tables orders a specific bowl of noodles... the kitchen prepares all of those bowls at once and then moves on to the next item.  So if you come in a group, don't be surprised if your friends' meals comes out before yours or vice versa.
- Bento box is the way to go.  I know it is called Slurping Turtle and they specialize in noodles, but I would really suggest ordering a noodle bowl to share and also a bento box to share.  Honestly, the bento box is even a great appetizer for everyone to munch on.
- SHARE THE NOODLE BOWLS!  They are too big for one to eat alone.

DON'T:
- Macarons are not worth ordering.  The flavors don't resemble what they describe.  Too plain for me.
- Don't order too much from the bincho grill.  It is a unique cooking technique, but it is overpriced for portion sizes and also not that memorable.