A Quick Word:
Leona's has become one of the staple Italian restaurants UIC students frequent.  Located in the heart of Little Italy, Leona's offers a huge menu with portions reflecting the hungry appetites of students.  Each entree either comes with the choice of a massive side or maybe even two... or something equivalent, for instance, a loaf of bread.  Regardless of what you choose, you will become full.  Unfortunately, I think Leona's sacrifices on quality for the quantity they offer.  It appears that most of their pastas are half thought out which makes the overall flavor and experience disappointing.  Honestly, each items is hit or miss and doesn't even come close to any of the other famous Italian restaurants in the city.  For average Italian food with many subpar menu choices, I guess you could visit Leona's... just don't be in a hurry for it. 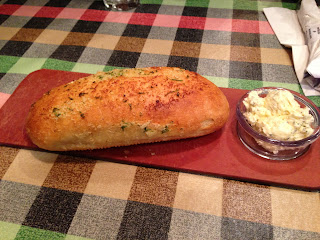 This huge loaf of garlic bread comes with the any of their pasta entrees.  It feels like a freshly baked loaf with garlic and other italian seasoning baked right on top.  It is served with a huge helping of garlic butter.  My brothers and I split the loaf, spreading generously the garlic butter.  In my opinion, it was a little too salty.  The garlic flavor did stand out if you used the butter.  The bread was also a little on the oily side so just be aware. 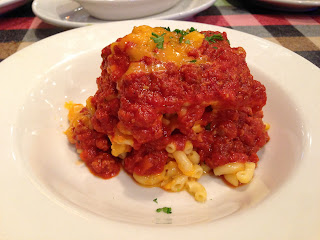 I ordered the Meaty Mac... which reminded me of the days of Hamburger Helper.  The dish was their four cheese mac & cheese covered with their homemade meat marinara sauce.  The petite portion is half the size... making the price seem ridiculous.  It was nice to offer a smaller portion, but maybe help the customers out on the price too (not just a couple dollar discount).  The mac & cheese was supposedly made with a sharp cheddar, but I honestly couldn't tell any specific cheese.  The marinara was the classic sauce.  It also came with the garlic bread and a cup of soup or salad.  Overall, the dish left us all wondering if something was missing?  So couldn't have been that great. 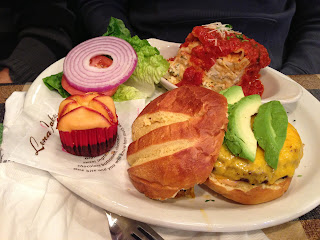 My older brother stuck with a classic burger.  The Avocado Burger was a 1/2 lb patty topped with avocado, roasted onions, cheddar cheese, and a chipotle sauce.  He requested raw red onions on the side and it also came with the typical lettuce and tomato.  The burger was big and after adding all those ingredients, it was huge.  The avocado added an awesome creaminess to the burger and the chipotle sauce was actually spicy enough to stand out.  I really enjoyed the burger.  I was disappointed however in the fact that they charged I think $1.00 for raw onions.

The Five Cheese Lasagna could have been called however many # cheese because once again you couldn't tell the differences because very mild cheeses were used.  The only one I noticed was the ricotta cheese because of the thick layer they use.  The side portion was huge... just as big as the petite version of my dish I ordered.  Once again the price discrepancy is confusing and one that should be addressed (but I guess it is a great deal for the person getting the burger).  Overall, the lasagna was nothing special in my mind.  The same tangy marinara covered the lasagna and it tasted italian, but it was definitely not memorable. 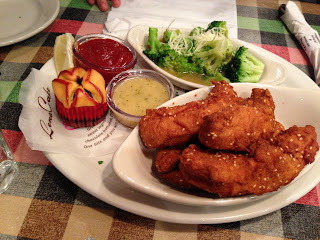 My little brother choose chicken tenders for his meal.  He was caught off guard however when asked what TWO sides he wanted.  I guess he didn't realize it came with two sides.  Anyway, he choose the broccoli and the rigatoni and pesto (described below).  First of all, the entree comes with 5 huge chicken tenders.  They are fried to order and sprinkled with sesame seeds. They come out piping hot with the perfect crispiness without having too much breading.  It comes with a honey mustard sauce and also a ketchup.  I did wish the ketchup was more fancy... maybe horseradish added to it or something.  The honey mustard was my favorite of the two sauces.  The broccoli as his first side was more like broccoli scampi... huge chunks of broccoli swimming in a plate of butter and topped with cheese.  For trying to be healthier by ordering vegetables, the butter and cheese is definitely overkill.  It also comes with a Lena Cake for a nice little dessert (also described below).


Rigatoni and Pesto Side 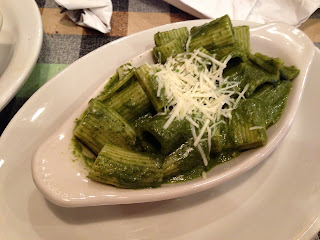 My little brother choose the pesto based pasta as other side.  Rigatoni noodles were cooked well and generously covered in their pesto.  Unfortunately, the pesto had an overpowering basil flavor... as if they didn't use any other ingredients besides pureed pesto.  It also appeared to lack olive oil because it sort of beaded up and stuck to the noodles as opposed to covered them entirely.  I wouldn't order this side. 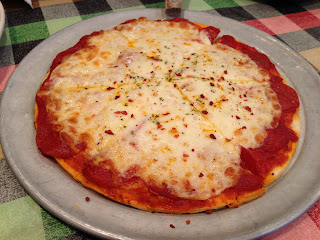 The pepperoni pizza was awful.  Luckily, I had a coupon for a free 9 inch pizza with purchase of $25 or more.  The pizza came out looking like it was pre-made or frozen.  The pepperonis were placed under the cheese which didn't allow them to get hot and crispy.  The crust appeared pre-made from the perfect circle and cardboard like flavor it had.  I was really disappointed.  But I guess what can you expect for free? 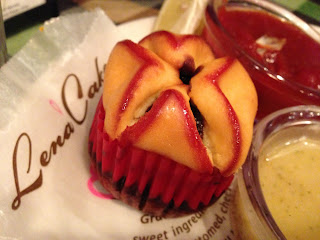 This is an awesome little dessert that is included in a lot of the entrees at Leona's.  The Lena cake is a chocolate cake base that has some kind of fruit or jam filling and is finished off with a cheesecake-like topping.  It reminds me exactly of those cheesecake brownies you can bake from a box.  I did find the cake portion to be a little on the drier side but the cheesecake topping made up for it.  The filling I thought was raspberry but I may be mistaken.  No need to order any other dessert. 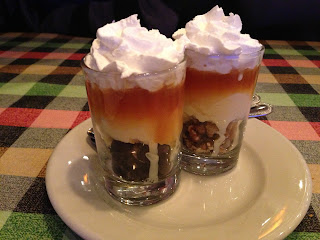 For $2.00, you can get a mini ice cream sundae with two ingredients.  We ordered two different ones... one with caramel sauce & oreos and the other with caramel sauce & walnuts.  Each had Leona's vanilla ice cream and was topped with whipped cream.  We were a little disappointed that no cherries topped our ice cream, but didn't realize it until after eating half of the dessert.  It is the size of triple-shot glasses, so definitely enough to share if you just want a bite or two.

The DOs/DON'Ts:
DO:
- Free Parking Lot behind the restaurant.  You have to go south on Loomis and go west on the first side street.  The parking lot is clearly marked and is fairly good sized.  Just remember your car plate and color for when you enter the restaurant... and write it on the sheet to prevent towing.
- CHICKEN TENDERS... best meal and deal at this restaurant!
- The $2.00 dessert ice cream is a great deal.

DON'T:
- Don't get the pizza.  It is very generic--almost like a frozen pizza.