A Quick Word:
Dragonfly Mandarin is one of not many Asian restaurants on Randolph Street.  After arriving to the nearly empty restaurant, we were seated quickly and given these two tablets (see picture below) which allowed you to order your meals, play games (at a cost), and see pictures of some of the entrees.  It was an interesting technology application, but I thought it was more distracting than useful.  My parents received a coupon that gave us an appetizer, a sushi roll, and an entree plus two drinks.  I was so happy that we had a coupon because the food was absolutely awful.  All of the seafood dishes were not fresh and had a fishy flavor.  The rice was overcooked and crunchy.  And, the descriptions of their items were misleading.  The restaurant was very dark and not very welcoming.  The prices were steep especially for poor quality Chinese food.  I am so glad we had a coupon, otherwise I don't think we would have ever came here.  Do not eat here... just head to Chinatown for a better meal at a third of the cost.

What We Ate:
(Sorry for the blurry pictures.  I had to brighten them because I don't like using flash in dark restaurants.) 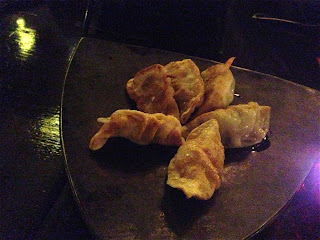 Everyone loves pot stickers and the Koo-Teigh dish at dragonfly is a fancy name for pot stickers.  Our coupon covered one of their appetizers so we chose these pork and vegetable dumplings.  The dumplings were first steamed and then pan fried on one side to give it that crunchy and chewier outer shell.  It is served with both a soy ginger sauce and a chili sauce.  The pot stickers were nothing unique.  They were better when using the soy ginger sauce. 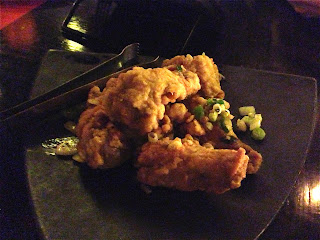 The salt and pepper wings at Dragonfly were actually pretty good.  They were fairly large wings that were quickly fried making them real crispy.  There was a mixed pepper garnish.  Unfortunately, the wings were not uniform with some being much bloodier than others.  Good flavors, but only an OK execution. 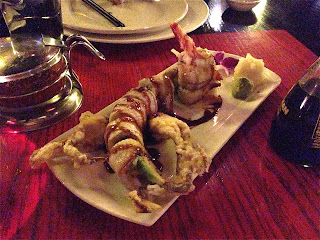 The scorpion roll was part of the coupon as well. It was one of their signature maki rolls that was filled with shrimp tempura, soft shell crab, avocado, cucumber, and a spicy mayo.  The entire roll was then topped with unagi and was shaped into a scorpion looking roll.  The presentation was creative with the claws of the scorpion being the claws of the soft shell grab and the stinger being the tail of the tempura shrimp.  But, the presentation couldn't hide the fishy flavor that was present.  It didn't seem fresh at all which began the trend that followed the rest of the seafood dishes we ordered. 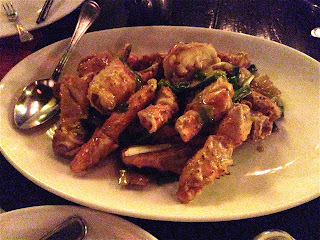 This was awful.  First of all, the crab was not fresh at all and the meat inside the crab legs was basically non-existent.  It was cooked in a garlic, ginger, and scallion sauce with plenty of cornstarch to coat the shells.  The description does say "shelled" which was misleading because the shells are still present and for some reason soggy.  I think they weren't cooked at a hot enough temperature which made the shells soggier and almost impossible to break.  Do not order this dish.  Luckily it was the coupon entree we chose. 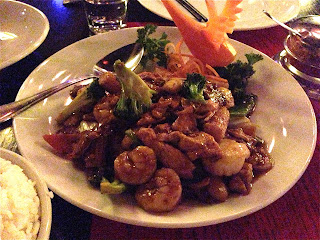 Another dish with seafood and another disappointment.  The happy family is a combination of "king prawns", scallops, steak, chicken, crab claws, and chinese vegetables in a brown sauce.  Most of this description however is false.  It is hilarious when a restaurant claims a dish has king prawns and the dish comes out with the smallest shrimp I have seen in a while.  You could tell they were frozen at some point.  Then the dish states crab claws which I think we had one that was probably left over from the crab dish we ordered.  And then they describe the dish with steak, which was basically some cut of beef chopped thin to be nearly non-existent.  The chinese vegetables included broccoli, carrots, and undercooked baby corn (what is chinese about that?).  Anyway, it comes with either white rice or brown rice which was crunchy due to being overcooked or sitting in the rice cooker for hours. 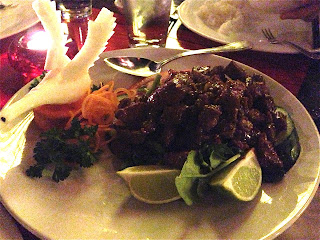 After originally ordering the Mongolian steak, our waiter mentioned this dish and how he thought it was better.  We decided to take his recommendation.  The Bo Luc Lac is a flank steak that is cut into small cubes and served with watercress and a light citrus dressing.  The steak was somewhat tender, but you really need to squeeze the additional limes over the dish to gain the citrus flavor intended. 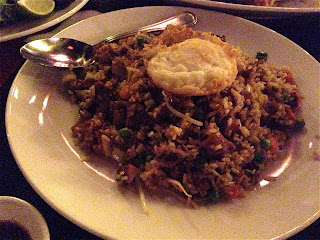 This was the best dish of the night (but that isn't really saying much for how awful or average some of the other dishes were).  The fried rice had plenty of duck pieces chopped into small cubes.  It had the typical fried rice vegetables and was topped with a fried egg.  Cooking the rice this way at least eliminated the crunchiness from the overcooked white rice that came with the rest of the dishes. 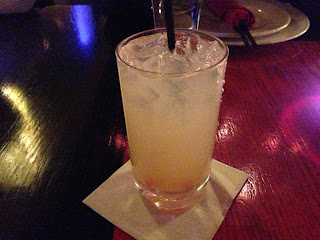 Also covered by the coupon, this drink was a guava rum mixed with guava juice, pineapple juice, lime juice, and mixed with a few chunks of some kind of fruit.  The alcohol content seemed very minimal and the guava juice was the only flavor actually tasted.  The chunks of fruit at the bottom had an interesting chewy consistency.

The DOs/DON'Ts:
DO:
- The fried rice is the best option here... so if you decide to come, don't miss out on it.
- Valet parking is available for $12.
- The ordering system is neat.  You can use these tablet style computers to not only order, but look at most of the dishes before ordering.

DON'T:
- Don't order seafood here.  It is not fresh and definitely not worth the price.

Posted by Joseph Esparaz at 4:25 PM