A Quick Word:
This was one of the first food trucks I tried in Chicago... and it was memorable from the start.  The crew onboard the SamichBox are super friendly... and just getting to know them has been amazing.  They focus on what I call "anything and everything put between two pieces of bread!" Be sure to checkout my future posts from them ... as you will see I have visited and will be visiting Samich Box many more times! 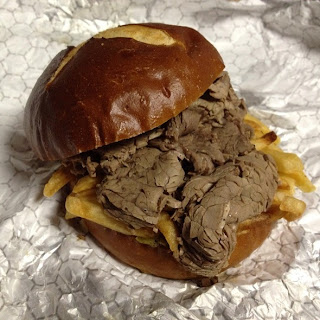 Where to start... It has thick cut roast beef (like the kind you get from a high class carving station), french fries, a jalapeño-onion relish, and served with a side of beer cheese sauce (not pictured).  All of this is placed on a huge pretzel roll.  The roast beef was extremely moist and trust me.. it was a generous handful they put on this samich!  Roast beef was falling out of the samich when I opened it up.  The jalapeño onion relish gives it that nice subtle kick and acidity to break up the fries.  Surprisingly the french fries still had a little crisp to them! 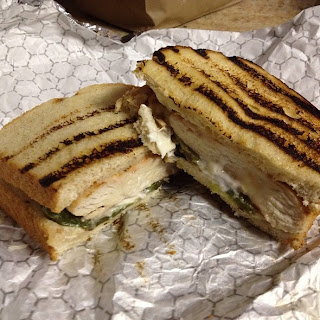 This masterpiece is for the person that likes a little more of a spice to their samiches!  I sure do, and the fresh sliced jalapeños did the trick!  This samich is served on toasted sourdough bread and has a butterflied chicken breast, monterey jack cheese, jalapeños, and a cream cheese spread.  Sounds too cheesy?  Well it is not.  It is a perfect blend.  In fact, it reminded me of a Jalapeño popper (jalapeños stuffed with cream cheese) on top of a wonderfully seasoned chicken breast.  The bread wasn't as crisp as I would like it, but definitely a great samich! 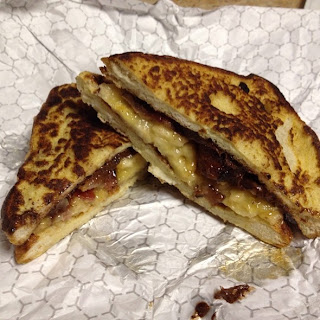 WOW.  This may have taken over as my favorite samich.  It is a sliced banana, nutella, and MAPLE BROWN SUGAR BACON samich served in between two huge pieces of Cinnamon Texas French Toast.  The bacon got me hooked instantly!  Just imagine the sweet and salty combination.  It is honestly to die for!  The bacon had a nice crisp to it.  The french toast wasn't too sweet which was perfect because of the generous helping of nutella spread they used and the thick slices of bananas!  I hope this make this into a regular menu item because people will go crazy for it! 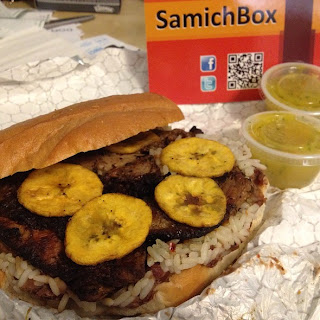 Ahh.. My first samich... spicy grilled jerk chicken, mashed red beans, coconut rice, and crispy plantain chips!  I still remember biting into this samich and instantly being hooked.  I tried finding them the next day and was sad when they were far from my usual spot.  So I tweeted them and what happened? This Amazing food truck put my spot back on their schedule for the following day.  I needed more of their samiches and couldn't wait to get them all... now look below and see everything I've tried! 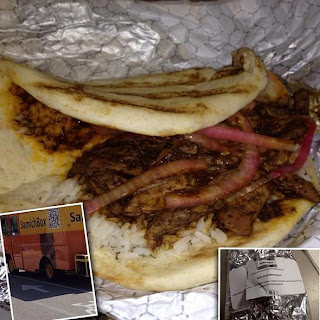 This time it was a grilled flatbread being the perfect vessel for the braised duck in a spicy mole sauce, the cilantro-lime white rice, and the pickled red onions. Those onions gave a nice acidity to the Samich! I do wish it was a little spicier... so maybe ill ask for some of their jalapeño slaw that they carry on board.  Once again Duck? on a food truck? AMAZING guys AMAZING! 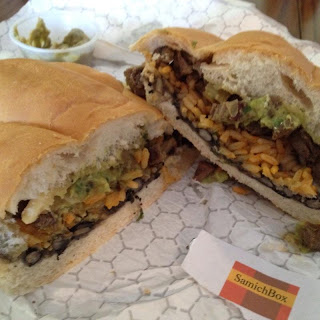 Tequila line marinated steak with mashed black beans, Mexican rice, caramelized onions, guac, and chihuahua cheese! I have been telling my friends to try this place and everyone loves getting this Samich.  They always rave about it and ask when they are coming back... This is definitely a safe bet if you are worried you won't like one of their options. 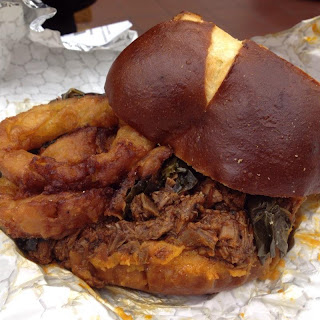 An absolutely huge samich!!!! A nice pretzel roll stacked high with braised short ribs, collard greens cooked in bacon or ham, sweet mashed potatoes, and to top it off... A couple fried onion rings. The sweetness from the sweet potato definitely pulled everything together... Nice touch!  This may be one of my all time favorite samiches.  I bought it for a friend and had to steal a few bites from her! 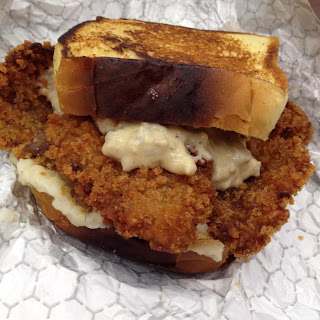 God I love this Food TrucK!  This one was a chicken fried steak with garlic mashed potatoes covered in sausage gravy and served on Texas toast.  Imagine eating that classic chicken fried steak dinner on-the-go... and having it be better than those diners you frequent.  It is that good! I swear people in Chicago... If you haven't tried this truck... It's worth a 5 mile journey just to get it!!!! 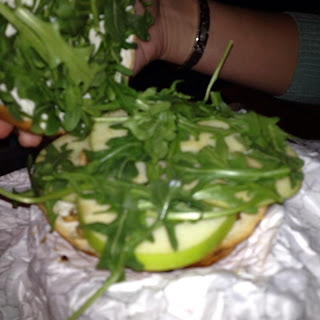 A great vegetarian option! It had green apples, goat cheese, sliced dates, walnuts and baby arugula. The bread was a soft, onion roll which was extremely flavorful. I will be honest... after eating this samich, I tried mimicking it at home... Couldn't come close to what Samich Box did!  It is amazing.  The meat samiches are my favorite but you can't go wrong with this creation! 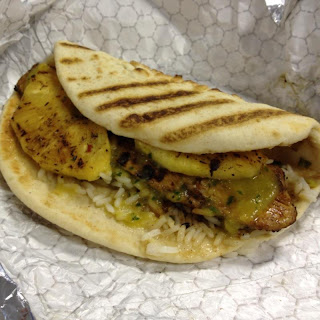 Jerk seasoned tilapia with coconut rice, grilled pineapple, and a mango jalapeño salsa! All of this goodness was served on a naan-like flat bread. Absolutely delicious guys! Make sure to ask them for the mango jalapeño salsa... its a little on the spicy side but makes a huge difference! 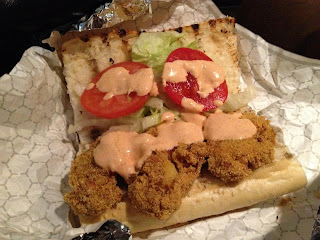 Samich box strikes again! Huge oysters, fresh veggies, and a killer spicy sauce to go along with it.  Who would have ever thought a food truck would roll out with Fried Oysters... and have the still be crispy when I was eating them.  They can pull off anything! 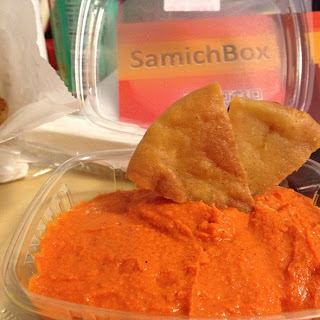 Hummus was very flavorful... And the homemade pita chips were to die for.  I can't believe they made their own pita chips. This chips can't compare to those store bought things.

DO:
- Follow them on Twitter because that is the best way to find them (@SamichBox)
- Do TRY ALL THEIR SAMICHES... You will never be disappointed
- COME EARLY... they are popular so getting your first choice may be difficult at times!