Another one of Chicago's Food Trucks.  When I found them, they were over at the UIC area which was convenient for me.  They serve solid Italian food ranging from pizzas to calzones and surprisingly arancini!  Overall it was too greasy for me... but the flavors were definitely there.  I wouldn't be running to this food truck anytime soon.  I also did find that they weren't as friendly as the other trucks I have encountered and therefore I gave them a lower rating.  And I know its kind of random and maybe not important... but their generator is way to noisy. 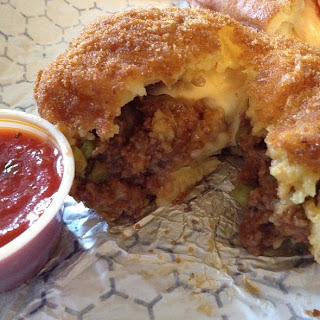 A rice ball stuffed with ground beef, marinara, mozzarella cheese, and peas...then it's covered with bread crumbs and deep fried.  This is one of the better items on their menu!  I was surprised a food truck would carry them especially because you want the outside to remain crisp.  It was as crispy as it could be for being wrapped in foil for couple hours... but it was too oily for my liking. But definitely worth trying if you have never had an aracini. 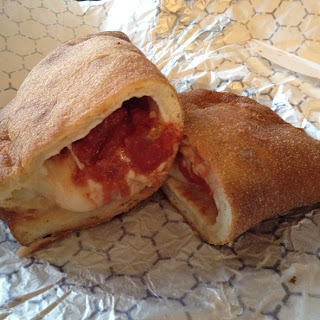 This was a huge panzarotti with tons of mozzarella cheese and a tangy tomato sauce. It is extremely filling but I don't know if that is from eating too much grease or it actually being a big meal. I did wish they had the vegetable panzarotti when I was at the truck. I also wished the crust was not as thick as they made it.  Its almost too doughy and not enough crispy to it.

DON'T:
- Don't be running to try this place... its ok but nothing special.
- Don't be coming here if you are on a diet or trying to cut back on cholesterol (like I should be).  It doesn't serve those people to well.