A Quick Word:
Chicago's Schnitzel King is a great food truck to stop by for a bite to eat.  They may have one of the coolest looking trucks and they also make some killer schnitzel.   One problem is the soggy aspect of both the bread and the schnitzel itself.  But it is difficult to complain when they can't cook on their trucks and they bring you the food.  I enjoy this truck so definitely try to hunt down this food truck on your lunch break! 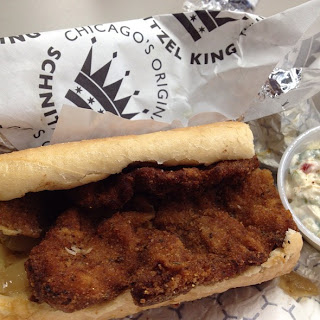 The schnitzel with peppers and onions was delicious!! The key was adding their homemade brown spicy mustard.  It gave it that nice little bite that you are looking for in a sandwich.  The schnitzel was a soggy because of being wrapped which made it a little less pleasing to eat. I do wish it was a little bigger so I didn't need an extra sides to be full... but they do make good potato salad and the little cup of it definitely breaks up the meal. 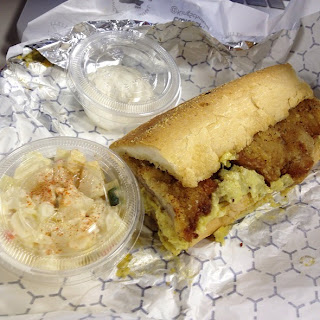 This schnitzel is topped with some well spiced eggs and the typical schnitzel.  Once again the key to making this sandwich was one of their homemade condiments... This time it was a horseradish whip.  It was heavy on the horseradish so make sure you like it before you cover your sandwich in it... I wish I had another one to be honest. Good job guys! 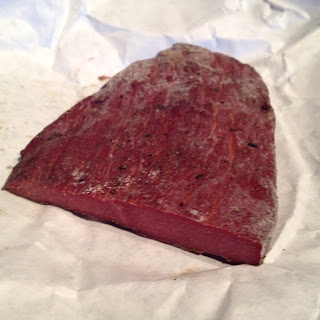 That beef jerky is incrediblel! Nice deep pepper flavor throughout. And it was tender yet jerky still.... And if that wasnt enough... Just look at the slab of meat. Nice thick cut! People were wondering is that brisket and when I said jerky, they all wanted to get some too!

DO:
- Follow them on Twitter... it is the best way to find their truck.  @KingSchnitzel
- Make sure you ask them for some of their condiments! The sandwiches and your appetite will thank you!

DON'T:
- Don't forget to ask if they have jerky on board... its a special so they may run out.