A Quick Word:
After running a few errands in the UIC area, I mistakenly walked into Sofia's Pizza.  Constantly advertising about their cheap $6.00 large cheese pizza, I figured it would at least be average pizza.  But as I previously mentioned, I made a mistake with this choice.  The pizza by the slice is a little more costly than pre-ordering.  And, hopefully 10x worse... because it was not good.  The pizza tasted old with hard cheese, tough crust, and not much flavor.  I honestly hope their freshly ordered pizzas are better otherwise I wonder how these places survive.  The place was empty except for one person quickly eating a couple of slices near the window.  It was just after noon and it was obvious, the lunch crowd doesn't flock here.  I know I won't be back and I do not recommend trying it either.  1-mile rating was given generously. 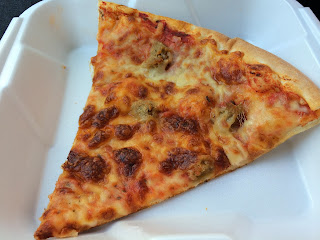 After checking out the pizza by the slice warmer, I decided on ordering sausage.  I mean, it was the same cost as cheese, but had meat on it.  The sausage slice was typical... thinner style crust, plenty of cheese, and a few sausage pieces to finish it off.  At $2.50, it was a pretty solid deal.  Unfortunately, that is where the positives ended.  The cheese had been hardened by sitting underneath that warmer for so long.  The crust was bland, and very tough.  And, there was literally three small sausage pieces on the entire slice.  Not even crushed red pepper helped this slice.  Some of the worst pizza I have had in a while.

The DOs/DON'Ts:
DO:
- If you are going to eat here, do order a full pizza for $6.00.  Hopefully the pizza is much better when fresh.

DON'T:
- Keep walking.  Don't stop in for a slice.  Taylor Made Pizza is a couple blocks further west on Taylor and significantly better (even though it is just average).

Posted by Joseph Esparaz at 8:29 PM