A Quick Word:
When it comes to Chinatown, I find it to veer away from my family's favorite restaurant.  I always think, "Why should I settle for anything less than the best?".  But this visit, we decided to hit up the late night spot, MingHin.  This restaurant is located in the newer strip mall section of Chinatown and appears much more contemporary than the other restaurants.  They have nice tables and chairs with a very sleek design.  When it came to the food, they had some dishes that were excellent and some that were disappointing.  I absolutely loved the fish congee, but their fish maw soup was a cheap imitation of what fish maw soup should be.  The service at night was below average.  For all of these reasons, I thought an average rating of 3.5 miles was fair. 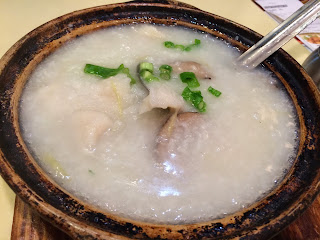 Having eaten congee a countless number of times, I couldn't believe I never had fish fillet congee.  This "asian porridge" is made with rice cooked down and sometimes ground which is cooked in a chicken stock and then plenty of ginger, mushrooms, and scallions are added.  We ordered the small, which was easily enough for 4 people to have a bowl.  They are very generous with the fish fillets which I thought were sole.  The congee is very filling, so make sure you do not fill up too fast on it. 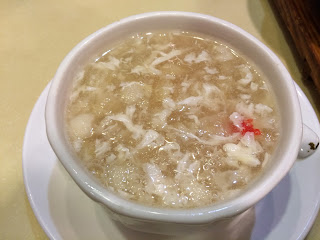 Ever since I tried fish maw soup at Go 4 Food (also in Chinatown), I have had a strange craving for this soup.  Just like at Go 4 Food, the soup is cooked with king crab meat, a seafood broth, egg whites, and of course, the fish maw or swim bladder.  We again ordered the small soup, which was smaller than the congee, but easily enough for two.  Unfortunately, this dish reminds me more of egg drop soup than a fish maw soup.  They say king crab, but honestly, I didn't see or taste any crab except for that red speck you can see in the picture.  It was extremely bland, even lacking salt.  Not worth the price at MingHin.  Give it a try elsewhere. 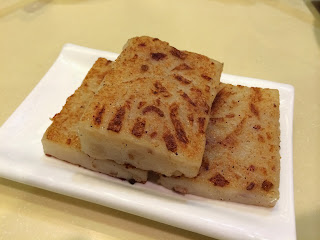 When looking at a dim sum menu, it is always a toss up between ordering the taro root cake and the turnip cake.  In our case, we chose the turnip cake, which was browned nicely on the edges, yet soft in the middle.  We asked for the hot chili oil and hoisin sauce to add to it.  The flavor of turnip is hard to explain, and honestly, I taste more of whatever sauce you dip it into.  I suggest a little hoisin and a nice dip into the chili oil.  The texture is like a drier potato, so it has that paste like consistency on first bite.  Everyone usually likes the dish.  It was good here, but not memorable whatsoever. 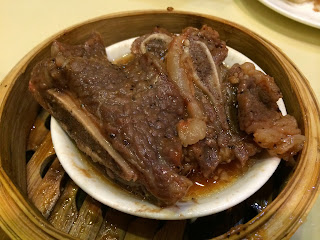 Another classic dim sum dish is the short ribs.  Their version is cooked with a sweeter black pepper sauce and cooked under somewhat tender.  There is enough chew to make you work for your bite, but it still comes off the bone pretty easily.  This dish was just enough for two people so order a couple if you have more. 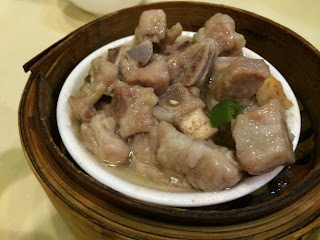 We accidentally marked the spare ribs and thinking we had too much food, changed our minds.  However, the waiter didn't understand our corrected choices and it was brought to our table.  The dim sum dish is made with chunks of pork spare ribs and taro root.  It was cooked with a lot of oil, making it sort of slimy.  There was also plenty of fat and cartilage on the pieces of the ribs.  The black bean sauce was not very prevalent, and I thought it lacked flavor.  Not the best choice, but not awful either. 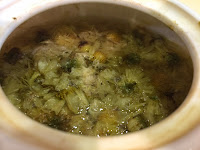 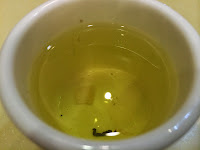 I always thought I was a Chinatown junkie... knowing all the little secrets at each of the restaurants.  Unfortunately, the language barrier doesn't allow for that.  My friend asked for this flower tea which I don't even know the actual name for.  Rather than typical jasmine or green tea, this one has a ton of floral elements with a sweeter aftertaste.  Add some of the cane sugar and enjoy.

The DOs/DON'Ts:
DO:
- Great late night option.  After a night of drinking, do check this place out for a good meal.

DON'T:
- Don't put this place too high on your list.  It is average for most of their dim sum dishes and other restaurants like Cai and Phoenix House are much better for dim sum.