For my final post about the New Orleans food scene,
I decided to group the restaurants as LUNCH TIME EATS.
I always like trying more random or "dive"-style restaurants for lunch.

This post will even include some of the NOLA food trucks. 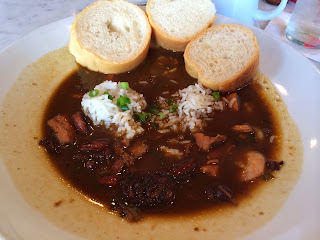 One of the residents recommended Stanley and said people consider it to have some of the best gumbo around New Orleans (most likely referring to touristy/mainstream restaurants).  Having Sunday off, I came at brunch, which was a poor decision on my part.  There were easily 50 people ahead of me and the bar area was part of those waiting list seats.  Luckily, it was just me, and I was willing to sit at a small corner stool at the bar.  I stuck with the gumbo and was happy I did.  Their gumbo has shrimp, oysters, andouille sausage, and chicken along with the other fixings like rice and cajun seasonings.  It is served with a few slices of french bread to help soak up the soup.  It may have been a mistake having my first bowl of gumbo here.  The bar was set high for how delicious it was, making all other places taste just ehh.  Stanley's gumbo had amazing creole flavors with enough spice and warmth of the soup to make you sweat, but it didn't make your entire mouth unbearable.  The large is plenty of brunch time and doesn't dig too deep into your pockets.  I wish I had time to come back and try other menu items, but with so many restaurants in NOLA, I didn't make it back. 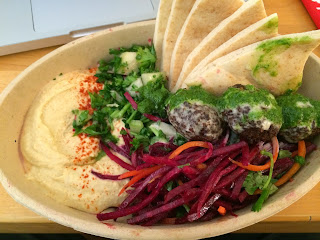 After several misses trying to eat at the famous NOLA food truck, Taceaux Loceaux, I ended up settling on The Fat Falafel food truck.  I wasn't used to the cooking on the trucks, since Chicago doesn't allow it, so the wait seemed long.  After about ten minutes of waiting, I received my falafel platter.  This platter included three falafels, hummus, root slaw, tabbouleh, pita bread, and their sauces poured right on top.  So why was I disappointed?  First of all, the root slaw was not good.  It had a strong bitter flavor which couldn't be masked by anything in that platter.  The falafel itself was pretty good, but I would expect more than 3 smaller-than-average falafels at the price range I paid.  The hummus was creamy and pita was nicely warmed.  They do pay attention to the small details like plating.  I would probably stay away from the platter and try their fat sandwich (topped with fries) if I ever decide to try it again. 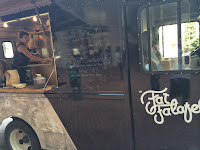 The truck you are looking for is black with huge white letters.  You can follow them on twitter to find their location.  It was near Tulane Medical Center for several lunches a week. 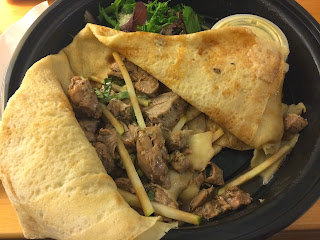 Another last minute stop before flying back to Chicago was Merchant.  I walked by this coffee shop several times a week, but never went inside until it was recommended by one of the other students on my team.  I walked in to find a French-inspired coffee shop with several baristas and a crepe and croque baton making section.  I decided to have the duck confit crepe which was filled with duck, apples, blue cheese, basil, and a balsamic reduction.  It sounded great and started off amazing with a freshly made crepe.  However, it was all downhill from there.  First of all, the lady making the crepe spilled a huge portion of the filling on the side and before adding it back into the crepe looked around suspiciously.  I didn't say anything because I was already running really late (and I am not too worried about germs).  Second, the duck was tough... for being confit, that is pretty difficult.  And finally, the crepe itself had no flavor.  It was thicker than usual and reminded me more of a tortilla.  I like places where the crepe can stand alone. 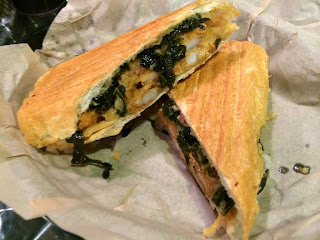 It was team lunch time and we all decided to eat at The Store.  It was my first visit to this restaurant so I wasn't sure what to expect.  I heard they were a sandwich/soup/salad restaurant, but once you walk in, the packed restaurant makes you realize they are more than just that.  It was a hard decision, but I chose the Fried Shrimp 'n' Greens Po' Boy.  This po' boy was filled with crispy fried shrimp smothered in their house-made BBQ sauce and bacon stewed collard greens.  They use a classic french bread, which is pressed in a panini maker.  This sandwich cost $10 with the other options in a similar price range.  Personally, that was expensive for the size of sandwich I received.  I have had huge po' boys in NOLA costing half the cost.  So I would consider more of a gourmet sandwich/po' boy shop.  They did give plenty of shrimp with a nice seafood and bacon flavor being the star of the sandwich.  Also, the bread had the perfect crunch to it.  I think a sharp horseradish mustard would make the sandwich that much better.  I will say I was disappointed with their hours.  I came back another day to find they are only open for breakfast and lunch.  I came back even another time on a weekend to find they are closed.  I understand being located in the central business district that hours are more random.  I guess I should have done more research. 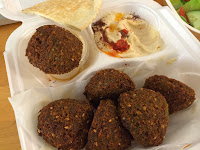 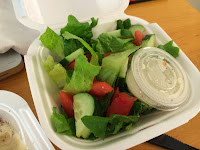 This may be one of the more surprising restaurants I stumbled across in New Orleans.  I guess since I walked everywhere, I tended to look into all the restaurants on my daily routes.  When I first saw Cleo's I thought it was just a typical convenience store.  But on the weekends, I always saw at least 8-10 customers enjoying a large meal inside.  So I decided to check it out.  I ordered the falafel plate which came with half a dozen huge falafels, a serving of hummus, several piece of pita, and a salad.  Tahini was also included.  For a convenience store, I was impressed.  The falafel were huge and crispy on the outside, yet soft in the middle.  They were heavily seasoned and using the tahini made them perfect.  The hummus was creamy and topped with olive oil and roasted tomatoes.  So why not a higher rating? The salad was nothing special and the pita bread was half stale.  Also, the service was awful.  You have to pay at the convenience side and then wait for nearly 15 minutes for my to-go order.  I did call in an order for just the falafels and it still took 15 minutes after my 10 minute walk to the restaurant.  Not necessarily a place to come if you are on a time crunch, everyone moves slow.  Plus side is they are open 24/7 meaning LATE NIGHT FOOD! 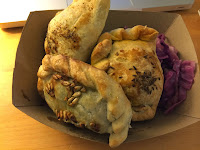 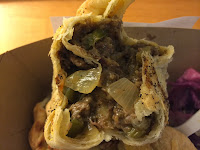 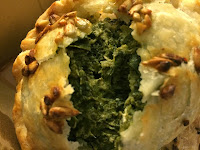 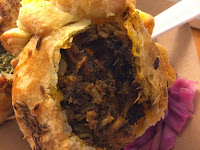 Walking by this bright blue and yellow food truck several times a week, I was finally lured by their enticing menu.  I decided on the Three for $10 option and choose the Mestizo Meat Pie, the Hispanakopita, and the Pibil Pulled Pork.  They do have a rotating menu so empanadas may be different.  I chose the meat pie because NOLA is famous for their meat pies.  It was a fusion between an Argentinian meat pie and the Louisiana version featuring beef, onions, potatoes, olives, and peppers.   The hispanakopita was a twist on the greek spanakopita.  It was filled with spinach, goat cheese, and a tomatilla salsa.  Finally, the pulled pork empanada was not typical BBQ.  Instead, they marinate the pork shoulder with citrus juices and hispanic seasonings before being smoked.  Overall, the empanadas were much larger than the Chicago versions.  The breading was thicker so three empanadas were satisfying for lunch.  My favorite was the hispanakopita but I am a sucker for goat cheese and spinach so that may be an unfair judgement.  The pulled pork didn't have much smoke to it and I prefer a sweeter pulled pork than that citrus flavor.  Would I come back?  Yes for sure... gotta try the rest. 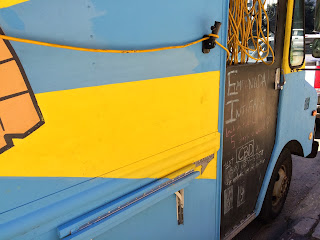 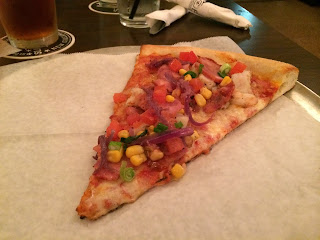 A couple of friends and I stopped by Slice Pizzeria after work.  I personally love restaurants that serve pizza by the slice because it allows me to try more than one type of pie.  At Slice, the speciality pizzas are even included in the slice option which is incredible.  I chose the "Sportsman's Paradise" slice which was a thin crust pizza topped with gulf shrimp, local andouille sausage, corn, peppers, tomatoes, and caramelized onions.  I kind of like to think of it as "gumbo pizza" minus the rice.  Overall, I loved the pizza.  They are generous with the amount of protein on the pie, not skimping on either the shrimp or sausage.  The vegetables compliment each other well with a strong corn flavor prevailing (I was definitely surprised).  The crust could be a little more sturdy to hold up the toppings and the slice itself wasn't huge.  You easily need a couple slices, and at $3.50 to $3.75/slice, the price adds up real quick. 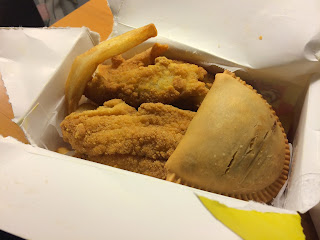 Before I headed home, I was curious for one last stop at Brother's Food Mart.  I frequented the store for bottles of water, grab-n-go drinks, and a few snacks, but never tried their hot food.  And, after I saw a huge group of kids walking away with boxes, I figured I should give it a try.  In order to get the biggest bang for my buck, I chose the variety box which included two pieces of fried fish, two pieces of chicken, and french fries.  I added a meat pie my box and headed home.  Upon first bite, I knew I wouldn't be finishing the box.  Imagine a grease pit with a side of food.  The fish and chicken were both soggy and they left a puddle of oil on top of the fries.  Therefore, the fries became soggy.  The fish appeared to be frozen with some sections freezer burnt.  The chicken no flavor, and that meat pie... the hospital ones are 10x better.  Nothing was appealing about this restaurant and that is why I gave it my lowest rating possible.

Posted by Joseph Esparaz at 4:37 PM