A Quick Word:
Well, it's time for another cupcake review.  After wandering around downtown Chicago and the German Christmas market, we found ourselves in Block 37, one of the "mall" complexes on State Street.  Inside the mall is Magnolia Bakery.  This chain-type bakery has more than just cupcakes.  They sell different types of cakes, tarts, and puddings.  When it comes to their cupcakes, Magnolia has some of the best DECORATED cupcakes I have come across.  They decorate them with seasonal themes, such as Wicked and the Nutcracker.  Unfortunately, the decorations or themed cupcakes doesn't mean they taste good, or shall I say, better.  The cupcake itself is exactly the same as their classic cupcake just about a dollar more in cost, and as I mentioned, better looking.  Because I feel like the decorations are a scam if you are eating the cupcake immediately, I decided to give a 3.5-mile rating.  If I was going to a party or giving it as a gift, then the prettier themed cupcakes are a better option. 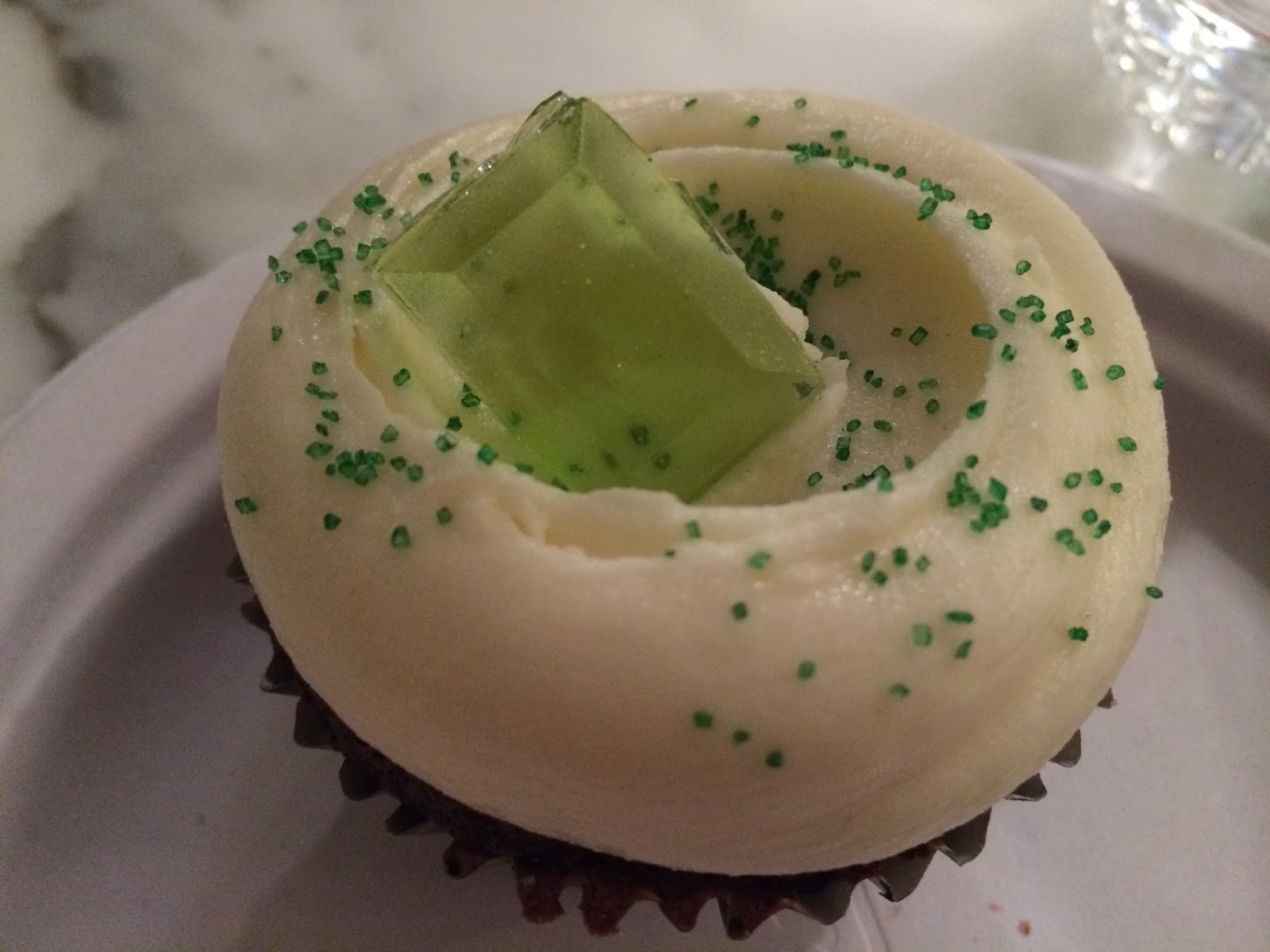 Everyone is drawn into Magnolia Bakery by the smells.  I swear they pump that freshly baked cake smell outside their bakery.  Anyway, we decided to split their Chocolate Classic Cupcake with the Emerald City twist.  Yes, that is a reference to Wicked.  The cupcake was made with a chocolate cake and topped with vanilla buttercream before being decorated with green sugar sprinkles and a decorative emerald.  This themed cupcake was a disappointment... not because the cupcake wasn't good, but because I expected a lot more.  When you pay the extra cost for a Wicked Theme, I assumed the cupcake would also be a little different... maybe filled with a green buttercream?  Nope, you get the simple classic cupcake with a sugar emerald.  And, that emerald was not even flavored.  Just a green sugar block which is next to inedible.  The cupcake was great.  It wasn't the moistest cupcake I have ever eaten, but it was above average.  The cost was appropriate for the size of the cupcake (if you don't pay the extra charge for themed version).

The DOs/DON'Ts:
DO:
- Do try the banana pudding with vanilla wafers.  It reminds you of childhood.

DON'T:
- Don't get suckered into buying the themed versions unless you are giving them for a gift or bringing them to a party.  The decorations are AMAZING, but they cost about a buck more and have no added flavor.  In fact, the decorations taste awful.
- DON'T purchase water bottles.  They have water cups and a huge jug of ice water for their customers.

Posted by Joseph Esparaz at 4:34 PM