A Quick Word:
With the craze of the "cronut" sweeping the country, I was hoping it would reach Chicago sooner rather than later.  After just a few weeks, sooner had arrived.  The West Town Bakery & Diner, along with a couple random doughnut shops in Chicago, had brought the cronut to Chicago and renamed it the "doughssant."  This diner, located in the Ukrainian Village neighborhood, is not limited to just bakery items... in fact, they have a full breakfast menu.  However, I came with one goal in mind, the doughssant, so I will not be commenting/rating their breakfast entrees.  After arriving around 9:30am, I was lucky to see a couple of each of their doughssants remaining.  I assume they sell our frequently, especially with the media attention on this doughnut-croissant hybrid.  The doughssant is everything I imagined.  Buttery, flaky, rich, sweet, heavenly are just a few words can describe this recently invented pastry.  Without question I would walk 4 miles for the doughssant.  With the amount of calories, I know the 4 miles wouldn't hurt.


The Doughssants
(aka Chicago's "Cronut") 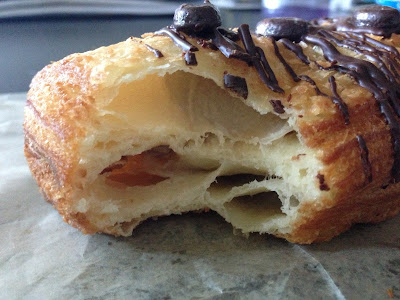 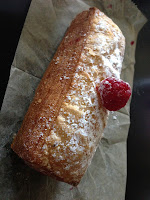 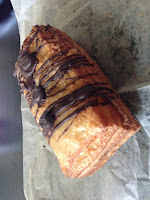 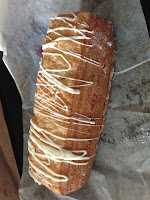 As soon as I heard the "cronut" had reached Chicago, I knew it was time to make a trip to the West Town Bakery.  Their version is called the Doughssant.  And if you couldn't guess... it is a cross between a doughnut and a croissant.  They have three different options (Left to right) -- Chocolate Raspberry, Coffee Cream Cheese, and Blueberry Lavender.  Rather than the typical doughnut ring shape that the original NYC bakery uses, they created a twist on the classic long john doughnut.  These rectangular doughssants are made layer by layer just like a croissant and are extra buttery.  They are then filled with their respective filling.  On first bite, the pastry is much more dense than a typical doughnut, but at the same time is rich and flaky.  The consistency reminds you of a croissant, but the creation/taste is reminiscent of the doughnut.  It literally plays a trick on your mind and taste buds.

They definitely do not skimp on fillings here.  The fruit filling is gooey and sugary.  The lavender flavor is more pronounced than expected, but is excellent.  My favorite was the coffee cream cheese.  They pay extreme attention to detail with small chocolate covered coffee beans sitting on top of the doughssant.

After trying these, I understand the craze.  I mean, who wouldn't want to have a croissant and doughnut... and eat them both too!

The DOs/DON'Ts:
DO:
- Plenty of street parking.  Typical "Pay-at-the-Box" style.

DON'T:
- Unsure... all I did was order pastries, pay, and leave.  So nothing to really complain about.