A Quick Word:
If you are looking for a great patio during a hot summer day, I would highly suggest Prasino.  This restaurant, located in the Wicker Park neighborhood, is a great place for smaller plates, bottles of wine, and wonderful outdoor seating.  The staff is friendly, but not as informative as I would like.  When asking recommendations on wine, the waitress was not only unsure of which bottles they had, but also knew very little about wines except for the price.  It is a little strange when they recommend the most expensive wine for each grape type.  Anyway, after the food arrived, I was pleasantly surprised with both tastes and portion sizes.  I mean, an appetizer and two flatbreads was plenty for two people.  Each dish was beautifully plated, but each dish also had a flaw that was difficult to forget.  And, for that reason, I decided a 3.5 mile rating would be fair.  But still, if it is sunny, and you want to day drink, Prasino is a great place to grab a bite to eat and get your day started. 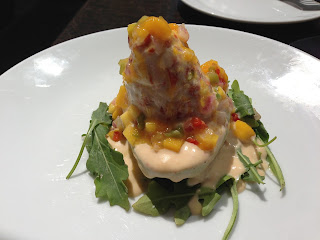 The lobster avocado is Prasino's signature dish.  It is half an avocado that is topped with a generous helping of lobster, a mango salsa, and covered with a chili beurre blanc.  I found out my friend has never had lobster before, so after her first bite, I was interested to see what she thought.  And just like I thought, it was incredible.  The lobster was fresh and added an underlying sweetness that contrasted the chili beurre blanc (which is a white butter sauce).  The avocado added the creaminess and the mango salsa gave a freshness to the dish.  I really enjoyed this appetizer and recommend it to everyone! 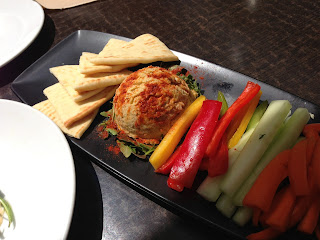 Probably the most simple appetizer on the menu was the hummus.  The hummus is made fresh in house and served with slices of pita bread and a variety of mixed vegetables.  My first impression was awful.  The hummus was extremely dry and flavorless.  After a couple more bites, the dish opened up to me and was actually addicting.  I preferred dipping the carrots into the hummus.  I probably wouldn't order this hummus again, but it wasn't awful. 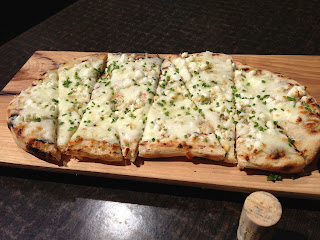 Customers at the neighboring table suggested the farm flatbread, describing it as a pizza that will overwhelm your tastebuds.  The farm flatbread consists of a whole wheat crust topped with a cheese blend, chopped chives, and a truffle honey.  The crust was crisp on the bottom and thick enough to make the flatbread more filling.  The cheese blend was delicious (unfortunately I do not know all the cheeses used).  But the secret is that truffle honey.  The sweetness against the sharp cheeses was an amazing combination that made me crave more and more.  Another dish a highly recommend! 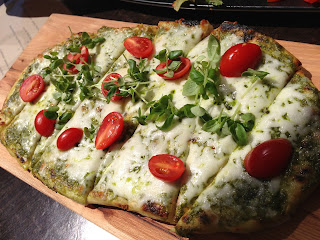 The other flatbread we decided to try was the Margherita.  I mean what else goes well with a bottle of wine and a nice sunny day?  This flatbread had the same whole wheat crust, but was topped with pesto, mozzarella cheese, basil, and halved cherry tomatoes.  I did not like this flatbread at all.  The pesto was too strong or maybe just laid on too thick.  The cheese didn't add anything... I mean, shredded mozzarella?  I wish they used fresh sliced mozzarella.  The tomatoes were sweet, and I enjoyed the nice chunks by just halving the cherry tomatoes.  Spend your money on a different dish. 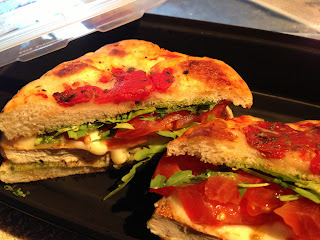 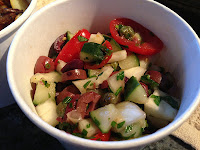 With the leftover balance on my Gilt City voucher, I decided to order a couple of sandwiches "to-go".  The first was the chicken caprese sandwich.  This sandwich was made with tomato basil focaccia and filled with a grilled chicken breast, tomato, arugula, mozzarella, and pesto.  Once again, the main flavor was pesto because they are very heavy handed on the sauce.  I think it would be significantly better if they used half the amount.  The chicken was moist and the other flavors were good (well, for what I could taste of them).  It comes with a side, which I chose the mini beat salad.  The salad was on the dry side.  A lot of vinegar was at the bottom of the container, but for some reason, the veggies were dry.  I probably wouldn't get this salad again. 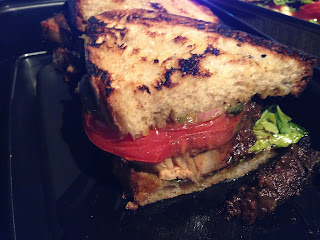 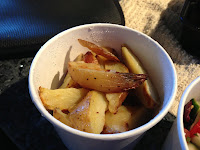 The other sandwich I ordered "to-go" was the Pork Belly BLT.  Now this is a sandwich!  Two thick cut slices of country style bread was generously filled with thick slices of pork belly, arugula, tomato, and a jalapeño gastrique.  They skimped on the guacamole, which was basically absent.  I absolutely loved the flavor of the pork belly.  It seemed to be cooked with balsamic or some kind of sweeter sauce.  The jalapeño gastrique shined!  It added a slight spiciness to the sandwich.  The bread was wood grilled so it had that char flavor to it.  The side I chose for this sandwich was the truffle potatoes.  These were fingerling potatoes that may be tossed in a truffle oil.  I couldn't really get that flavor, but oh well.  Dip them in ketchup and move on.  I just really don't like their sides. 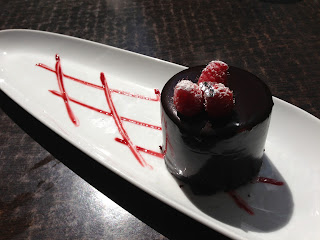 For dessert, the chocolate mousse cake was the no-brainer.  The mousse cake was lightly coated in a solid chocolate shell.  It was drizzled with a little raspberry sauce and topped with fresh raspberries.  That combination is one of my favorites so I loved it.  It was extremely rich, so sharing is a must.

The DOs/DON'Ts:
DO:
- Do look for Groupon or Gilt City deals.  We found an incredible Gilt City deal which cut our bill essentially in half and included a bottle of wine!
- Do sit outside.  The patio is incredible.  It has a private feel for being in the middle of a side walk.

DON'T:
- The sides are not worth ordering.  In fact, they are pretty awful.
- Don't miss out on the Lobster Avocado.  It is that good!

Posted by Joseph Esparaz at 6:53 AM