A Quick Word:
Whenever I am out near the Oak Lawn area, I find it hard to locate mainstream restaurants.  Dive restaurants are much easier to come by.  Unfortunately, with dives, there is a huge variety of what you will stumble across.  Rito's Coffee, which is a few miles from Advocate Christ Hospital, is an Eastern European inspired restaurant that I recently tried.  Upon first entering the restaurant, you are unsure if they actually serve food or just coffee.  The room is very warm and only a few tables are seen.  The kitchen is non-existent... literally.  I don't think they actually cook at the restaurant.  It looked like a huge prep station with a microwave oven tucked in the corner.  The food was either hit or miss and when it was a "hit," it was still just average.  It was hard to even give this place a 2 mile rating, but they did have a light purple soup that was extremely refreshing.  I doubt I would ever go back, but if you are in the area... I guess try it rather than settling for Subway. 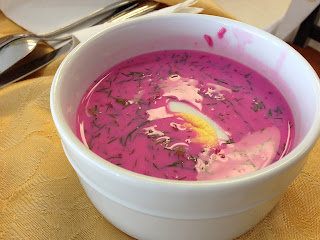 A chilled beet soup was part of my friend's meal.  This interestingly colored soup was actually very tasty and refreshing.  I personally haven't had too many cold soups, but on a hot day, this one would do the trick.  The soup is simple--plenty of macerated beets that are strained and topped with a slice of hardboiled egg and a generous amount of dill.  It comes out a beautiful purple color that doesn't seem appetizing, but after tasting, your spoon will keep going back for more.  It was very fresh and had a little bitterness to it.  I would get this again... maybe with one of their salads for lunch! 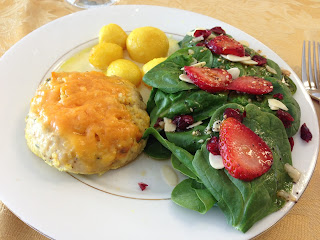 For my lunch entree, I decided on the chicken bake with quinoa.  This meatloaf-like patty is made with ground chicken, quinoa, diced veggies, and is topped with cheddar cheese.  It is served with a spinach salad that has sliced strawberries, slivered almonds, and dried cranberries.  A light raspberry vinaigrette dresses the salad.  Upon first bite of the chicken bake, you realize that is is pre-made and simply warmed in the back kitchen.  It was on the dry and season-less side of the meatloaf spectrum.  The cheddar cheese on top adds absolutely nothing.  The main flavor is chicken and a nutty flavor from the quinoa is appreciated.  The salad was the better part of the dish.  But, how can you really mess up a sweet, fruity salad.  The stewed potatoes had very minimal flavor.  If somehow I ended up at this restaurant again, I would probably just order a salad. 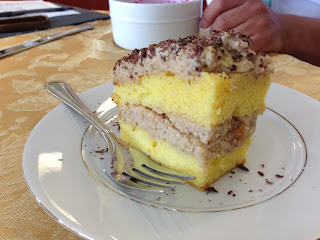 The homemade coffee cake is a special of the owner's wife.  It isn't on the menu, so you have to ask to see if she has a slice available.  This yellow cake has an incredible praline and coffee icing.  It is topped with shaved chocolate and a little coffee.  The dessert isn't too sweet, but you still get that satisfying chocolate flavor.  The cake was soft and fluffy.  I couldn't really complain , except the cost was a little high for such a small slice. 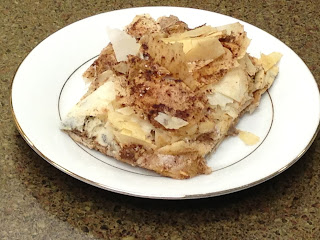 After seeing this interestingly looking dessert, I asked the owner what it actually was.  He told me it was their version of baklava, just not as sweet.  I am a sucker for a good baklava so I bought a piece for home.  After my first bite, I was DISAPPOINTED.  This dessert was AWFUL.  The phyllo dough sheets were undercooked and tasteless.  In fact, biting into this dessert was like biting into thin sheets of tasteless paste.  I swear there was no sugar added.  I can't believe they actually sell this stuff... or maybe they don't since the display was still full of this poor-excuse of a pastry. Do not order!

The DOs/DON'Ts:
DO:
- Do try their beet soup and salads.  I think these simple items are the better options at their restaurant.
- Do support this "mom and pop" cafe.  It is better than Subway next door, but a little on the pricier side.

DON'T:
- I wouldn't try all their desserts.  And DO NOT try their "baklava".  It is awful.

Posted by Joseph Esparaz at 7:09 AM