A Quick Word:
Bistronomic tries and succeeds in bringing a cheaper, yet high quality French restaurant to the city.  They offer different sized plates--some that are appetizer-sized, some for sharing, and some for eating on your own.  Right when walking into the restaurant, the atmosphere feels like home.  Chalkboard specials are seen above the bar and the waitresses with French accents roam the floors.  We came on a Friday night and the place was full.  The food is authentic French and reminds me of restaurants in Paris.  I was impressed with everything I ate and enjoyed the restaurant atmosphere.  Bistronomic may have taken over as my favorite "fairly reasonably priced" restaurants in the city.  I will recommend it to everyone.  The only reason it didn't get a perfect rating was because of the disappointing dessert (it tasted great... but you will see if you read below).

UPDATE:  BRUNCH 2013
I believe Bistronomic is one of Chicago's hidden gems for brunch.  This restaurant is almost impossible to get into on weekends for dinner, but there is plenty of room for brunch... even without reservations.  The staff is extremely friendly, especially since the lack of crowd gives each table more attention.  The menu is extensive with french classics--crepes to sandwiches.  And just remember, don't forget to order dessert! 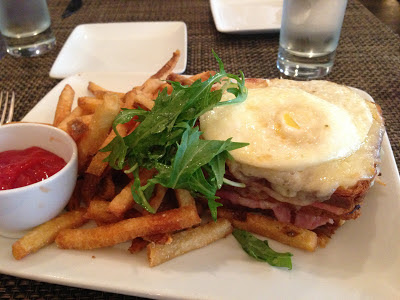 I went ahead and chose this classic French sandwich.  The croque madame was made with thick cut toast that is egg battered and griddled.  It was filled with Nueske's ham, gruyere cheese, and topped with a fried egg.  The sandwich is triple decker, so it is HUGE!  It was served with a side of french fries and a little arugula for garnish.  The sandwich itself was extremely rich.  A little too much butter and too much cheese for some of my family, but for me... I loved it.  The bread had a nice crispy crust, but was still soft, almost French toast consistency.  The ham was thick cut and plentiful.  I did wish there was a little more freshness... maybe substitute a side salad for the fries. 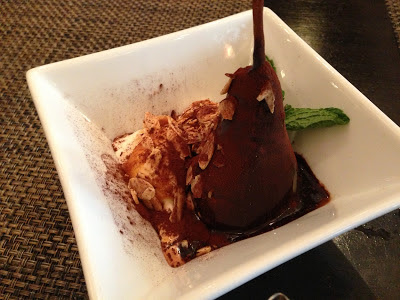 This was one of the most interesting desserts I have had in a while.  A poached pear is chilled and dipped in chocolate.  It is served dusted in cocoa powder, topped with slivered almonds, and accompanied by a scoop of vanilla ice cream.  Upon first impression, I was a little disappointed.  The pear was cold and a little hard to eat--actually very difficult to share.  But after a few bites, i realized the complexity of the dessert.  Plenty of chocolate flavor throughout and an amazing, creamy ice cream.  It was addicting.  My spoon kept going back for more. 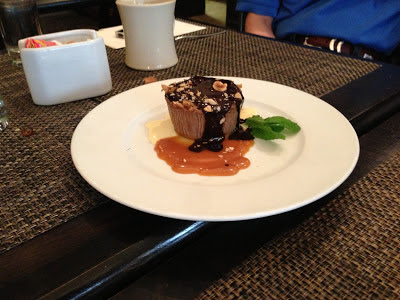 The other dessert we decided to share after brunch was the banana nutella bread pudding.  I mean, who doesn't like this combination?  The simple bread pudding was made with plenty of bananas and topped with a generous helping of nutella.  It also had a vanilla cream sauce and a side of caramel.  This was a little on the TOO SWEET side for some, but once again, my sweet tooth had me hooked.  The dessert was soft and served hot.  I did wish there was a scoop of vanilla ice cream on this one. 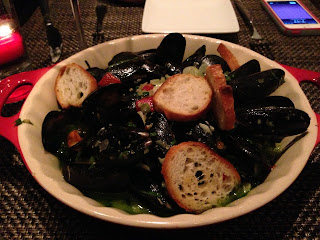 My friend and I decided to start off with a "medium plate" to share as an appetizer.  She also loves mussels so it worked out great.  The dish was different from most restaurants... instead of a typical white wine sauce, bistronomic cooked their mussels in a basil puree (with of course some wine too).  They added toasted baguette slices on top, which were just asking to be dunked into that amazing green sauce.  The overall size of the dish was great.  It could have definitely served as someone's meal if they wanted.  I suggest using the little fork to loosen the mussel from the shell and then slurp it out.  If you are trying to be more "proper" then I guess dunking the mussel into the sauce would also be appropriate.  Don't forget to let those baguette slices soak and soften up... but be aware, the sauce does seem to get saltier as the meal goes on. 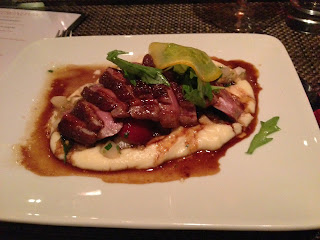 Whenever I dine at French restaurants, I always want to try the duck entree.  And once again, we agreed to share these larger plates, so I was able to try a couple!  The pan roasted duck breast was cooked to a perfect medium rare and then glazed in a plum sherry reduction.  It was served on a bed of mashed potatoes with extra sauce throughout the dish.  It was "unreal."  The duck breast was extremely moist (unlike other places) and tender.  The entire dish actually reminded me of the pan roasted duck breast I enjoyed while staying in Paris. And, just like then, I couldn't get enough of it.  I do suggest getting as much sauce on the duck breast and potatoes all in one bite! 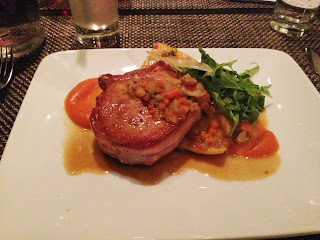 The daily special was a combination of a huge pork chop wrapped in bacon sitting on top of homemade squash ravioli.  And, this dish was incredible.  The pork chop was bone-in, thick cut, and cooked perfectly.  It had some kind of onion and carrot mixture on top and was, of course, made even better with the addition of bacon.  But, even with such amazing flavors in the chop, the squash ravioli was probably my favorite part.  The sad part being it only came with a few raviolis.  Each of them was filled with butternut squash, giving the dish a nice sweetness to it.  The entire dish was covered in a ginger balsamic reduction and garnished with a handful of arugula.  Every part of this dish made me want another bite and then another... 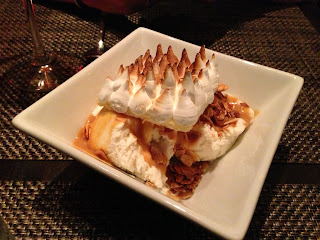 One of my all time favorite desserts is Baked Alaska.  I remember eating it when I was younger... and then searching for years without finding it.  When I found out bistronomic serves it, this restaurant moved to the top of my "upcoming restaurants to eat at" list.  The dish is an ice cream based dessert topped with sponge cake and a meringue that is toasted.  The ice cream doesn't melt because the meringue is burnt real quickly.  Now for the disappointment:  I understand that not all of them are flambéed at table side... but I was disappointed when the baked alaska was not lit on fire at our table.  The meringue was toasted though... but I just had some high hopes for the fire.  Hopefully I can find a place that flambés it. 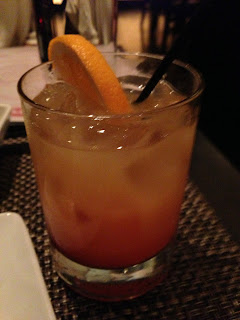 The old fashioned was just another staple cocktail that most restaurants make well.  Here they used templeton rye.  The orange flavor was nice and subtle.  Just a good cocktail to start off the meal. 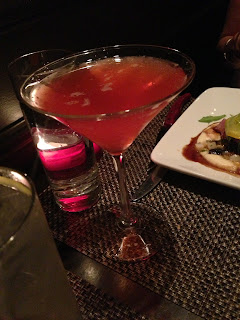 Here is one of their restaurant cocktails.  Campari is a bitter and this drink when mixed together tasted sort of like blood oranges.  It also had St. Germaine and sparkling wine mixed in.  I thought it was a little too bitter and artificially tasting but it was still ok. 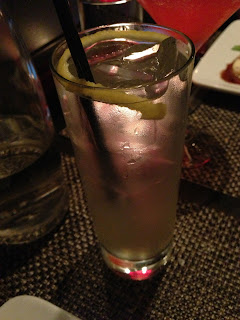 Once again, another cocktail that we decided to try.  We ended up trying one of each, but I forgot to take pictures of them all.  I do not know much about rating cocktails so I guess the ingredients would help.  It had Bombay Sapphire Gin, Lemon Juice, St. Germaine, and Sparkling Wine.

The DOs/DON'Ts:
DO:
- Valet parking cost: $12 for 3 hours... it is pretty reasonable since city street parking is around $4 an hour. (They are a little slow at retrieving cars)
- I suggest skipping the smaller plates and sharing medium plates for appetizers.  I was looking around the restaurant and the medium plates all looked amazing.
- Definitely make reservations. It is a pretty popular restaurant lately.

DON'T:
- Sorry if I mixed up the drinks... so Don't be mad if you order one of the one I mentioned and got a different looking drink.  It gets harder to remember after having a couple.