A Quick Word:
One of my best friends works at Jefferson Tap and she always wanted me to come stop by.  One day, I decided to order take out to give the food a try.  This late night bar and grille located in the West Loop is a little off the beaten path, but both their atmosphere and food draws a sizable crowd.  The staff is extremely friendly and welcoming.  I remember sitting at the bar once being introduced to my friend's co-workers and having a great time.  The food when ordering at the bar is all pretty good, but for some reason, the take out is just a little less appetizing.  I found most of the food to be above average, but the simple garnishes or lack of a decent topping made me think twice about their overall rating.  The portion sizes and cost are excellent, even for a student's budget.  Just ordering a couple appetizers for you and a friend should be enough.  Anyway, because of the lack of memorable food and the small flaws on each dish, I decided to give them a 3.5 mile rating.  It will probably change as I eat more food at the bar rather than ordering take out. 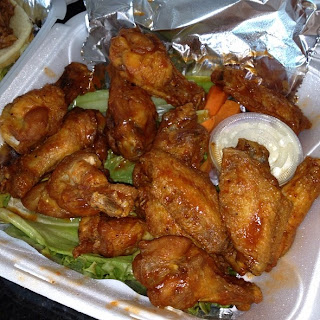 We decided to order a couple appetizers for our meal.  The first one was the buffalo wings.  We chose hot buffalo sauce with a side of blue cheese.  It came with a few carrot sticks... but no celery?  Anyway, the sauce was ok.  Nothing too spicy (which was a little disappointing).  The chicken wings were typical.  However, I don't know if the blue cheese dressing was homemade or from a jar, but regardless, it was incredible.  My friend and I were addicted to this blue cheese dressing.  They did serve the wings on a bed of leafy lettuce, which turned into an unappetizing soggy leaf from the take out box.  Maybe refrain from those pointless garnishes next time... just a suggestion. 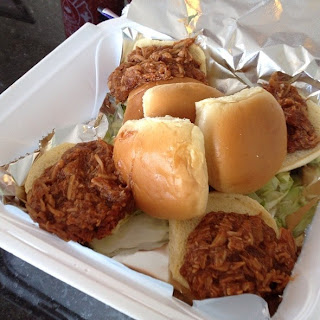 Another one of their appetizers is the pulled pork sliders.  These mini sandwiches are served on sweet hamburger buns and topped with a generous portion of their homemade BBQ pulled pork.  The meat was tender and the BBQ sauce had a nice sweet, yet tangy flavor.  The buns were soft, almost a little too soft to hold all the meat.  They were served on a bed of lettuce, but I think it would have been nice to have a little vinegar based coleslaw or some pickled onions as an accompaniment.  Definitely better than average, but a simple slaw would elevate it to the next level.

The DOs/DON'Ts:
DO:
- Late night bar... I believe it is open till 5AM.
- They also serve brunch on weekends!

DON'T:
- I wouldn't come here if you enjoy being around "in-your-face" fans during big games.  This place is a little more mellow, but still a great atmosphere for watching sports.