A Quick Word:
Three Aces is one of the main neighborhood bars in the UIC area.  With a huge outdoor patio, this bar tends to fill up more on warm, summer nights.  Besides offering a nice, yet smaller selection of beers, Three Aces offers a large variety of both bar snacks and full dinners.  Most of their entrees appear to be bar twists on classic dinners.  For instance, rather than serving your typical buttered popcorn, Three Aces has a gourmet approach using parmesan cheese and a garlic hot sauce.  The service at the bar is just OK... the bartenders rotate frequently so more than one seems to be serving you at all times.  I was extremely disappointed in how long the food took to arrive.  The burger was brought out last and nearly 25 minutes after the pizza.  Luckily, my friend and I were sharing some of the dishes so it wasn't awful. Because of this random service flaw, I decided a 3.5 mile rating was sufficient, if not generous. 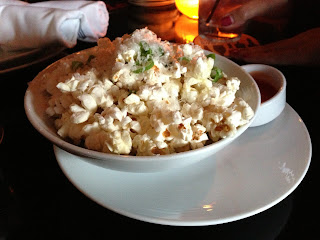 Everyone always says to order the popcorn at Three Aces, and at $2.00, how couldn't you?  Anyway, I would vote against ordering the popcorn.  It is honestly the most bland bar food dish I have had in a while.  The only saving grace was the roasted garlic hot sauce, which tasted good, but made the popcorn either soggy from pouring it over the top or messy if you dipped popcorn into the small dish.  The scallions and parmesan cheese added NOTHING to the popcorn.  Stick with movie popcorn please. 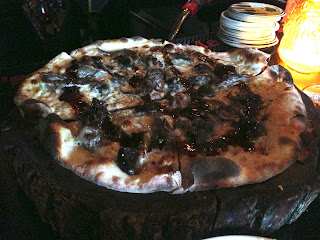 After scanning through the pizzettas (small pizzas), the one that caught my eye was their short rib version.  This Neapolitan style pizza was topped with short rib, mushrooms, a mild blue cheese (not sure how this is possible), and rather than typical tomato sauce, a roasted garlic cream sauce.  A little bit of the beef jus was splashed on for added saltiness.  The pizzettas are served on huge disks of a tree trunk (just see picture to understand).  The crust is not uniformly cooked with some areas more burnt than others.  The blue cheese was a nice compliment to the rest of the ingredients.  I just found the other ingredients to be a little scarce in some areas.  Overall, it was pretty good pizza. 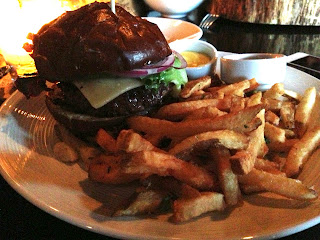 My friend was dead set on ordering the ace burger.  Something I wanted to order, but I knew it was going to be too heavy prior to a night of drinking.  This burger, served on a pretzel roll, was thick cut and topped with aged cheddar cheese, a bacon jam, and garlic pickles.  It came with a side of some rich aioli with no prominent flavor except oil and of course french fries.  The burger was pretty good size.  She preferred to have it cooked medium well, which is way too overdone for me.  The burger did have a good charred flavor and was surprisingly moist for its cooking temperature.  Definitely dip the fries in the aioli.  It is addicting.  Not the best burger in Chicago... but not bad at all. 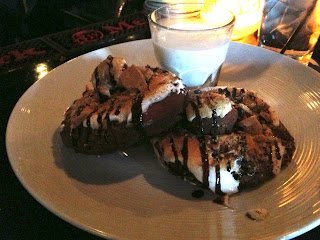 Three Aces has a rotating doughnut selection... this day happened to be S'more Doughnuts.  Each order came with two doughnuts (and their doughnut holes) topped with a white russian fluff, crushed graham crackers and drizzled with chocolate sauce.  A small glass of milk accompanied the dish.  I always love the rotating selection... they even featured a peanut brittle-bacon doughnut in the past.  The s'more doughnut was a little more dense than I like.  It kind of reminded me of an old fashioned cake doughnut in terms of consistency.  The fluff was amazing.  Overall, it was extremely sweet so two huge doughnuts is sort of overkill.  I don't drink milk... but the small glass was definitely a creative touch.

The DOs/DON'Ts:
DO:
- You can make reservations here.  I suggest doing that if you are going on a weekend.
- We sat at the bar which is always a solid option.

DON'T:
- Service is kind of weird... food comes out as it is ready.  Are they trying to share meals?  Don't be alarmed if someone gets their burger 20 minutes after a pizza is delivered.

Posted by Joseph Esparaz at 4:34 PM