A Quick Word:
After many years of dining in Pilsen, I couldn't believe I never tried La Casa Del Pueblo Taqueria.  This not-so-main-stream restaurant serves their food cafeteria style, allowing customers to look at all the meals before they are quickly plated and brought to your table.  Offerings include, but are not limited to their famous tamales, albondigas, stewed chicken, and of course rice/beans.  Dozens of other dishes look tempting, but my I always know my eyes are too big for my stomach.  The atmosphere feels like home, but the ordering is a little confusing at first.  The waitresses were very nice and slowly walked me through each of the dishes.  Because of the huge miss on one of the dishes and the lack of detail on some of the other dishes (see the chile relleno below), I could only warrant giving them a 4 mile rating. 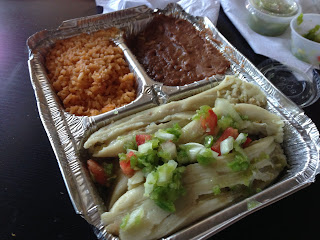 Hearing rave reviews about La Casa Del Pueblo's tamales, I knew I had to order the tamale dinner.  At first I wasn't sure how to order (explained in the DO section below), but after understanding the different options of tamales, I decided on the chicken ones.  The tamales were incredible.  They were extremely moist and had plenty of chicken.  I added a container of the jalapeño salsa to the tamales to give them a spice.  The dish came with rice and beans... which were definitely above par.  The dinner is a huge meal, so either share and order other dishes or get ready for a full stomach!

(Just so you know... they offer other variations of tamales including a poblano and cheese tamale , a pork option, and also a sweet one.) 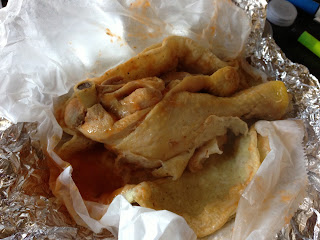 I like to describe this dish by saying... LOOK AT THE PICTURE.  I have never had a taco like this before and now I think it is amazing.  After deciding on ordering a couple of tacos, I saw that one of the options was chicken in a spicy chipotle sauce.  I assumed it would be shredded chicken... but I assumed wrong.  Rather, the taco was made using two corn tortillas and an entire chicken drumstick, including the bone and skin.  It looked hilarious, but the concept is actually amazing.  First of all, you understand which part of the chicken you are eating.  Also, there was so much meat on the drumstick that you could have made two tacos from it.  The sauce wasn't too spicy and there was no added toppings... it would have been nice to have a little cilantro and chopped onion. 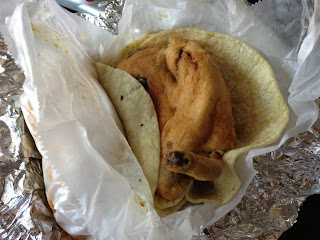 After thoroughly enjoying the chicken taco, I bit into the chile relleno version.  And immediately I knew... this is the last time I order a chile relleno taco.  For the second time in a row, I was extremely disappointed in the one vegetarian option other than rice and beans.  The chile relleno was the typical poblano pepper stuffed with cheese, breaded, and deep fried.  Unfortunately, there was an odd smell to the poblano and the cheese wasn't heated enough to melt it.  The breading was soggy and didn't add anything to the taco.  To be honest, this without question is the 2nd worst taco I have ever tasted.

The DOs/DON'Ts:
DO:
- How to Order:  The set up appears to be cafeteria style... so just walk up to the sign that says "Order Here" and then either point to the dishes or just order something off the menu.  There are no names or descriptions of the dishes so it helps to ask or just know what you want prior to staring at all the food.  Also, it appears you can turn any of the dishes into tacos.  And, the tamales can either be purchased by the dozen for $11.00 or individual for $1.00.  I guess that means you can mix and match.

DON'T:
- Don't get confused... There is a grocery store next door which is NOT the restaurant.  Walk a few more feet down Blue Island and you will see the restaurant.

Posted by Joseph Esparaz at 5:55 PM