A Quick Word:
When restaurants in the city want to try the whole farm-to-table concept... they should all learn from and dine at Nightwood.  This neighborhood restaurant, located on the edge of Pilsen, defines what "farm-to-table" should be.  By sourcing their ingredients from both local and neighboring state's farmers, Nightwood supports small business and delivers fresh meals to its customers (aka foodies like me.)  Their menu is printed daily with slight modifications depending on what their chef's can get their hands on... a concept, which most likely helped them win their most recent award--Food and Wine's Best New Chefs.  The atmosphere of the restaurant is what I like to call farmhouse elegance.  A simple structure with both indoor and outdoor seating is located in a neighborhood not really known for gourmet eats.  Waiters and waitresses are dressed in everyday clothes, but are as attentive as if they were in suits and ties. The meals are plated beautifully and the flavors are indescribably amazing.  All in all, I now consider Nightwood as my new favorite restaurant in the city... and for that reason, a 5 mile rating was given!  A must try! 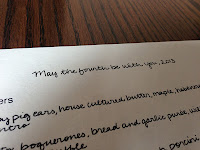 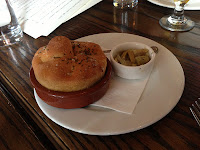 (Left: Menu is printed every day with dishes reflecting what ingredients were available.
Right: Homemade focaccia with pickled onions and artichoke) 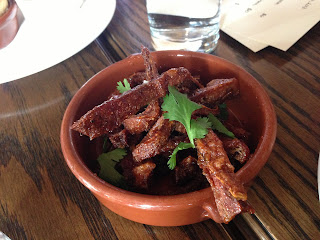 After quickly glancing at the menu, I knew crispy pig ears was one of the appetizers I wanted to try.  These thinly sliced pig ears, (first of all, they do not resemble pig ears at all), are deep fried until a dark golden color.  They are extremely crispy and lightly seasoned with a little butter, maple, habanero, and cilantro.  Personally, I thought the flavors were perfectly balanced with a nice oily char adding additional flavor.  The habanero was more on the non-existent side, but there was a mild sweetness that I could taste.  Definitely an appetizer to try! 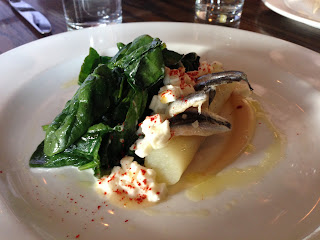 This appetizer is difficult to describe.  So if it helps, just stare at the picture.  Anyway, a potato cylinder is separated from a wilted spinach salad by chopped burrata cheese.  The potato is topped with boquerones which are salted fish (similar to sardines or anchovies).  A garlic puree and truffle oil tops the entire appetizer, almost like a salad dressing.  I personally loved the creamy cheese and the salty fish.  It was a great combination. 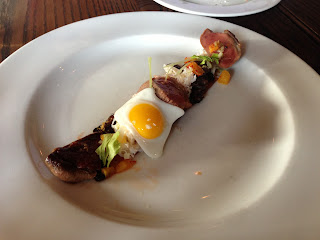 The last of our appetizers was the pigeon.  This isn't your ordinary street walking bird, but rather a dish that combined farm-raised pigeons, dungeness crab, walleye liver, morel mushrooms, and membrillo (which is a pear like fruit).  The presentation was gorgeous... a simple line of alternating ingredients.  A sunny-side up quail egg was the main focus for garnish.  The pigeon was cooked to a medium rare and paired nicely with the seafood spread.  The walleye liver was very fishy, maybe too fish for some.  The mushrooms added a woody flavor while the fruit was I thought overshadowed by the fish liver.  I really enjoyed the appetizer, but it may be a little on the exotic, strange side for some. 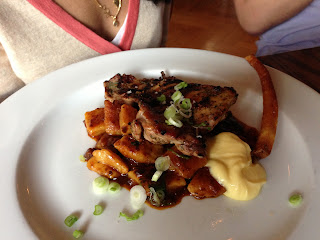 My brother's fiancé chose the chicken dish for her meal.  The chicken was wood-grilled and served with a potato-honey-yeast gnocchi with a lemon-mint yogurt sauce.  Usually whenever I see grilled chicken, I hesitate to try it because of the high potential for being dry.  The chicken at Nightwood was far from that... in fact, it had a wonderful sauce and was very moist.  The gnocchi had more of an earthy flavor maybe from the yeast?  Anyway, the dish was good sized, but very safe.  Nothing too exotic on this plate. 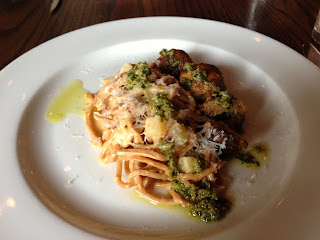 This night, I decided to go beyond my normal scope of dishes and try the pasta dish.  I had heard great reviews about their in-house made spaghetti, so I figured I couldn't go wrong.  And, I didn't.  The spaghetti was a spin on an Italian classic, but rather than typical tomato sauce and pork/beef meatballs, it was made with veal meat balls and a tuna sauce.  It was also topped with fresh pine nuts and a twist on pesto that utilized plenty of garlic, parsley, capers, and lemon.  The pasta was excellent.  It tasted like a whole wheat pasta and was cooked al dente.  The tuna sauce reminded me of a gourmet tuna helper and the caper, parsley, garlic puree was just enough acidity to mellow out the richness from that tuna sauce.  The portion was a little on the smaller side, but still enough to be considered an entree.  I am glad I tried something different. 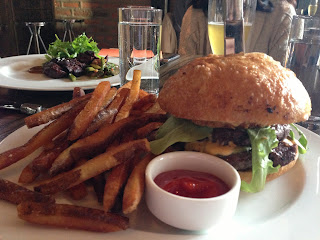 My older brother ordered the cheeseburger.  But this wasn't any ordinary cheeseburger.  Served on a cross between focaccia and ciabatta bread, two burger patties were topped with an 8 year aged cheddar, onion rings, pickles, and a special sauce.  It came with twice-fried french fries.  The burger was incredible... i absolutely loved the secret sauce (which tends to usually be a mayo-ketchup-spice blend).  The bread was one of the best buns I have ever had for a burger.  It held up real nice.  The fries were extremely crispy with the center potato still being soft.  Great burger for a great price!  We even ordered one to go. 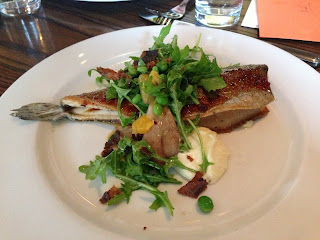 My mom chose to get the fish.  In her case, it was a Wisconsin trout that had been de-boned and pan-fried.  It was served with oyster mushrooms, west coast peas, a small arugula salad, and a garlic aioli.  Personally, I thought this dish was the best of the night.  The fish was extremely fresh and the preparation involved leaving a perfectly crisped fish skin.  The peas were interesting... more firm and crunchy then the typical mushy peas everyone is used to.  The arugula and garlic aioli added both a peppery and fatty component to the dish.  It was a perfect balance.  If you love fish, you will love this dish. 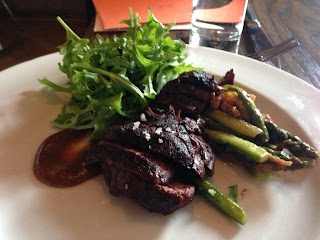 My dad decided on the one steak dish Nightwood offers.  Cooked medium (which is a little on the done side for me), the steak came out with a small arugula salad and something called Shae's Weird Sauce.  This sauce is supposedly made out of pureed oysters and mushrooms I believe.  Overall, the steak was just OK... it wasn't as tender as I was hoping and the grill flavor was very prominent.  The dish wasn't bad, but nothing incredible. 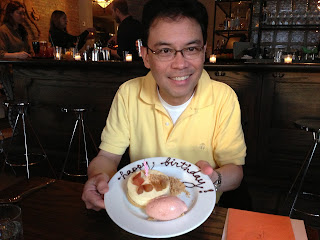 As you can tell from the picture, we decided to dine at Nightwood for my dad's birthday.  Prior to arriving at the restaurant, I called in to let them know it was my dad's birthday and they were happy to accommodate.  After selecting our desserts, they added a special message to the plate of the rhubarb and ginger cheesecake.  This cheesecake was made with whipped mascarpone cheese and topped with both candied rhubarb and ginger.  It came with a scoop of homemade rhubarb sorbet.  The sorbet was smooth and refreshing, especially with the recent hotter spring days.  The cheesecake was surprisingly light with the crust not being as great as I wanted.  In fact, the crust was subpar... not much flavor and sort of hard.  Maybe switching it to a graham cracker crust would make it better?  Just a suggestion. 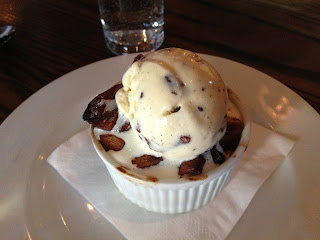 This is definitely one of my all time favorite desserts.  The bread pudding is made from pretzels, giving each bite a contrasting texture.  The outer edges were crispy and the center soaked up all that cream, making it soft and rich.  If that wasn't enough, a layer of chocolate was also baked into the bread pudding and it was all topped with a homemade pretzel ice cream.  I love this dessert because it wasn't overly sweet and if you wanted sweeter, just eat more of the chocolate.  The dish comes out extremely hot so just be careful... and eat the ice cream before it completely melts!

The DOs/DON'Ts:
DO:
- Do come early and be prepared to struggle finding parking... I don't think they have valet service.
- Parking may be easiest closer to Halsted and 15th or on 16th street.  Street parking is free and maybe a two block walk to the restaurant
- Make reservations early... this place fills up quickly, especially on weekends.
- Save room for dessert! They are incredible

DON'T:
- Don't dine too early at this restaurant.  They open I believe at 5:30pm and there is an awkward silence for early diners.

Posted by Joseph Esparaz at 6:27 PM