A Quick Word:
One of my "go-to" meals is from the incredible BBQ King House in Chinatown.  A few years ago, this place used to be a small, dark Chinese BBQ store... but NOW it is not only a restaurant, but one of the BEST places for Chinese BBQ in the city.  With dozens of meat options hanging behind the glass, it is so hard to walk by this restaurant without stepping inside.  Once inside, you are greeted by an extensive menu with some of the most reasonable prices I have ever seen.  A pound of meat tends to be under $10, while ducks can go for under $15.  They have ribs, wings, livers, squid, and much more... all of course cooked with an Asian twist.  All of the food is incredible, and if you don't believe me, just show up and observe the long line and the individuals that spend hundreds of dollars ordering pound after pound of meat.  It is hard not to give them a perfect rating, but I decided to give a 4.5 mile rating because of the inconsistency with one of their dishes. 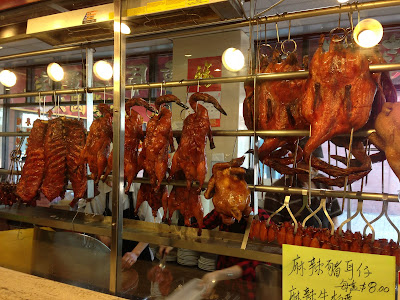 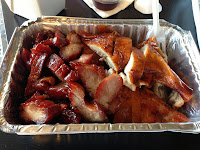 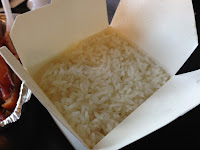 When it comes to Chinese BBQ, I find it difficult to choose just one type of meat.  One of my buddies and I split a pound of BBQ pork and half of a roast duck to satisfy two cravings.  The BBQ pork is incredible at BBQ King House.  They have a perfect meat to fat ratio... with just enough fat to add that rich flavor to every bite.  The meat has an incredible sweet glaze giving that traditional red color to the meat.  When ordering, the BBQ pork comes in long strips, and after ordering, a skilled butcher chops the pork into bite sized slivers.  Definitely order a side of white rice and enjoy this tender meat.

Now for the roast duck.  I absolutely love the duck from BBQ King House.  You can order either a half or whole duck at a very reasonable price ($8 or $14, respectively).  The duck has been slow roasted until extremely tender.  The skin initially has a nice crispiness, but unfortunately that is only preserved for a short time until packed into the "to-go" containers.  The meat is extremely moist with a soy flavor prevailing.  It comes with a side of sauce, which I prefer not to use.  The only difficult part about this meal is the bone aspect of each piece.  Before being served, the duck is chopped into more manageable pieces with the bone left on.  I also suggest white rice with the duck so you can let the meat shine the way it was meant to be. 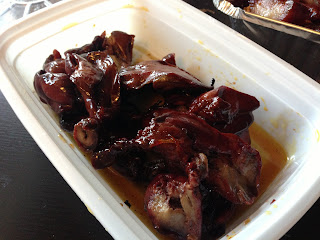 Ever since my mom introduced me to these BBQ chicken livers when I was little, I have been hooked.  Unfortunately, there is a huge similarity between ordering chicken livers and gambling... you never know what you will get.  The BBQ chicken livers are glazed with the same sweet sauce that covers the BBQ pork.  However, these are significantly harder to cook.  They are either cooked perfectly where the fat drips off the livers and the richness is indescribable OR they are drier than beef jerky (with majority being the latter).  Surprisingly, this time, I was given a little bit from both ends of the spectrum.  Livers definitely need white rice to enjoy otherwise the flavor becomes too overwhelming.  Be careful when ordering and I suggest ordering only 1/4 or 1/2 pound maximum.  Be adventurous!

The DOs/DON'Ts:
DO:
- I highly suggest ordering by the pound rather than off the menu.  They offer items over rice, but the amount of meat is dismal and more expensive compared to ordering a pound at a time.
- Small size of rice is enough for 1-2 people.
- Usually plenty of street parking around the area.  If not, a couple huge lots service the Chinatown area.

DON'T:
- Be skeptical about ordering chicken livers.  Inconsistency can haunt you.